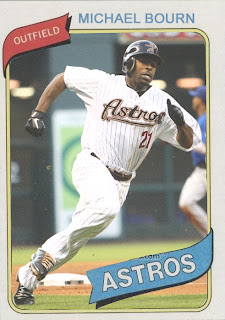 Mike over here was the number one outfielding prospect for the Phillies back in 2007. Of course, knowing Ruben Amaro Jr.'s way of telling prospects their futures, you can already tell what happened. Michael Bourn, along with several other prospects deemed "too good" for Philly, were shipped to Houston, for a seemingly washed up closer named Brad Lidge. Although looking back on it now, it seems as though Houston got the better end of the deal.
Bourn has been playing beautifully for the past 2 seasons, even making an all star team last year. If he remained with Philly, he'd be the current centerfielder, Ben Francisco would be his backup, and Pat Burrell would be an Astro.
Coming Tomorrow- like Michael Bourn, this guy was a promising prospect, until he was sent to No Man's Land, aka Toronto, where it all changed for the better.
Posted by Jordan at 2:55 PM
Labels: Astros, Custom Cards, Michael Bourn