It's Impolite to say 'Bunt': Why Topps Bunt is the Wrong Future of Collecting 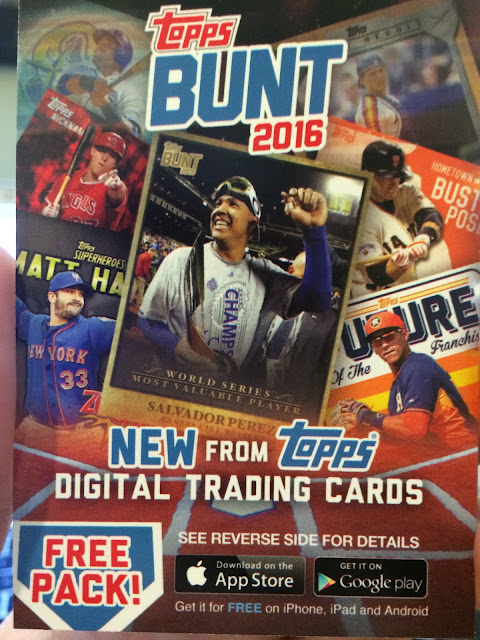 I pulled this in one of my packs of 2016 Topps yesterday. It appalled me for a few reasons.

1. If people are saying the photoshop jobs are obvious in the 16T flagship, then they should get a load of these, especially the Correa insert. No effort to dial it back.
2. This brings forward an especially horrifying notion, one I'm going to talk about in this post.

2016 Topps has been criticized by literally everyone on the blogosphere, and for good reason. One of the most frequent criticisms is that the base design looks WAY too simple. Like, smog notwithstanding, it's just an MLB crawl and some shiny. There's not a ton to it.

And, as some people have pointed out, there's a reason toward this. Topps has realized that their business is coming less from people buying actual, physical packs of their products (you know, the way it should be), and is coming more from people using their digital app, Topps Bunt. So, in order to remedy this new direction of sales, Topps has made their base design simple enough that it can be reproduced for Bunt. Matter of fact, 2016 Topps is the first Topps Baseball Card set designed for the sole purpose...of NOT being collected as baseball cards.

It's painstakingly obvious. The lack of foil. The lack of originality. The zooming in of all of the photos. The even-more-boring inserts. The indistinguishable parallels. Topps has mass-produced and collated this set merely as an afterthought, knowing that they're only doing it for the older generation. Topps, who were so focused on attracting the younger demographic five years ago, through physical cards, have given up entirely, and have gone to just winning over that demographic by becoming something they very clearly are not.

Oh, sure. I talk so much shit about Topps Bunt, how it's detrimental to old-school collectors, and how it's ruining how Topps produces its cards. But I haven't even talked about how the app is from the inside, how it works, what it does. So I'm certainly one to talk.

I was an avid user of Topps Bunt for approximately one month. I joined around January 2015, and deleted the app sometime around the middle of February 2015. I wanted to see what the fuss was about, so to speak.

Topps Bunt nearly derailed my savings account and damn near ended my blogging career. So yes, I am one to talk. And talk I will. Until my lungs freaking burst.

Like I said, I joined in January 2015, during the offseason. I had no choice but to start accumulating as many packs as I could, but there was no easy way about it. In-app credit was generated on a day-to-day basis, with a special bonus every Wednesday, and that was no way keep nabbing packs regularly. So, more in-app credit could be purchased with actual money. Now, Topps got this from other apps, I assume, as Temple Run or Angry Birds would sell things like hints, or more saves, or little extra items, for a couple actual dollars. But they weren't things that were invaluable to the game, like...all of the cards you were supposed to collect.

If Topps wanted people to actually collect the set without breaking the bank, they would go for the 1970's route, and put 20 or 30 cards into a 99 cent pack, or put 12 cards into a 3 dollar pack with parallels in it. But the Topps people, obviously, are not fools. They know that kids aren't buying physical packs, and they want money. So what they do here, which is genius and infuriating, is they stock packs at 5,000 coins, or 10,000 coins, or even 15 or 25,000, which is the equivalent of 25 bucks, so that the only way that kids can keep collecting the ultra-rare inserts is if they constantly have to borrow from their mom or dad's debit card, and keep feeding money into the cash cow that is Topps Bunt.

Now, replace mom and dad's account with a newly bolstered debit account, that I was saving for textbooks, and replace a 10-12 year old kid with a 19 year old kid who hadn't realized anything was wrong yet, and you have the makings of a disaster.

I didn't realize it at the time, but I had developed a small-scale gambling addiction. I would feed money into my Bunt account, at the promise of being 'with the times' and ripping digital packs just to have the latest insert sets completed, and then keep trading the rarer ones away for newer stuff, while keeping the autographs I would pull (on occasion) ultra-safe and locked. This process kept going on. I'd stomach the younger (or even older) kids who would ridicule me for "not knowing how to trade", even when I was trading my unwanted goods for their unwanted goods, which was, by Webster's definition, exactly what a trade means. I just kept going, kept getting more cards, and keeping in the bubble.

The problem was I didn't have time for many other things around that time. My blogging around that February slipped (just as bad as this February, only this February my excuses are "there was nothing worth blogging about" and "class fatigue"), because I had no real interest in writing, or picking myself out of BuntWorld. I collected some physical Topps, and I loved the 2015 set, but part of me was secretly wondering what it would look like in the Bunt app.

I honestly forget what caused me to delete the app, but I imagine it was a sudden realization of what it had done to me (and, more importantly, my bank account). I had allowed Bunt to scrounge itself into my brain and stay lodged their until I had no choice but to claw it out from the inside.

The main problem with Topps Bunt is that there's no moderation. There's no limit. A person can feed a lot of money into the app every day, and get more cards for themselves everyday, because there is nothing stopping them. There are packs available to buy everyday, with new and exciting bonus packs appearing at some times, and special, more expensive packs showing up randomly.

In real, physical life, there is a limit to how much Topps cards you can buy, because getting Topps cards involves going to a card shop, or a Target, and getting some cards, in moderation, and paying for them at the register. Topps Bunt didn't have that. There wasn't a register to pay for everything at once. You just pay whenever you want something, and there was nothing to stop you from wanting to buy the packs, because there was no geographical difficulty to getting more packs every day.

If I went to Target every day and bought $50 dollars worth of baseball cards, not only would it render me bankrupt very quickly, but there would be a social stigma about it. Because eventually someone would see me going to Target every day, and getting a lot of cards, and comment about it. In some semi-concerned-but-mostly-observant way, someone would say 'this isn't the first time I've seen you here', or 'welcome back', or 'that's a lot of baseball cards for one week'.

There's no social stigma in Topps Bunt because there are not other people around you when you buy packs. Nobody else in Topps Bunt can see how much you spend, how many coins you have. No one is there to stigmatize you for what you are doing except, eventually, you. And you don't realize it until you have to pull yourself away from the picture for a second, examine everything, and realize how wrong this is. Which is what I did.

Part of the problem is that I've never gambled, or had anything like this, so I didn't know going in that I needed to control what I put in. But, if I remember correctly, there is no disclaimer ANYWHERE in Topps Bunt that says 'remember to spend responsibly', or 'you should probably control how much money you put in.' Because anything that would end in Topps getting less money is bad for Topps.

So, in a way, Topps is promoting gambling, for their own personal gain, without a real care for what happens to people who put too much money into the app, especially if they're young kids spending their parents' money. They do not put thought into this, which is a horrible thing to grasp.

That somebody could go 'Yes, people are losing money, yes, kids are being conditioned to gamble at a young age, but on the plus side, we're finally winning the child demographic, so what's there to worry about?' This breaks my heart.

All of this in mind, Topps is restructuring their organization so that it's more geared toward things like Topps Bunt, and less towards actual, physical packs of Topps, which uses moderation, and is a lot safer for younger kids to get into than Topps Bunt. And yet Topps doesn't understand that it's got the exact wrong priorities, and that putting more emphasis on Topps Bunt is a mistake unless Bunt is restructured to be less of a cash cow and more of a direct simulation of actually buying packs of cards.

Topps Bunt cannot be 'the future of collecting', as Topps is leading us to believe, because if so, the next generations of card collectors are going to learn the lesson I learned eventually, and not want to collect cards at all, be it digital or physical. If this process, the one that I succumbed to, keeps going on unaddressed, Topps is going to lose a ton of prospective collectors, future and current, physical and digital.

They damn near lost me as a customer, and it took some overwhelming response from a grand majority of their products last year to keep me buying. But Topps needs to seriously rethink its priorities, or at least do something about this problem as soon as possible. I know it took me a year to report on this, but I wanted to wait until it would be relevant. It's relevant now, because Topps wants you to believe that Topps Bunt is the future.

Well, if that's the future, I think I'd be better off living in the past.
Posted by Jordan at 11:35 PM

Labels: call to action, damn this guy can actually write!, editorial, Ranting, Topps Bunt, who exactly thought this was a good decision?