Oh, By the Way, Customs are Back 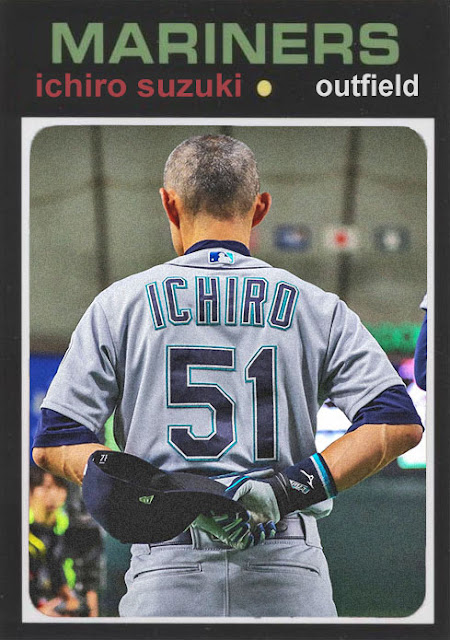 I was kinda worried back there.

About a month ago, I faced a dilemma about my photo source for customs, as it wasn't giving any MLB updates, and I thought I'd have to stop doing customs. Which...was not preferable. I mean, I love talking about baseball, but the customs are my means of doing so. Y'all are here for analysis, but a thumbnail looks nice, too. There's a reason so many blogs have worked both the writing AND visual angles, and succeeded. And I didn't want to be left without visuals.

So I found another source. This one is a little more strenuous, on my part, to accumulate, but it's a system that I can get well into, and will make the eventual process of photo selection a ton easier, especially during Uncustomed Heroes. I'm gonna try to get on a good routine in production before I can go back to my two-per-day routine, but at this rate that'll probably happen quite soon.

I usually save the First Custom of the Year for an amusing acquisition, a rookie, or a Japanese import, but...I went for Ichiro.

Ichiro's been in the leagues as long as I've been making customs, and he's definitely one of my favorites. You can't NOT love somebody whose style of play is almost entirely based around contact. Last month, as Ichiro began to make his final appearances, I thought I was about to make mine. But I found a way.

Having seen Ichiro's final game, and how emotional it was for everyone involved, especially the man himself, I couldn't not commemorate the man. Even if I'm starting right off with a retired player...it's someone I respect. And we all do.

So, it's official. Customs are back. And so am I.
Posted by Jordan at 2:57 PM
Labels: Custom Cards, Ichiro, Mariners