The Tournament of Bad Autos- Round 2

This one is long overdue (I think- Drew just posted his so I'm following suit.), but so what if I'm late. Only a true master shows up late to his own party. So here we go with round two-

First off, Jason Jennings, seeded 1st, is here to show another reason why he sucks

Amazing. You'd write like that too if you were paid by Texas to pitch and couldn't keep yourself out of the DL

And he's up against the 8 seed, Mike Minor

Is it possible for a signature to be suffocated?

Nest is Melvin Mora, our 5 seed.

His adversary is a tough one- Johnny Cueto, seeded fourth

More likely to have a "Hello, my name is" above it
Here's our 6th seed, Luis Castillo, who surprisingly was just benched today

And I believe the lasso in his signature benched him

And in a borough vs. borough battle, his opponent is a Yankee, our 3rd seed, Nick Swisher!

Amazing. The only baseball player whose name is in the Torah
For our final matchup, it's outfielder v. outfielder. First, 7th seed Curtis Granderson

His signature is also a radio apparently
And the beast he has to slay... 2nd seed Bobby Bonilla 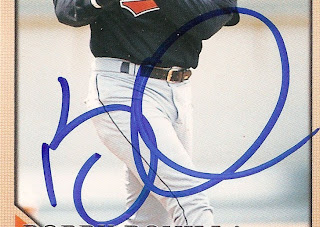 He signed this for Auntie Annie
Well, I've done my duty- your task is to do yours and VOTE! I'm too lazy to post links to Drew, JT and OnCardAutos, but you know how to get to them anyway. Polls are on the sidebar!
Posted by Jordan at 6:26 PM
Labels: Tournament of Bad Autos