2011 Achievements: Taste of the NFL

I am many things: a bragger is not among them. Despite the fact that blogging is meant for showing off your acquisitions to the general public, which is generally bragging, I rarely get to show off things that I am priveleged to have. This year, because it was a pretty big year for me, I'm proudly displaying some of the baseball/football related achievements I pulled over the course of the year. With pictures, too. 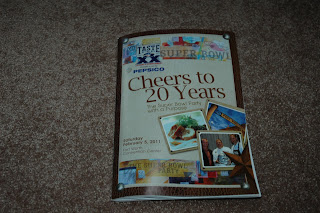 I have told you many times of my trip to Dallas in January to watch Green Bay defeat Pittsburgh, and I have campaigned for its legitimacy even more. Therefore, here is proof: The night before the Super Bowl, my father got tickets to a high-end NFL Event: Taste of the NFL. And when I say high-end, it was classy to the point that I wondered how the hell we got tickets in the first place. Around the convention center, there are stations with every NFL city, and a classy food dish from each. The food's appeal to me, a normal human being who only dresses in a suit every once in a while, varied. But knowing me, and knowing the event that would take place the next night, you can already guess that it was about more than food.

At each station was a former (or current) NFL player. Also at each station: a sharpie. That's right- you had the option of getting an autograph of a bunch of NFL stars. Some people went for grandeur, in getting the players to sign a ball, which itself cost about $100, no joke. But I, being a simple human being who takes what he's got, wanted to up the importance of the program given to me at the door, with pictures of every NFL player in attendance- perfect for signing.

To make a long story short, I got quite a few autographs that night. I'll go through all the ones I got, and didn't get. 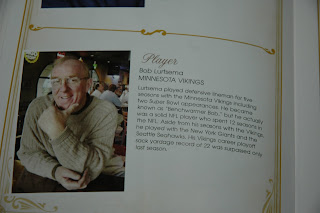 Bob Lurtsema, also known as Lurtzy to his friends, was the famed leftover defensive lineman for the Vikings of the 70's, always overshadowed by his teammates at the same position. My dad met Benchwarmer Bob while on a shoot with members of the 70's Vikings team, who were working in a gold mine. The reason for not getting Bob's auto was simple: He was in a hurry, and had to leave his station before I got there. My dad and I talked with him later, and while I didn't get a signature, I got a nice conversation, which is still pretty cool. 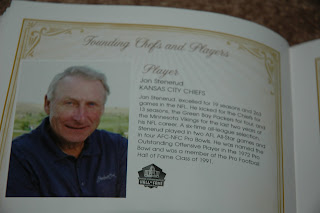 Jan Stenerud was another one signing, but the line for him was quite long. Apparently, when you're from another country and you're the only kicker in the Hall of Fame, a lot of people respect you. 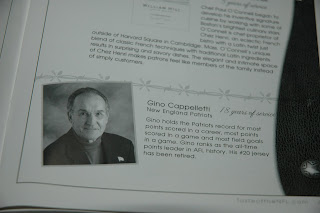 Others I missed because I couldn't find their booths. Gino Cappelletti was one of them. A New England legend, Gino would have been a decent addition to the book, had I found him. 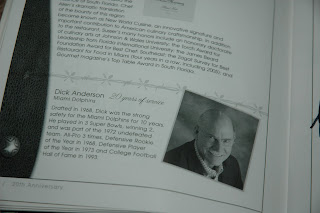 Another one of the lost players: Dick Anderson, who had been with the event from the start. 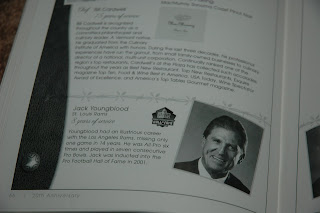 Jack Youngblood was going to be one of the next auto's I'd get, but I was interrupted in order to find the Philly station, to try the out-of-this-world brisket. Sadly, I never got back to Jack. 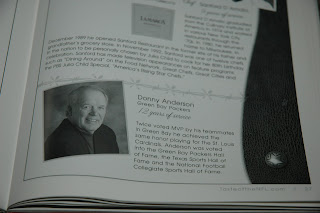 And sometimes, the sheer realization of who is about to vy for a championship made it difficult. Because of the large scale amount of Packer and Steeler fans, I couldn't get to either of the players. Danny Anderson would have been a nice one. 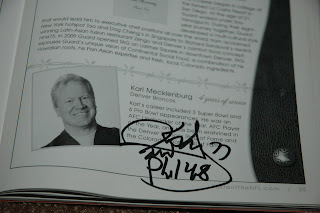 Upon my dad's request, I achieved the autograph of Karl Mecklenburg, a former Denver Bronco. Karl was very polite in signing, and seems like a nice guy. 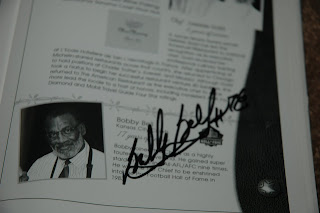 I don't remember too much about Bobby Bell, but from what I can recall, he seemed like a nice guy. One of my goals was to snag all the Hall of Famers, so Bobby was a plus. 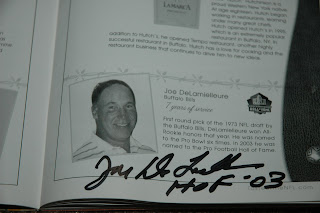 Joe DeLamielleure, a former first round pick and Hall of Famer, was another nice acquisition. 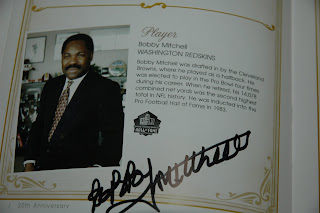 Bobby Mitchell, one of the first African Americans to play for the Redskins, was a guaranteed auto, as soon as I realized who he was. He wasn't very happy, for some reason, as I remember. 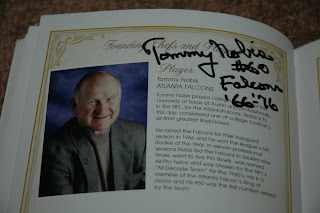 Tommy Nobis was another interesting find. Nobis, Lurtzema, Stenerud, Mitchell and Floyd Little were among the founding members of Taste, which is why they had their own special section. Nobis was a nice guy. 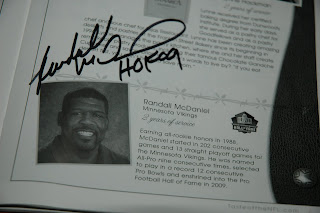 Out of everyone, I'd say that Randall McDaniel was the funniest. When I gave him the program page to sign (which has a picture of the chef on it as well as the player), he pointed to the chef, and said "This ain't me!" I chuckled, as I pointed to the picture of him, which he gladly signed. One of the few Hall of Famers that were actually recent. 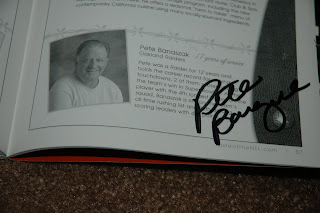 My dad, having been a Raider fan, was looking forward to Pete Banaszak. As he signed the page, I said to him "by the way, that touchdown you had in the Super Bowl....made my dad's LIFE!" 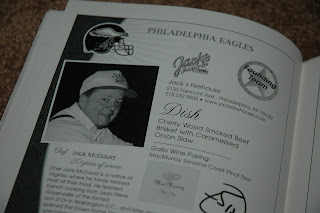 Before I get to the Philly player, I have to go over the chef, whose restaurant I had actually heard of. Jack's Firehouse is in Philly, and the brisket they had at Taste was very very good. 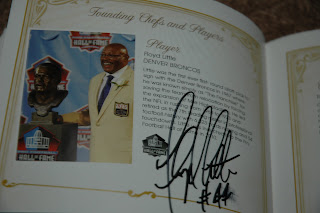 Floyd Little, out of all of them, may have been the nicest. He was the newest Hall of Famer at the event, and he seemed quite happy. 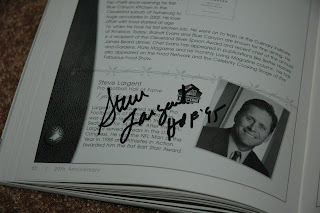 The biggest star at the event was Steve Largent. A Seahawk legend, and my uncle's favorite player. After a long line, I got to the front, and explained Steve that my uncle adored him. I eventually got a picture with him, which we sent to my uncle. But the autograph from Mr. Largent may have been my favorite out of all of them.

Well...that's enough bragging for one post. I'll do another one of these later on, only cards will be involved. Actual cards!
Posted by Jordan at 3:43 PM
Labels: football, Hall of Fame, Super Bowl, Taste of the NFL