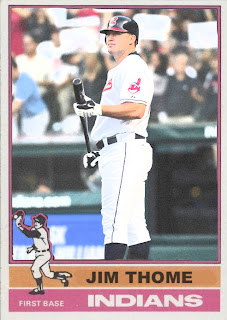 For two years of my life, Jim Thome was my favorite player.

During my youth, I knew next to nothing about baseball. Due to my father's "root for the Yankees or sleep on the roof" policy, I had no choice but to root for Jeter. For a year or so, he was my favorite player. Of course, a year later I went to my first Phillies game at Citizens Bank Park. Myself, my friend Nick, and my folks sat in our seats, anxiously awaiting the team.

Jimmy Rollins was the leadoff hitter back then. Keep in mind that these were the days that J-Rol was quick enough to lead off. After him were Polanco and Abreu. Batting fourth was the star of the show. The crowd cheered as he stepped to the plate. The stadium bore his number, and the kids were carrying mini bobbleheads of his likeness (I still carry one in my room). Jim Thome was at the plate, and in 2004 Philadelphia, nobody else was bigger than him, in both senses of the word.

I forget if he hit a home run or not that night, but I remember thinking that he was an awesome hitter, and a great player. I thought that no other human being could replace the man at 1st base. And from 2004 until the day he was signed by Chicago, Jim Thome was my favorite player.

After that, my attention switched back to the Bronx, as Jeter and A-Rod ruled the throne. I still rooted for the Phils, but since Thome had left, my attention had waned. Ryan Howard had taken the irreplaceable position, and while he was excellent, he just wasn't Thome. Of course, when the Phils took it all in 2008, I cheered for them. I cheered every year for them, but it was a shame Thome couldn't celebrate with them.

Yesterday, I was sitting on the waiting seats in a Mexican restaurant far from home. I was tired, hungry, and after a long night, was hankering for a Sprite. As I was relaxing on the seats, my dad nudged me, and pointed to the TV Screens. I squinted to make out what was going on at ESPN, though Jim Thome's face graced the screen.

I slowly read the words aloud: "Thome to sign one year deal with Phillies." And at that moment, despite the fact that I was in Yankee country, I let out a cheer. I was so happy that my hero was back in town, and that he could hit for us again. Howard might be hurt for some of the season, so Thome will get his throne back.

Jim Thome will most likely retire in Philly pinstripes. And that's an idea I can get around.
Posted by Jordan at 8:36 PM
Labels: Jim Thome, Phillies