Another Year, Another Young Frankenstein Reference 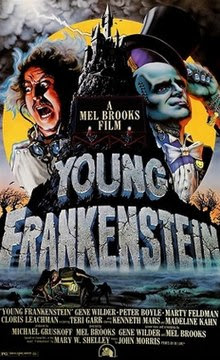 (Dr. Fronkensteen rings a bell. Two doctors roll in a gurney, carrying AJ Burnett. He does not look like he's pleased to be part of this demonstration)
Fronkensteen: Mr. Burnett here, who has never pitched for my ballclub, nor have I given any instructions to him, has graciously offered his services for this afternoon's demonstation. Mr. Burnett, will you hop up on your feet and stand beside this table.
(AJ does so, though it takes him a few tries)
Fronkensteen: Nice...hopping.
(He motions for AJ to turn around).
Fronkensteen: Mr. Burnett, will you raise your left knee...please.
(AJ Does so).
Fronkensteen: You have just witnessed one of the few things Mr. Burnett still knows how to do. He has sent a nerve impluse to his brain, which then sends it back to the spinal cord to the leg, obviously passing the defunct right arm. Mr. Burnett you may lower your knee.
(AJ Shrugs and lowers the knee)
Fronkensteen: Reflex movements are those that are made independently at will. This subject's best relexes used to lie within his right arm and left leg. You filthy yellow son of a BITCH!
(He knees AJ in the right arm. AJ is shocked).
Fronkensteen: We are not aware of thse impulses. Neither is Mr. Burnett, due to the fact that apparently his right arm can barely move anymore, according to him. But what if we block the impulse, or in this case, incoming baseball, by reducing pressure, which can be done with any ordinary ice pack just at the posterior of the nerve roots.
(He straps the icepack around AJ's neck. AJ has no idea what the hell is going on).
Fronkensteen: Let's give this a few seconds.....why you mother grabbing BASTARD!
(He knees him in the right arm again. No movement or reaction this time)
Fronkensteen: As you can see, no injury is seen. AJ is perfectly fine
(AJ's eyes wander around, as he can't control anything)
Fronkensteen: In spite of our mechanical magnificence, if it were not for this continuous stream of ice and wellness flowing into a normal, healing 2nd starter, HE WOULD COLLAPSE...like a PITCHER...IN...HOUSTON!
(He removes the icepack from AJ's neck. AJ falls back onto the table in agony, helped by the doctors and lone lawyer)
(There is applause. Fronkensteen turns to the lawyer)
Fronkensteen: Give 'im an option for 2012.

Happy Halloween. May your obscure references be funnier than mine.
Posted by Jordan at 6:33 PM