So Albert's an Angel 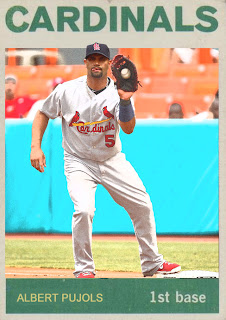 In case you haven't heard (all one of you), the biggest star in baseball right now is moving to LA. Clam down, it ain't Jeter. Albert Pujols, who has won numerous MVPs, a ROY, and a few gold gloves to boot, is now an Angel. Raise your hand if you saw that coming. No seriously, raise your hands. Gimme something.

When I first heard Albert was a free agent, my first thought was "He'll sign with the Cubs". Why? Cause he'd be going the route of every Yankee or Red Sock that had signed with the enemy: by pissing off the fanbase, and turning into an enemy. Also, because someone I knew kept bugging me when the Cardinals won the Series, and I sorta wanted him to pay for it.

Of course, being that I live near Philly, all my friends wanted him to come here. While I kept trying to be the voice of reason, by saying "How the hell could we afford him?", they were hell-bent. And when Philly was rumored to reenter the race today, after Miami dropped out (and instead recieved Mark Buerhle. I'm sensing a Doyle Alexander-esqueness), I thought "Jeez, we might get this guy."

That was early in the day. And now you know exactly where I'm going with this. I think it's essential that you all know how I found out about this huge baseball event.

Around 1:30, I'm sitting in History class as it's all winding down, quietly listening to my iPod (Hey, the man gave us a free period). I overhear a conversation between my history teacher and a few students, about statistics, involing Albert Pujols getting 400,000 dollars per at bat.

My first instinct: Oh brother. Somebody signed the poor guy.

So, being that I wanted to know what the hell happened, I walked on in, and asked "What, did somebody sign the guy?" A fellow classmate informed me of the amount of money and years he had been given. That wasn't what I asked for. I asked again "But who signed him?" To which my History teacher replied "The Angels."

This had come asbolutely out of left field to me. First of all, don't the Angels already have a first baseman or two? Mark Trumbo? Doesn't he ring a bell? He had a hell of a season, and now he's being benched for the biggest star in baseball? How must the guy feel? Secondly, there was the fact that Anaheim just entered the race last night, and never in a million years would I guess them the victors. So I was flat out surprised.

Then another classmate threw in the sweetner: "Him and Wilson are both going to the Angels." My first guess: "What, Brian Wilson?" I admit that I might have overshot a bit, but the classmate corrected my guess to CJ Wilson, who was the best pitcher in the AL as of...this year. It's Greinke all over again. What if Wilson ends up pulling a Kazmir and sucking his ass off for the Angels? Hadn't they put that into the equation? This is the man who has choked TWICE NOW in the World Series. And now he's joining Weaver, Haren and Santana, quite possibly the AL's answer to Halladay-Lee-Hamels, in order to round out the jab-straight-hook-uppercut of the LA rotation.

Either the Angels have the strongest rotation in the AL, or they have three good pitchers and an Oswalt. But back to Prince Albert. Not Prince, he'll get signed sooner or later, just Prince Albert.

Already, the Angels are a strong team. You have Torii Hunter and Bobby Abreu, who can hit for power, and you have Howie Kendrick, a remarkable infielder. Then you have the newbies: Trumbo, Trout, Bourjos, Conger: All four are pretty powerful, and are good, young stars. Add Pujols into the mix, and that awesome pitching rotation, and the Rangers have absolutely no chance to clinch next year. Which is perfect for me, since I hate the Rangers.

So this deal may be the most powerful deal in recent history. Not since the Yankees getting Teixiera and Sabathia, or the Phillies adding Cliff Lee to the rotation (the 2nd time) has there been a greater power shift in the game.

I'll end on this: The Angels are going to be good next year. What the Yankees need to do is be better than the Angels.
Posted by Jordan at 3:09 PM
Labels: Albert Pujols, Angels, Cardinals, CJ Wilson