And Now, Tony Eusebio for Water 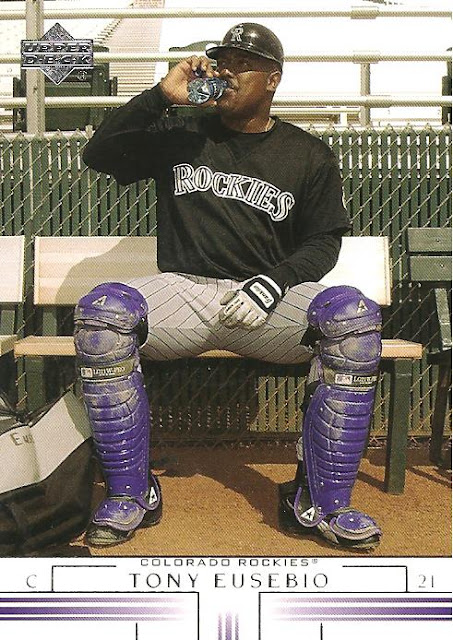 Hi...I'm Tony Eusebio. And I play catcher for the Rockies. But when I'm not doing that...which, incidentally, won't be a ton this year, I take the time by kicking back and drinking water.

Water: It's Good for You.

Wait...wait hang on. So...the Rockies already have a catcher? Okay. So I'll just play backup. And when I'm not playing backup, I'll be enjoying the refreshing taste of water.

Okay...I did not know about this. They already have a backup in Colorado? So...so they're starting Gary Bennett, and they just have Bobby Estalella as a backup? So...so I'm basically the backup for the backup?

Okay, I guess...I guess that's fine. Well, either way, I can still rest assured that the thirst-quenching taste of water will always be there for me.

Wait...okay...hold the goddamned phones here. So, they have Gary Bennett...then Bobby Estalella...and also, they're trading for Sandy Alomar Jr. halfway through the season?

DO THEY KNOW WHO I AM?

I'm Tony Eusebio, for shit's sake! I am Houston Texas! I have caught FIRE. ACTUAL FIRE. And your idea of REWARDING ME...is by hiding me behind people like Bobby Estalella? And Gary Bennett? Who the HELL is Gary Bennett? I mean, if you're gonna keep me on the team, at l-

You can't seriously be thinking of not inviting me to the roster. THINK ABOUT THIS. EUSEBIO NEEDS TO BE THERE. This would solve SO MANY PROBLEMS. I...I'm shocked. Appalled, even. I don't even know what to say.

Look...the Water people want an ad. They've been filming this ad all day, and I wanna at least give me something. So can I at least get something out of it? A back-page of a magazine? Anything?

(Sidenote- Would you believe that this is a zero-year UD card? I mean, one nobody thought existed, because...Tony Eusebio gets no respect. NONE.)
Posted by Jordan at 8:41 PM
Labels: 2002, Card Prompts, Tony Eusebio, Upper Deck, water