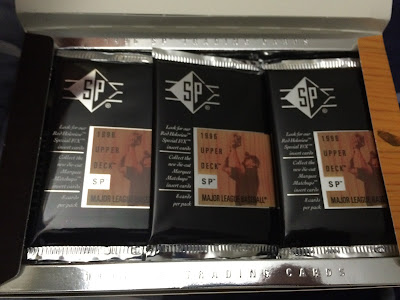 10 packs of SP left. This is a pretty cool box to rip, as the base cards are cool, and the stakes aren't especially high, and there's this charm to the set, a charm that UD had for a brief period in the 90's.

Onto the last bit.. 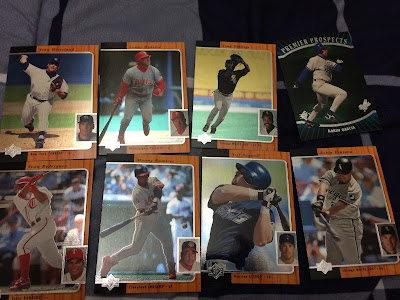 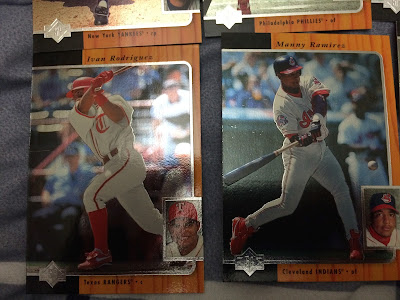 One of these two chuckleheads might end up in Cooperstown after next week. It's probably going to be the bloke on the left in the sweet throwback, but keep an eye out for Manny- more sportswriters have respect for him than you think he might deserve. 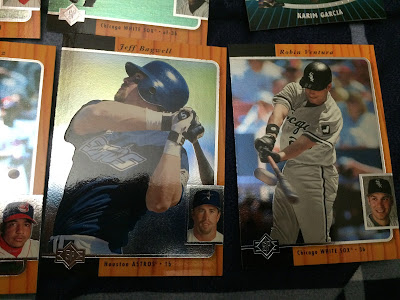 I do think Jeff Bagwell has the best Hall odds out of anyone- enough balloters are pissed about his 'just a few votes shy' outcome from last year, and want to rectify it.
Robin V tried, but Chicago seems to be moving on. 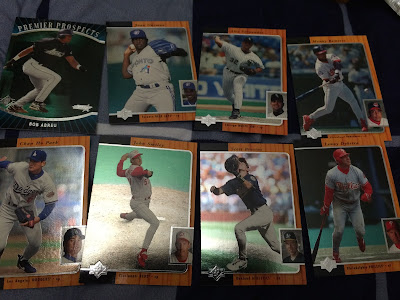 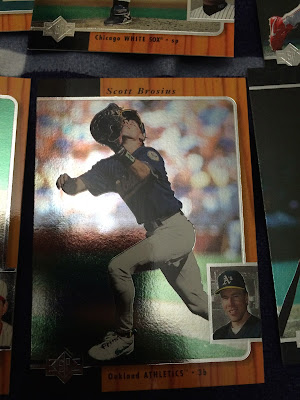 ..and it's just Scott Brosius, the only card in the pack that wasn't a dupe. 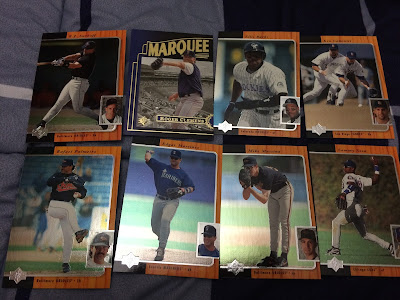 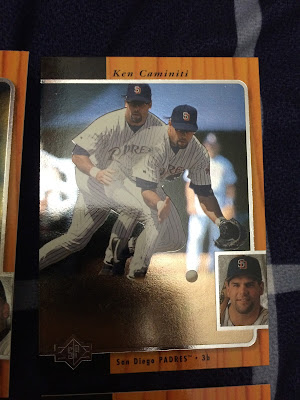 After a while, Ken Caminiti had taken so much steroids that there was two of him. 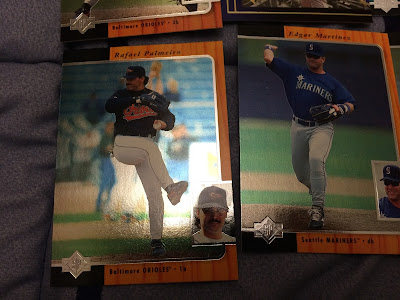 Rafael Palmeiro trying to pitch. Yeah, that'll go well. Edgar Martinez was also trying to pitch, I think...and it either went better or worse, as he's a better player, but a career DH. 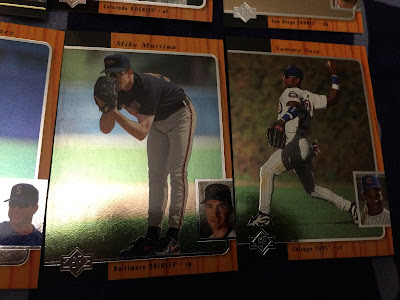 MOOSE. Nothing but respect, even if he's not especially HOF-worthy.
Sammy Sosa wishes he could have seen a year like 2016 while he was in Chicago. Not the case. 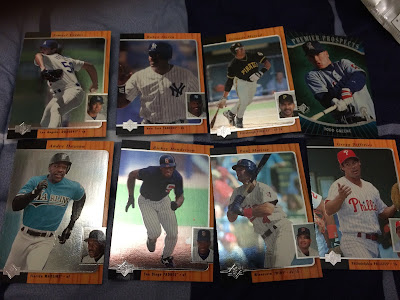 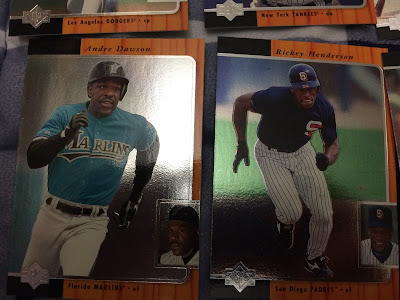 So much class here. Andre Dawson looked awesome in a Marlins uniform, even if his best years had passed by that point. I love pulling cards of him in that uniform.
Meanwhile, any card of Rickey Henderson in a non-A's uniform looks awesome to me, and this card of him on the Padres is no exception. 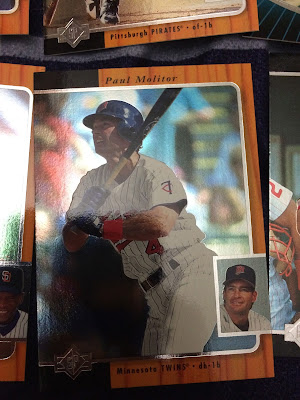 Paul Molitor had just landed in Minnesota, and would end his career in 1998 as a legend, mostly in Milwaukee but still. 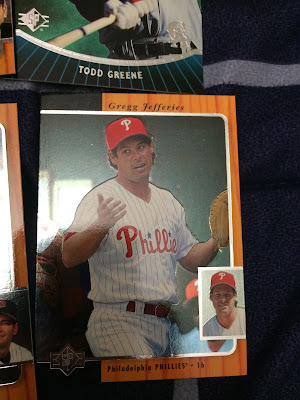 Gregg Jeffries did not take the last pizza roll, and he's getting defensive about it. 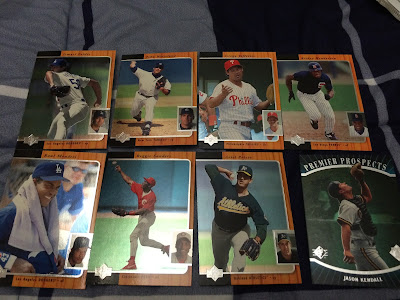 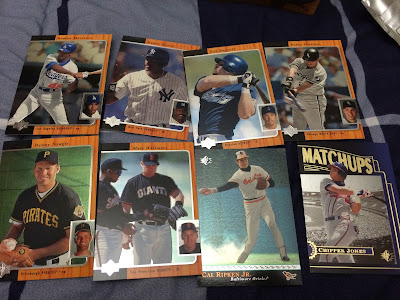 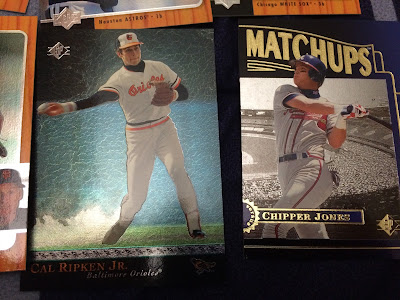 Cal Ripken got inserts all over UD products for his big 1995, and this is a pretty cool one, all glossy and nice.
Chipper Jones gets a Marquee Matchups insert, because he's that awesome. 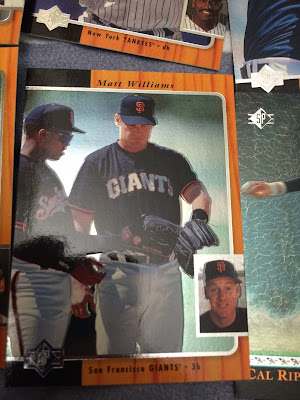 Matt Williams is informed by a coach that he won't be returning to Washington for the next season. 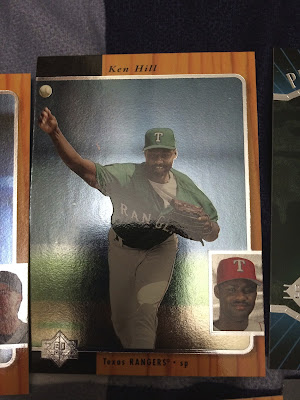 (I didn't take a group photo for Pack 27)
Ken Hill was on the Rangers, apparently. At least he looks cool in the St. Patrick's day uniform. 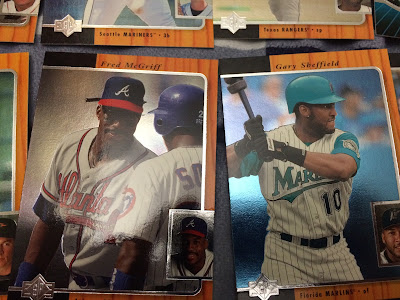 Two guys on the HOF ballot- Fred McGriff is arguably a bit more worthy of votes than Sheffield, but maybe that's because I'm biased and collect Crime Dog. 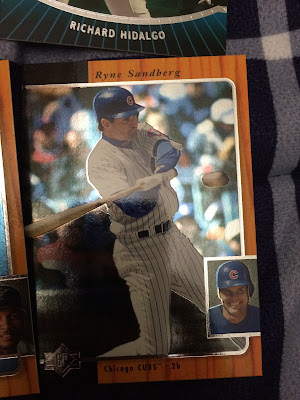 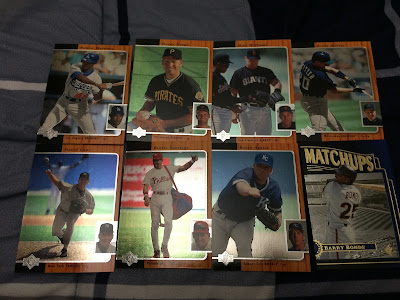 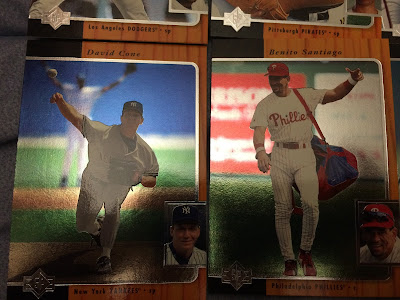 David Cone's first season in the Bronx was 1996, and man it was a good year to come in. Meanwhile, Benito Santiago seems surprisingly excited about joining the Phillies, way after their prime. 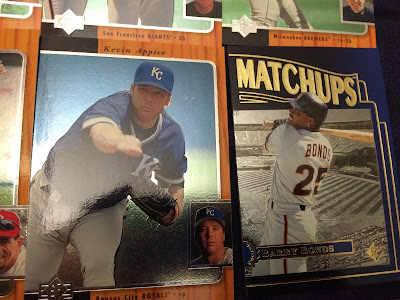 Kevin Appier's card is so awesome that hopefully it distracts you from Bonds' Marquee Matchups insert. 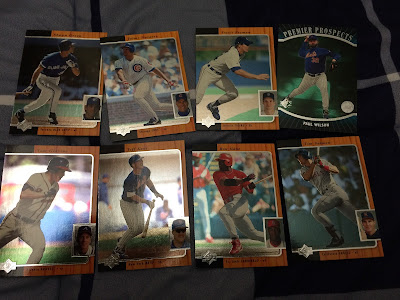 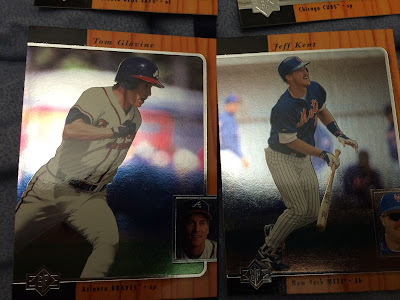 Tom Glavine is RUNNING. NOT PITCHING, RUNNING! Miracles never cease.
Jeff Kent is pissed because A.) the bunt didn't work, and B.) he got taken off of Survivor by Blair from the Facts of Life. 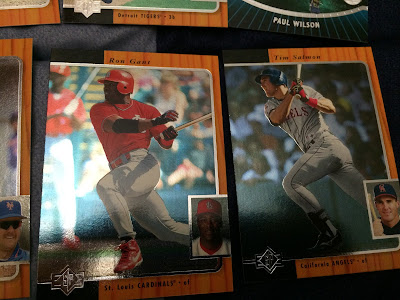 Ron Gant spent a few seasons in St. Louis (for some reason) as his star cooled down in the late 90's. Tim Salmon was still a relatively big deal in LA, but not as big as another fish-related outfielder would come to be 20 years later. 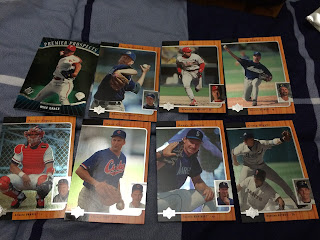 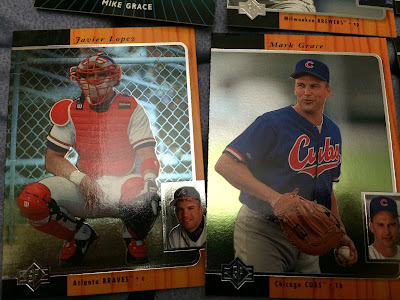 Javier Lopez, seen here before he learned how to hit. Mark Grace was one of the best hitters of the 90's...but since he played for the Cubs, that wasn't an especially big deal. 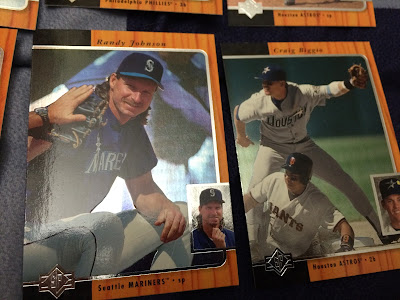 Two Hall of Famers to end the box- a pretty cool looking Randy Johnson, and a field shot of Craig Biggio.

So...that was 1996 SP. I have to see which Nostalgic Box Breaks haven't been done on the blog yet, and I might get to posting another archived one soon.
Posted by Jordan at 8:13 PM
Labels: 1996, box break, Nostalgic Box Break, SP, Upper Deck