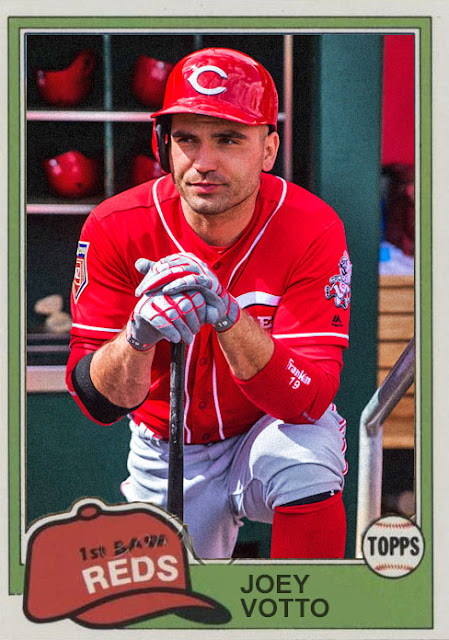 Seven years ago, I went on a road trip for the sole purpose of knocking three ballparks off my list. I went to Washington, Pittsburgh and Cleveland. Had good food, spun good stories, got Ian Desmond's autograph, watched Travis Hafner walk off against the Jays. It was a nice trip.

This summer's the sequel. My dad and I are going to be doing a road trip across the western leg of the east coast, in search of, well, baseball. Some details are still kind of tentative, but the only team I can absolutely confirm that we're gonna see this year is the Cincinnati Reds.

Yes, the Reds have one of the best ballparks out there, Cincinnati is a fun city, and Joey Votto is a few more amazing seasons away from definite enshrinement, but...this Reds team might not be a terribly great team to go see live.

And I'm not saying anything against the lineup. The lineup is wonderful. I think this lineup could actually combine for a ton of power numbers, especially with Jesse Winker in the mix. The only problem is that the Reds, once again, don't seem to have a great deal of pitching. What they had pre-2017 has depleted even more. Who's their ace? Homer Bailey? People like Brandon Finnegan and Luis Castillo could do great things, but this is an untested, injury-prone rotation, something not even closer Raisel Iglesias can save. So they're legitimately gonna need to PRAY this pitching staff can step up, because if not, they're gonna land below the Pirates in the standings, and they don't want that.

Joey Votto, meanwhile, is still one of the best average hitters in the game, and is coming off of a season where, if it hadn't been for someone currently wearing pinstripes, he COULD have won the MVP. It was a very strong possibility. And now he has to go back to this same team and try to lift spirits again. I know it must be tough for him, but this is also someone with legitimate talent who might be a Reds legend in 20 years time. He's capable of great things, and he's already accomplished a ton in his first 10 seasons in the game. A little more strong work from the big guy couldn't hurt.

So yeah...the Reds could be a disaster this year, but at the same time...maybe something big could happen. They might be the sleeper hit of the year.

Coming Tomorrow- An outfielder for another lower-tier team that is banking on another 35+ home run season.
Posted by Jordan at 7:28 PM