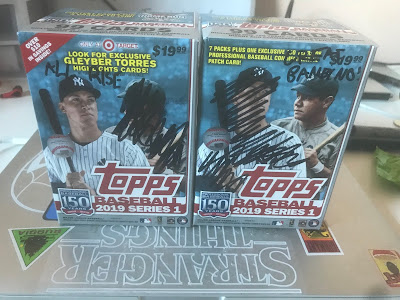 I was worried for a moment, but my local Target did not let me down.

Series 1 has arrived in Southern New Jersey, and I celebrated the occasion by snapping up two blasters of the stuff. And seeing as there's a fairly important sporting event going down this weekend (details to follow), I figured I'd make this break a little...competitive.

I'm going to pit these two blasters against each other. Judge takes the left one, Babe takes the right one. The blaster with the most points wins...nothing. Points will be awarded as such: 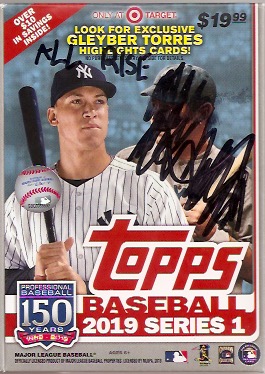 Today, we'll start with the younger of the two (by, like...a hundred years), Aaron Judge, and his blaster. 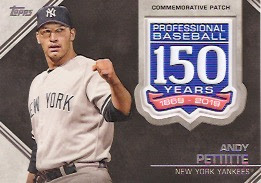 My manupatch was a nice one, even if I don't like these, of Andy Pettitte, who...did admirably on the HOF ballot this year.
Box Total: +6 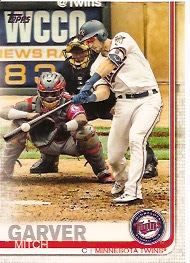 This was my first card of 2019. Not BAD per se, but I could have done better. 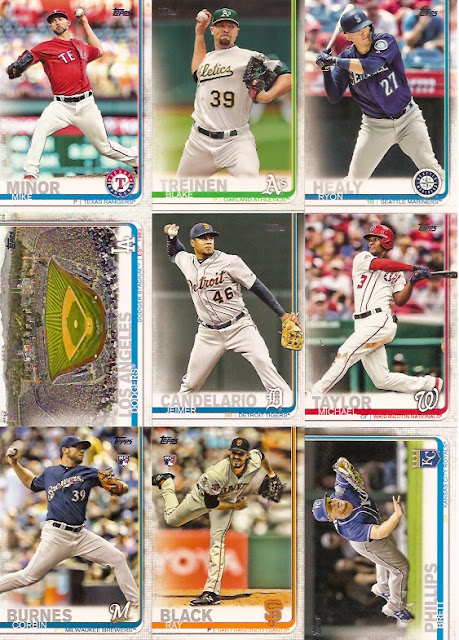 I do really, really like the base design this year, solely because it's not entirely full-bleed, and it's got a border going on, like a cross between 2015 Topps and 1982 Topps.
Players I collect: 2 (Treinen and Candelario)
Great Shots: 1 (Dodger Stadium)
Total: +3
Box Total: +9 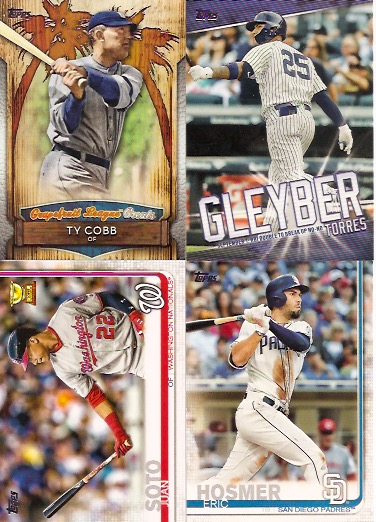 My inserts include a Ty Cobb Grapefruit League Greats, which...I can only take your word for you if you're only showing the player and not the background. Otherwise, it's just your everyday insert set. Still, for HOFer Cobb and insert, +4
And Gleyber Torres gets his own insert set, which always helps. +4
+2 more for collecting Soto and Hosmer
Total: +10
Box Total: +19 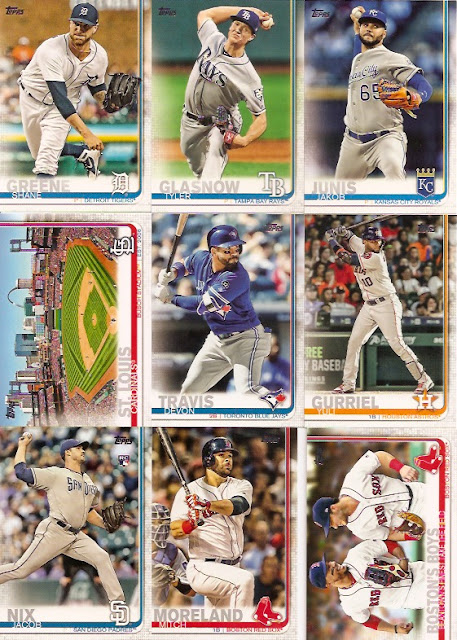 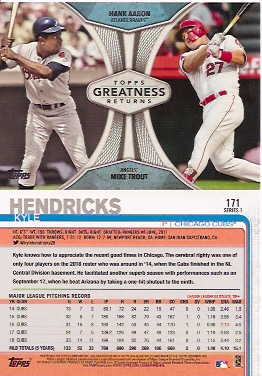 Greatness Returns is...Legendary Lineage Part, like, 7. Good enough subjects, though. +5, as I collect both of these guys, and Aaron is on half of this card (so half of the usual +2)
Plus, a look at the card backs. I really like them. They're clear (even if the scan isn't), they give full career stats, they're colorful, and you can read the card numbers. Plus, I collect Hendricks, so another +1
Box Total: +24

Two guys I collect, plus I guy I collect on a Home Run Challenge insert, which looks slightly better this year. +5 overall.
Box Total: +29 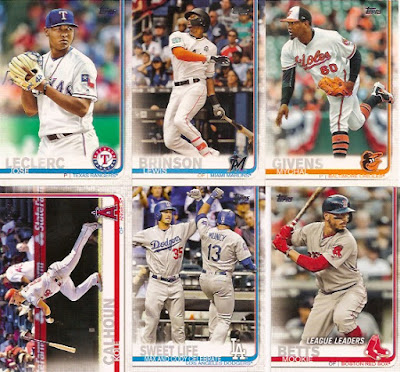 Pack 3-
We're not gonna be breaking even here, because Calhoun's is a great card, but Betts plays for Boston. 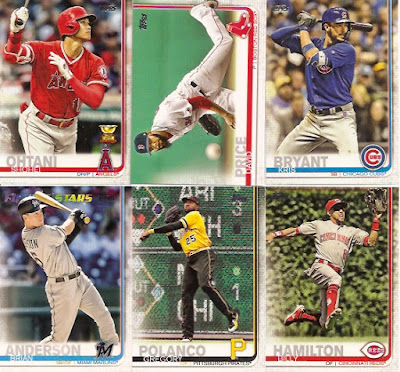 These will be leading to something, though. I collect all but Anderson, so that's +5. Price and Hamilton are Sox and in the wrong uniform respectively, so we're down to +3...except both Polanco and Hamilton have great photos, so we're back up to +5.
Box Total: +34 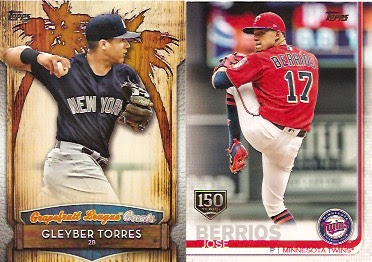 A Yankee insert, this time with an actual spring training uniform, is +4. Plus, Jose Berrios' is a 150 Years of Baseball insert, which is essentially this set's version of 'Minted in Cooperstown'. It's a meaningless parallel. So, the regular +1 for collecting him.
Total: +5
Box Total: +39 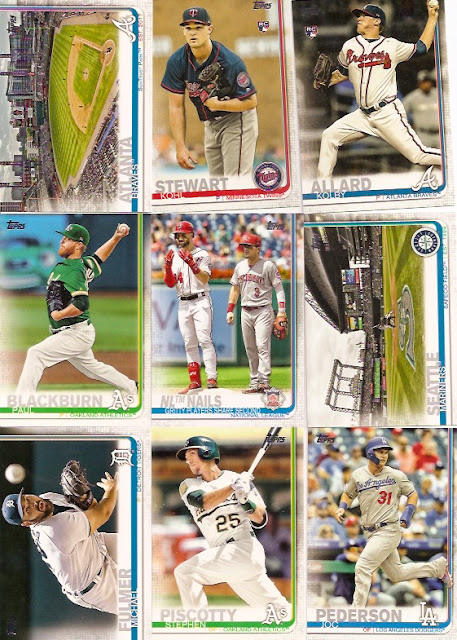 Pack 4-
I do like that we've gone back to Stadium Shots for Team Cards, rather than just out-of-context group shots. They all look pretty nice, too. +2 for both of these.
An additional +1 for collecting Fulmer.
Box Total: +42 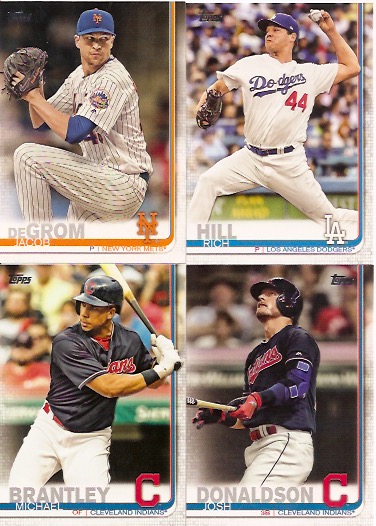 All four of these get a +4, but Brantley and Donaldson are now Astros and Braves, respectively, so we're back to a +2.
Also, I love that this set can occasionally feature shots, like the Brantley, that hedge out from behind the design. Good throwback to 90T
Box Total: +44 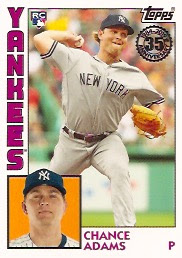 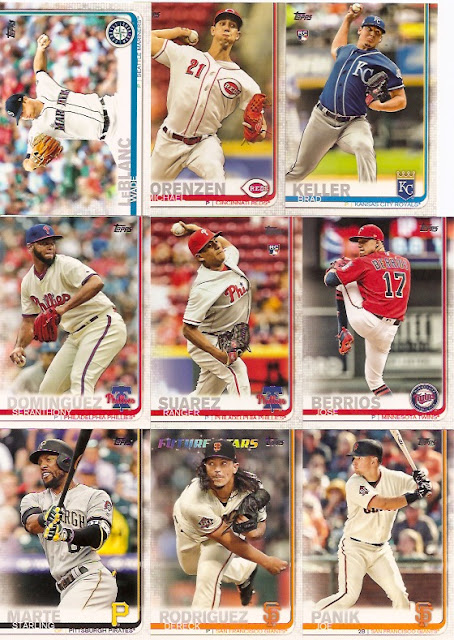 Pack 5-
I also love the throwback, rainbow nature of the Future Stars logo, and how it doesn't greatly impact the photo, tucking it behind Dereck Rodriguez.
+2 for the Phillies, +4 more for Berrios, Marte, Dereck and Panik.
Box Total: +55 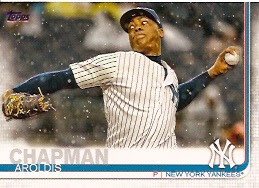 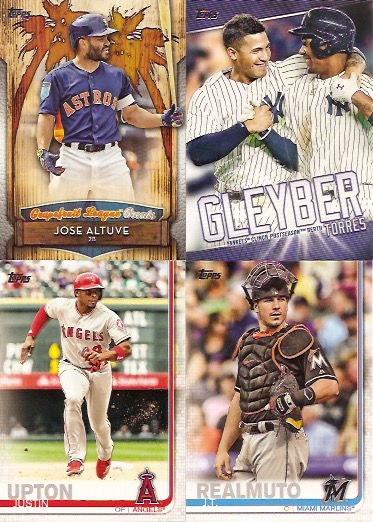 Now, this Altuve Spring Training card is why this insert set needed to exist. That ST uni is nice. +3 altogether there.
Another Gleyber. +4
And +2 more for Upton and Realmuto, who I collect.
Box Total: +67 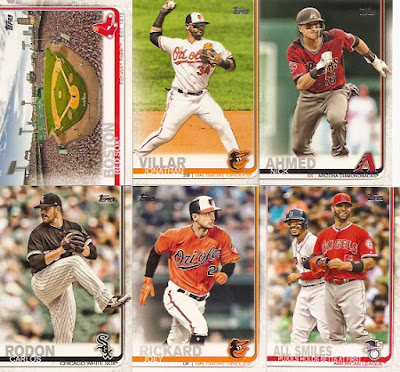 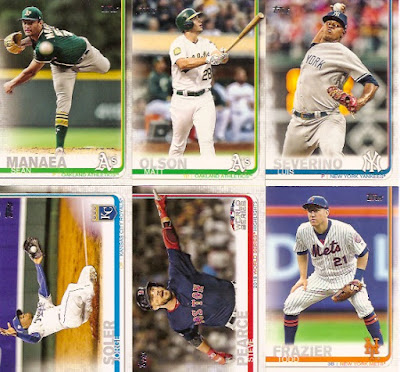 Already we're at +6 because I collect everyone here, but -1 due to Pearce. However, add +2 for Sevvy's pinstripes, and +1 more because I love that Soler photo.
+8
Box Total: +74 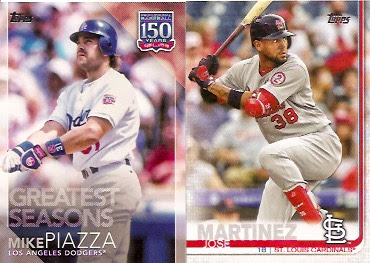 Greatest Seasons is a relatively simple insert set, and Piazza's a nice enough get. +4 overall

...the Martinez looks like a normal base card, and would get a -1 either way...but if you turn it over... 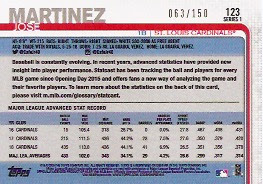 ...this is a Sabermetric/Advanced Stat parallel.

...Back in the day, and by that I mean 2014, those weren't numbered. I pulled a Daisuke Matsuzaka saber metric parallel, and I didn't realize that it was one for another 2 years.

This...because of its pack placement, I knew. And the serial numbering to 150, which is a nice touch. 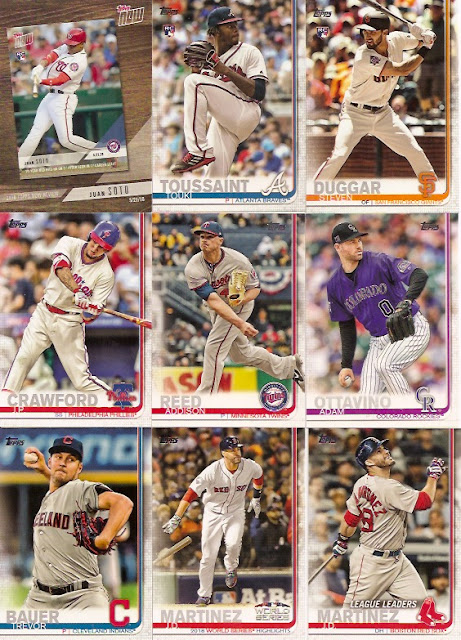 Pack 7-
So, right off the bat we add +5 for all the players I collect, another +1 for Crawford being a Phillie, and a +1 for Ottavino for being a Yankee, but pictured in the wrong uniform.
However...we now must subtract another one for Crawford not being in a Mariners uniform, and -2 more for...BOTH MARTINEZ CARDS.
+4
Box Total: +77

I only collect Abreu, but I love all three of these guys. +4 overall
Box Total: +81 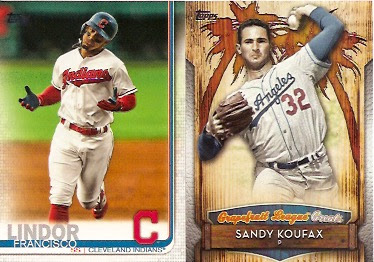 And a solid base card of Francisco Lindor (+2), and a very nice Spring Training shot of Sandy Koufax (+4) to close things out

So, Judge's box has put us off to a nice start. Tomorrow, we'll see what Babe's box has in store. Also, I'm really enjoying this set. I love the base design, the photos have character, and I'm fine with collecting this for the next few months.
Posted by Jordan at 4:12 PM
Labels: 2019, Battle, Blaster, Topps