Topps Cards That Should Have Been: 2005 Juan Gonzalez 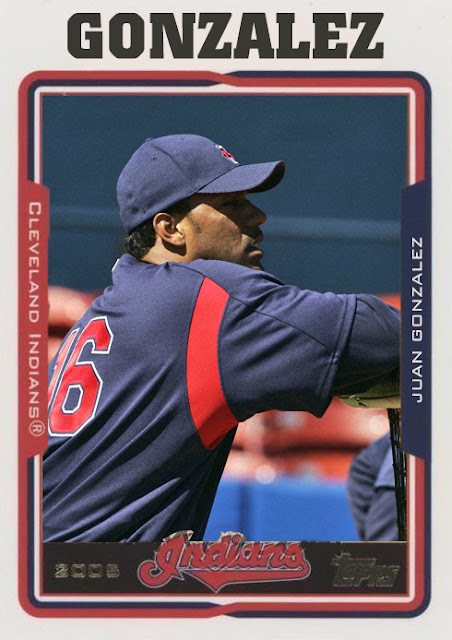 Juan Gonzalez has 2 more MVPs than you. I think he wants you all to know that.

I've spoken briefly about the tumultuous career of Juan Gone on here, mostly in detailing how the hell he ended up at Spring Training camp for the Cardinals in 2008, but not enough has been dedicated to his career post-Rangers. Cause that's all Topps seems to want to document nowadays in their throwback sets.

Okay. So Juan Gonzalez' last season with the Rangers is 1999, and it's another normal season for Juan Gone. .326 average, 39 homers, 128 RBIs, lots of good stuff. This is his age-29 year as well, so the fact that he accomplished both MVPs and the home run titles before the age of 30 is awesome, as most MVPs these days wait til after 30 apparently...

2000, Gonzalez, in the last year of his contract, is traded to Detroit along with Gregg Zaun in exchange for an impressive basket of prospects [Francisco Cordero, Gabe Kapler, Frank Catalanotto] and Justin Thompson. It is an injury shortened year, as Gonzalez only plays in 115 games...while still hitting .289 with 22 homers, because hey, after all, he's still on a lot of steroids at this point. They don't exactly wear off overnight.

And that explains his epic, ASG-qualifying comeback in 2001 for the Cleveland Indians. .325, 35 home runs and 140 RBIs is another classic, career-caliber year for the veteran outfielder, and it would sadly be the last of its kind. On a pair of one-year deals in Texas, Gonzalez' numbers and playing time would decrease substantially, ironically losing playing time to people he was traded for like Catalanotto and Kapler. He'd have 32 homers in those two seasons in Arlington combined. Then, in 33 games with Kansas City in 2004 he'd muster 6 more.

To Topps, this is the end of Juan Gone's story as a player. A 2004 Topps card, and nothing. However, Juan Gonzalez did try one more major league stint before his two year hiatus and attempt in St. Louis, and it was back to the team that had given him comeback numbers before...the Cleveland Indians.

Gonzalez only played one game in Cleveland, and he only had one at bat...and it was not a successful one. But it still the footnote on his powerful career, even if it is a weak one. Juan Gonzalez still played for the Indians in 2005, and it would have been cool to see a Topps card of it, despite the inefficiency of the stint in itself.

Note that Juan Gonzalez did attempt to make camp with the Red Sox in 2006, but...I haven't found any photographic proof to base a card off of. So we end the Juan Gone story here....hopefully.

Posted by Jordan at 8:32 PM
Labels: 2005, Indians, Juan Gonzalez, Topps Cards That Should Have Been