Topps Cards That Should Have Been: 2001 David Cone 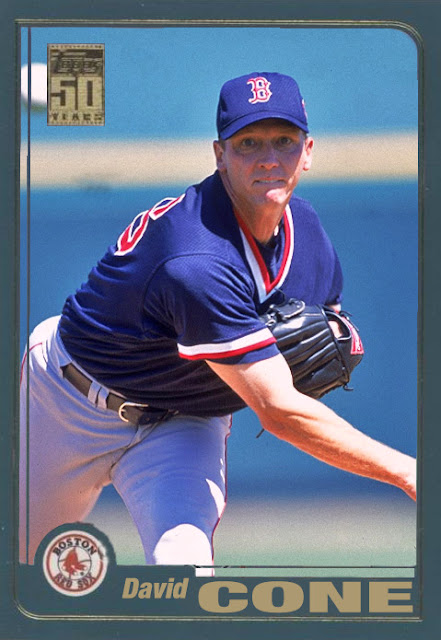 I have some relatives who are Mets fans. I'm not mentioning this so you can pray for them, it's for context.

A few years ago, and this is right before Mariano Rivera gets into the HOF, one in particular is going on a diatribe about how he doesn't think closing pitchers are valid Hall of Famers. I don't know why. He's a lifelong Jets fan as well, clearly something's gone wrong.

But it did get me thinking about David Cone's credentials. From 1988 to 1999, Cone is undeniably one of the best pitchers in baseball. This man has five World Series rings, all in an 8-year period, won 20 games twice, led the league in strikeouts twice, and pitched a perfect game with the Yankees. While any activity outside that 12-year radius is slightly more suspect, Cone in that period is as good as some of the Hall of Famers he pitched against. So...maybe his stats need another look.

Topps was generally alright about his later career issues, and they gave Cone a Topps card in 2002, but...Cone didn't play in 2002. David Cone's 2002 Topps card was a reparation for not having a 2001 Topps card. So I made one.

David Cone signs a cheap one-year deal with Boston in 2001 after a disappointing 6+ ERA season with the Yankees. The Sox have Martinez, Lowe and Wakefield, so Cone will be backing up the platoon. And...he does so, admirably. In 25 games, he has a 4.31 ERA, a 9-7 record and 115 strikeouts. Not bad at all, even if it's his second consecutive year with an ERA higher than 4, both of which were anomalies for him. But he's strong enough, at 38, to get by. Which is nice.

Cone signs a minor league deal with the Mets in 2003, and that's something I couldn't find documentation for in photos, but his late-career stuff, while not indicative of his career-long control, was pretty cool, and it was nice to find something from him in Boston.

So...with Veterans committees cooking up again over the next few years, maybe Cone's name will wind up back in the ring. Maybe he'll get a case enough to get in. I wouldn't be shocked. If Harold Baines can get in, maybe David Cone's time is coming soon.

Posted by Jordan at 7:49 PM
Labels: 2001, Custom Cards, David Cone, Red Sox, Topps Cards That Should Have Been