Topps Cards That Should Have Been: 2009 R.A. Dickey 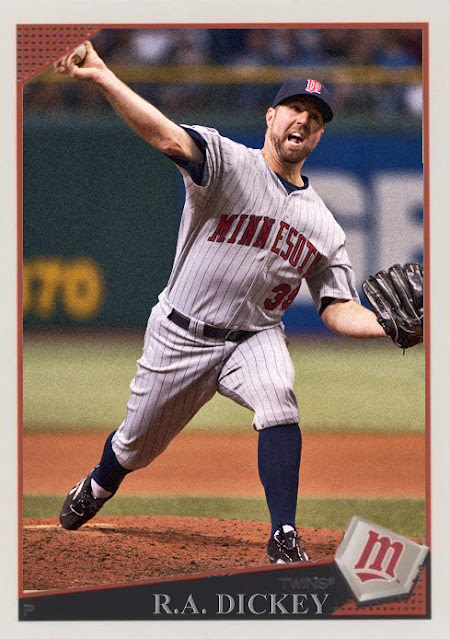 BE A KNUCKLEBALLER! BE SOMEONE THE LEAGUE HAS NO IDEA WHAT TO DO WITH UNTIL YOU'RE 35!

Yeah. R.A. Dickey went through the wringer every year until 2010, until he found his stuff in Queens. You just get years where he's in some random city, like Milwaukee or Seattle, trying his best to stay hot but playing for crappy teams.

2009, on the cusp of his Mets years, we find R.A. Dickey in Minneapolis. He's coming off a high-ERA, multi-purpose year in Seattle, so the Twins decide not to start him, and use him out of the bullpen. Which...is a choice. Considering that this was pre-Cy for Roy, I guess it made sense then, but in hindsight it looks like a waste.

Anyway, Dickey for the Twins went...marginally better than his Seattle run. In 35 games, Dickey held a 4.62 ERA with 42 strikeouts. 13 times he finished games for the Twins, without stepping on Joe Nathan's toes. The upside of this season is that it did give Dickey his highest WAR since his breakout season in 2003. It's not much, but it's a good prelude to his 2010 year, where the good year start coming for the knuckleballer.

Again, if Topps...knew what was coming, they would have kept making Topps cards for Dickey in 2008 and 2009, but they just figured the story was over after 2005, which...again, hindsight is a powerful thing. But it does still give customizers like me chances to make our own versions.

Labels: 2009, Custom Cards, RA Dickey, Topps Cards That Should Have Been, Twins