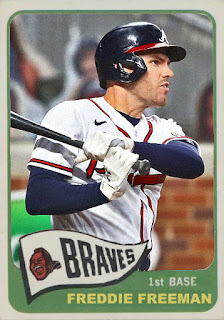 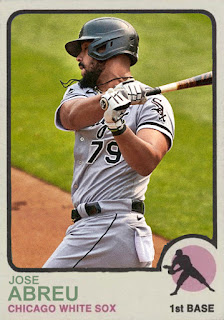 Okay. So I think I can learn to wrap my head around this.

Freddie Freeman and Jose Abreu are among the best 1st baseman playing right now, make a ton of All Star teams, have some excellent career stats, have been at it for about a decade.

Abreu is 33, was about to walk away from the White Sox to possibly derail his career somewhere else but re-upped and had his second consecutive career year, leading the league in RBIs and hits, and sporting a .317 average, his highest since his ROY-winning year in 2014. Despite pressure from Jose Ramirez, I am very alright with Abreu winning MVP, solely because he's still one of the elite hitters in the game, has become a well-rounded hitter when everyone thought he'd become Mo Vaughn, and he's successfully made the jump from the Cuban leagues to the MLB without petering off after a few years. This MVP is the evidence of his career longevity and his evolution into a five-tool player. I'm happy to see it.

As for Freeman...yeah, I wrote a blog post earlier this year about why Freeman didn't deserve the MVP because it took Mookie Betts less time to get hot this year. Mookie Betts arguably petered off in September and wasn't THE hottest in October. Freddie Freeman may have taken til mid-August to get hot, but he could not be cooled down for the remainder of the season. Freeman led the league in runs and doubles this year, had a career-high .341 average, and had 7 RBIs,  2 homers and 12 hits this postseason. So I guess I understand the argument. Also, Freeman had an unstoppable online campaign for MVP that silenced all other competitors, even the equally-worthy Betts.

At the end of the day, in a pandemic-shortened season, the MVPs went not to two fluke stars who'll be gone in a year or so, but to two veterans who've been excellent for long periods of time and have finally been rewarded for their excellence. Freeman is likely on his way to a Hall of Fame induction if he keeps this up. Abreu less so, unless he stays this good for the next 5 years.

Still...looking from a different perspective, these picks really work. They may not entirely sum-up 2020 [after all, Fernando Tatis wasn't even in the Top 3], but they do sum up baseball as it stands right now, which I'll take.