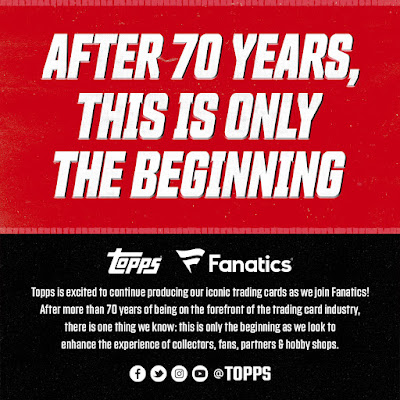 I didn't post about the MLBPA license acquisition by Fanatics last fall because I wasn't quite sure how I felt about it, and therefore what to say about it. Part of it was, for the first time ever as a collector, I wasn't sure what the future held for the hobby.

I started collecting in 2007, as I've discussed, and I knew full well how far the hobby had come. I'd gone through my dad's collection, watching Topps' 70s and 80s run be eventually joined by Fleer, Donruss and Upper Deck, I traced the overproduction boom in the 90s to the premium, multi-tier collecting market in the mid-2000s, and I enjoyed having the selection of Topps and Upper Deck products. Then, in 2010, I saw Topps become the top dog, and promptly go on auto-pilot, once UD would lose their license. Some things in the last decade I didn't see coming, like Panini's more creative ideas without a license, or the total collapse of the retail market in 2020 thanks to stir-crazy prospectors, but I could always point to what I knew, or what was constant.

And as it stood with the license acquisition, after 2022 there wasn't going to be anything constant. Which I had problems with.

I...don't think I've ever talked about this on here, but I've spent most of my life living with autism, and taking in the therapies and behavioral ideas in order to fit in with everyone else. One of the things I've always had troubles with is changes in routine. If something has been one way for as long as I can remember and just suddenly changes without much leeway, I had troubles with that. I point to whenever a website I use often changes its interface, or when a process I've been relying on for some time changes or ends and I have to pick up something new. And I'm working on my response to this, and I always manage, but...it's difficult.

I will say, though, that one of the few times change excites me is when it's tied to collecting. When I get to see cards of people in new uniforms, especially if they're only known to me in one primary uniform, it's insanely cool. Or seeing the first few cards of a new product. That's something I've always enjoyed.

The point is that all my life, I've had Topps releases every year, things to look forward to with that. And with the Fanatics licensing acquisition, I wasn't sure what would be waiting for me on shelves. The silver lining is that Fanatics would improve distribution, as evidenced by their merch sales, but what would Fanatics Baseball be? What would the cards look like? What idea men would be on that? Would it in any way resemble the feeling of opening Topps cards? And I say this as someone who's been very critical of Topps ever since having the universal license. Yes, Topps has made some mistakes, but I'd still be sad if they weren't producing cards.

Which is why yesterday's news, that Fanatics would be buying Topps, its facilities and its employees, as a total absorption of the brand and the company, came as something of a relief.

I mean, yes, any sort of corporate takeover is bad. Corporations becoming too big and too powerful is something that's already spelled doom for the film industry, and I have opinions on the weight of corporations vs. the weight of the average worker that I'm clearly not gonna get into here for fear of alienating even more of the fanbase [hey, remember the guy who called me a shit writer during the month where I was afraid I wouldn't be making any more customs?]. It's kinda similar to the Rob Manfred conundrum, with the big people with money having too much leverage over the players.

But...Topps has enough people on the inside who know what they're doing. Enough products, like Stadium Club, Heritage, Big League and Archives, prove that there's some level of creativity, knowledge of past successes, and design smarts. And hopefully with the collaboration with Fanatics's main idea men, there will be some modicum of collaboration and improving current concepts. Fanatics can use Topps' people to figure out how to make good baseball products, Topps can use Fanatics' people to make better new ideas and to get products in hands faster.

The other bit of this that people have rightfully gotten excited over is the return of the football and basketball licenses to Topps, and the potential return of Topps Football and Topps Basketball. As flawed as both licenses became in Topps' hands, they have the potential to try again in a more lucrative card market. As sad as it was that Topps didn't get to produce rookies of Pat Mahomes, Joe Burrow and Devonta Smith, imagine the big rookies yet to come that Topps will be able to make cards of.

There is obviously the potential for drawbacks. The continued lack of a licensed competitor could make for even more diminishing returns. There could be a lot more of the same behaviors, like the continued stagnation of printing deadlines, pushing back product release dates, and harebrained creative decisions. The only thing this acquisition could change is just who holds the money bag.

And there's always the lingering question of 'what kind of collector will Fanatics be marketing to?' This is still a hobby ruled by eBay flippers and mojo sellers who use cards like cryptocurrency. And while I do think there is merit in selling big money cards [I need to figure out eBay, I have a ton of stuff I could make good money off of], it can't be the whole hobby. Topps, and Fanatics, needs to remember the collectors who are just team collectors, or player collectors, or, if you're me, even more specific types of collecting.

I sincerely hope that this acquisition deal leads to a long and prosperous run, that revitalizes the hobby, levels things back to equilibrium, and makes a majority of collectors happy. I know there's not a high probability of that happening, but it's nice to dream.