Topps Cards That Should Have Been: 2006 Mets 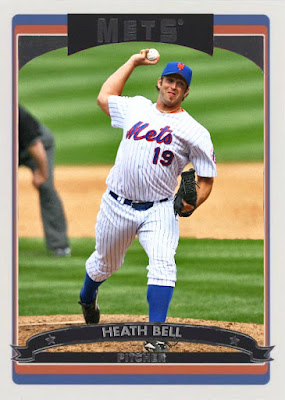 Last year I talked about the strangeness of a lot of the 2007 Mets' roster leftovers. Of course, there were even more of those types if you'd checked a year back for the 2006 stuff. While some of these are sort of sensible, there's still a lot of head-scratching choices, even for a team chasing a division title.

We'll start with a cool, before-he-was-relevant Heath Bell, a few years before he'd become a relief standout for the Padres. Bell pitched in 22 games, had a 5.11 ERA and struck out 35. Already he was showing signs of his future big-game power, but in a much more jammed bullpen. 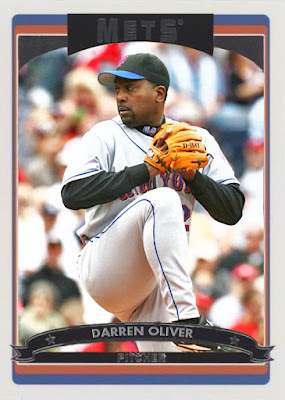 Also hanging out in the Mets bullpen that year, and also not produced by Topps, was Darren Oliver, 35 years old and still approaching peak relevancy with Texas. As for his Mets year, it was pretty alright- a 3.44 ERA and 60 Ks in 80 innings. Oliver was the 2nd-most-productive reliever in the pen, behind Aaron Heilman and was used mainly as a long relief man, as opposed to inning-long setup work. Still, after a season in the minors, Oliver's 2006 would show teams that he still had some stuff left, and he'd be a bullpen mainstay for another 7 years. 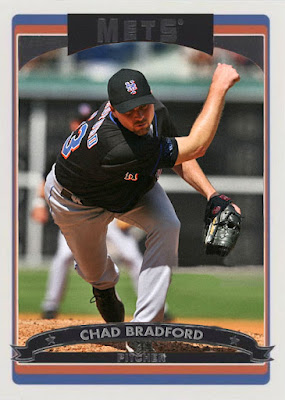 And since we're still on the bullpen, how about 2000s relief icon Chad Bradford? Bradford had a Topps Total card in 2005, and some Upper Deck issues in 2008, but Topps would just stop making cards of Bradford, as it was too tiresome for them to produce cards of a sidearming, beloved relief piece. Anyway, Bradford's sole year in Queens produced his lowest ERA since his come-up in Oakland, with a 2.90 ERA year, plus 45 Ks in 70 games. Bradford joined Pedro Feliciano, Duaner Sanchez and Billy Wagner in providing a killer bullpen front for the Mets that year, before Bradford would be sent to Baltimore. 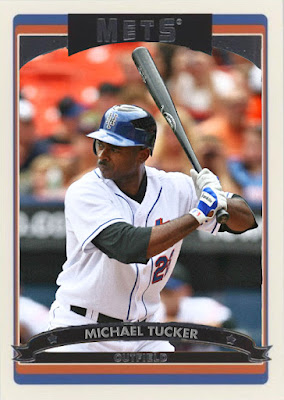 Longtime Braves and Royals outfielder Michael Tucker bopped around for a bit after leaving the Royals for the second time, ending up in places like San Francisco and Philly, before bowing out with the Mets in 06, at 35. In 35 games, he hit .196 with 11 hits and 6 RBIs, alongside average outfield numbers. He was a slightly intriguing backup choice, but didn't do much with the team at all. I will add, though, that Tucker was a postseason bench bat, and provided 2 hits and a steal against the St. Louis Cardinals in the NLCS. Even in his last-ever MLB games, Michael Tucker was a killer contact man. 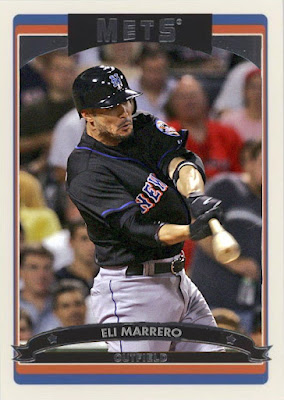 I talked about this a few months ago when I discussed the 2006 Rockies, but 2006 was Eli Marrero's last season as well, and the former Cardinals backup catcher was still trying to make things work as a bench outfield bat. Though his Rockies numbers were okay, he'd still be trade, for Kaz Matsui of all people, and sent to the Mets. If Matsui was speedy, flexible, and defensively impressive, Marrero was...not that. He hit .182 in 25 Mets games, had just 6 hits, and was a modest-to-okay defender. By August he was off the team, and not even the Cardinals would let him keep his career alive. I do find it interesting that two other famous backup catchers, Kelly Stinnett and Mike Difelice, were utilized by the Mets that year. Certainly was the first non-Piazza Mets year since '97, wasn't it? 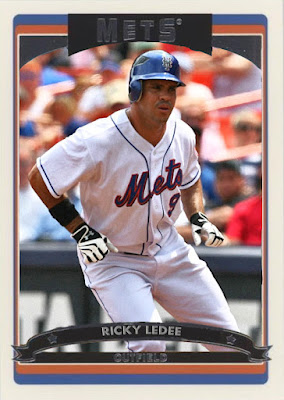 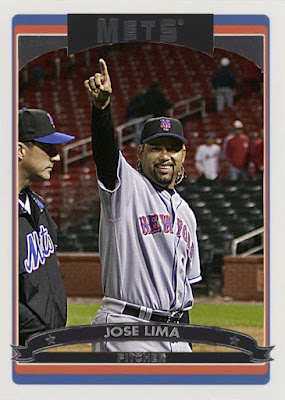 And finally...in 2006, it was Lima time in New York. After going from winning 13 games to losing 16 in the span of a season, Jose Lima was trying to hold onto his chaotic MLB energy, and signed with the Mets to keep starting games. In 4 starts, he had, well, 4 losses, 12 Ks and a 9.87 ERA. Not even his fan-favorite energy could save him there. After leaving the Mets, his desire to keep playing would lead him through the minors, and even to the Korean leagues, before meeting a sad end due to a cardiac arrhythmia.

I'll try to keep throwing up extra customs these days, I've still got a bunch left over.