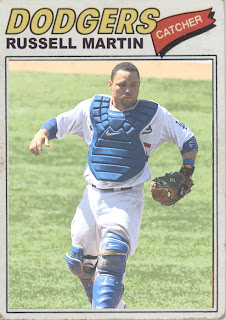 Today the New York Yankees signed Russell Martin to a deal. We don't know the real details, all we know is that Russ Martin is headed to the Bronx. And I know this is very frightening for most people (Okay, maybe just Night Owl), but Brian Cashman thought we needed him. This marks the 3,492nd instance that Brian Cashman has been wrong. I have nothing against Mr. Martin (He was a pretty awesome player before his terrible 2010), but...did we really need him?
Look...we already have Francisco Cervelli, Jesus Montero, Dustin Romine and (this is a frightening propect indeed) Jorge Posada- why would we need Russell Martin? I know he's a great defensive and offensive player- but for God's sake, there's a friggin overflow. Besides Posada, we already have 3 young catchers- and 2 of 'em are probably gonna be traded for pitching (hopefully Romine and Cervelli)
And another thing: why would you sign a guy who played terribly for half of last season and didn't play for the other half? If you're gonna find a catcher for your team, make sure he's trusted to have a better season, or he'll be crap for the rest of his career. Just ask Jason Kendall.
In conclusion, we already have 3 good catchers, one of which was gonna get traded anyway. Why dramatize the situation by adding in another catcher?
Of course, the Yankees also made a questionable move in signing ANOTHER player that hasn't played in a while and the Superstar talks have declined on- Mark Prior. Yes, the Mark Prior who had unbelievable first few seasons...and then was injured for the rest of his friggin career. So Cashman said "You know what...let's sign him to a Minor League deal...see what happens" NOTHING WILL HAPPEN, BRIAN! This guy was injured for half his career, and you think he's gonna be a superstar in the minors? He WAS a superstar in the minors- IN 2001! Geez, Brian, get a grip. Waddaya gonna do next, sign Rick Ankiel as a pitcher?
(I think he just got an idea!)
On an unrelated but still awesome note, Hideki Matsui signed with Athletics today. Good for him. Sure, they'll end up in last, but it's a fun team. Plus, part of me has always wanted to see Matsui in green.
Posted by Jordan at 5:59 PM