Giving up the crown 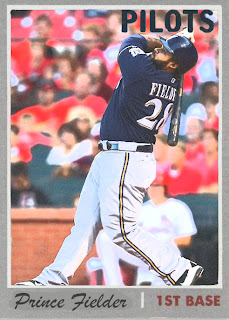 (I was going to title this "Clown Price of Crime", but I didn't want any Detroit residents to come and kill me.)
So there we go. After a strange and eventful offseason, one of the big guns finally signs a contract, signalling the turning point in the herald of cannonballs. And while everyone thought this bomb would go in one direction, it ended up sailing into Detroit.
The Tigers do not need a first baseman. What they need is a hitter. After Victor Martinez left in a stretcher, they needed to fill a hole. Unfortunately, in filling one hole, they left several others open. For instance, the Tigers already have a first baseman. Miguel, Prince. Prince, Miguel. Perhaps you've heard of him. He's been an excellent player for Detroit ever since he was snatched from Florida.
However, the Tigers saw that there was a star free, and snatched him. Why? Why not?
Fielder is going to end up booting a fine star from his position. Either he will play first and Cabrera will play third, or he will play third. Either way, this does not bode well for the Tigers' current third baseman, who happens to be a long tenured Tiger.
His name is Inge. And he is probably quite pissed off right now.
Which is why I am so dismayed by this deal. The Tigers DO NOT NEED Prince Fielder. Yet the moment they saw no one else had him, they snatched him up in seconds. This infuriates me. Not that any team I give a damn about would want him. And instead of letting someone who actually needed a good first baseman get him, the Tigers swoop in. Now, what do they do if they trade Brandon Inge, and Cabrera gets hurt. Whose fault will that be?
Again, I could be wrong. Prince could be a hit, or he could be Mo Vaughn 2.0. You really never know.
Posted by Jordan at 6:01 PM
Labels: Prince Fielder, Stupid decisions, Tigers