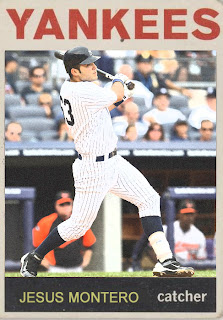 I first heard of the monumental, catastrophic trade on Facebook. My two Yankee fans who I am friends with were saying something about Michael Pineda.

Hang on...what? Michael Pineda, a Yankee? THAT'S AWESOME! The man came close to a Rookie of the Year season last year, and the Yankees need pitching.

So I check ESPN to see who they traded him for. And I wasn't happy.

You see the Mariners gave up their future for us. Unfortunately, we had to give up ours. Jesus Montero is now a Seattle Mariner.

(It should be mentioned that Hector Noesi was also involved in the trade, but nobody cares about him.)

You see, I was looking forward to Jesus Montero sporting pinstripes on a daily basis after the impending departure of Russell Martin. I saw him as our catcher, the same way I saw Austin Jackson as our centerfielder and Ian Kennedy as our fifth starter. But nothing ever goes the way it planned. So right now, we have Russell Martin, we have Austin Romine, and that's about it.

There's also a really big upside. Because Seattle gave up their future too.

Michael Pineda, if it weren't for King Felix, would have been the best Mariner on the team last year. He had a tremendous, ROY worthy season, even to the point of voting him in 30Year's contest as the most worthy contender.

Fortunately, we needed pitching. After CC, we have two pitchers that are semi reliable, two pitchers that were reliable last year (one of which we resigned), and the Killer B's waiting in the wings. Now, we have insurance so that when Hughes and Burnett are not their best, there will be someone in the rotation after CC, and before Garcia, Betances and the rest.

In summary, Jesus Montero was meant to be the Yankee catcher. Now, he will reside as the Seattle catcher, and whenever he has a great game, instead of my dad reporting the news it will be my Mariner loving uncle. On the upside, we have Michael Pineda. And that's pretty good.

Of course, this trade may not work. It could be a steal for Seattle. I could be writing ten years from now, and saying "remember when I said trading Pineda for Jesus would be a good idea? Disavow that."

But you never know. It is baseball.
Posted by Jordan at 11:16 PM