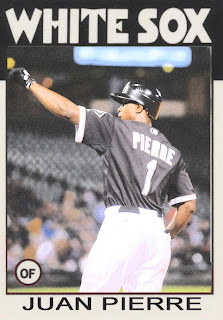 Back when Juan Pierre was on the Marlins, three teams ago, the man was incredibly speedy and would always get on base and bite the Phillies in the ass. Hell, the 2003 series was painful to watch, knowing that Pierre, one of the guys that base-stole Philly into submission, was walking off with the ring.

(Of course, the 2003 series was also painful because THE YANKEES BLEW IT, but that's another story for another rant.)

So after Pierre humiliates us numerous times as a Marlin from 2003-2005, he leaves the NL East. Thankfully that is. He settles on teams that are good, but can't be taken seriously, and after a while I actually begin to respect him as a player. This is mainly because I knew full well that he was the best base-stealer in baseball (check the wall at Cooperstown, it says so.) Last season the man recieved his 2000th hit. I really don't think he'll hit 3000, or even grace a wall in Cooperstown (one in the main hall), but you can agree that when he's not tormenting Philadelphia, he's fun to watch.

Today, Juan Pierre signed with the Phillies, on a minor league deal that could lead to a potential outfielder spot if one of the three get hurt (and if Raul Ibanez does the right thing and retires). This means that as awesome as a Mayberry/Victorino/Pence outfield is, now there's an extra hand to fill the board whenever one of the gets hurt. And that's great. One thing this Philly team needs is speed and hits, and Pierre can supply both of those. Mainly speed.

However, the one thing that fatigues me is that while I said Pierre was an extra hand, I didn't mention how many other extra hands there are in the Philly outfield. Because waiting in the wings with Juan are two older, slower hands that could be pissed of if they don't get their time. Their names are Laynce Nix and Scott Posednik.

I know what your thinking: Yes, Scott Posednik is not only still alive, but he's still playing.

Nix and Posednik can hit, and that's why they were signed in the first place. However, Posednik, approaching his tenth Major League season, is getting quite old, and is becoming a journeyman outfielder whose sole purpose is to at least get some playing time. Nix has a similar deal. Imagine Nix and Posednik are like the two old financers in the movie Trading Places. Their motive is for our heroes to fail. And if they win, then the people in the crowd will boo.

In summary, I personally think Juan Pierre would be a decent fit for the Philly outfield. True, he is 34. But he can still hit, can still field, and can still steal bases.

Scott Posednik and Laynce Nix can only do one of those three things.

Who would you rather sign?
Posted by Jordan at 9:32 PM