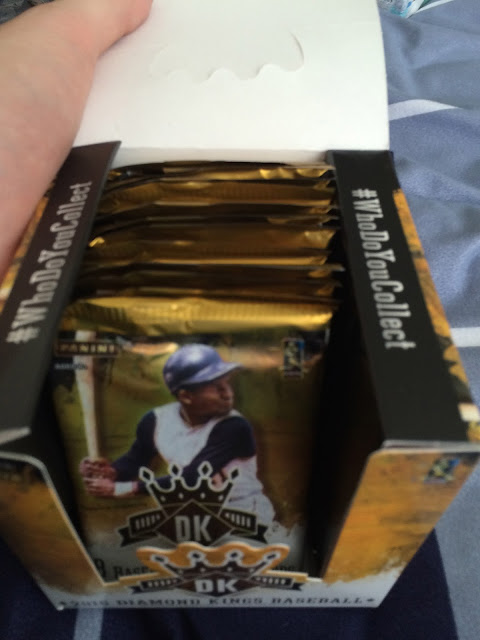 I posted the first half of this box break the other day, and so far, despite the fact that I'm not 100% in love with the new version of Diamond Kings, it's been a nice break. The inserts are kinda cool, the base design isn't the worst, and I also got a pretty great hit in a Gil Hodges jersey/bat card (the jersey swatch is slightly suspect, but I'm being optimistic.)

So, now for the rest of the box. I'm on the lookout for one more hit. I didn't really get this box for the MOJO HITZ per se, but they're a nice touch. Last box of DK I broke, I pulled a Starling Marte relic, which was a lot cooler before the PED outing. 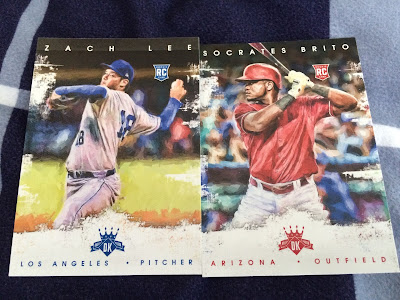 Pack 7- Two guys that haven't really done a ton in the NL West. 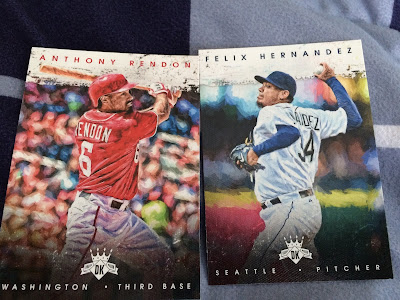 Better. Guy on the left is doing a ton better than the guy on the right so far this year. 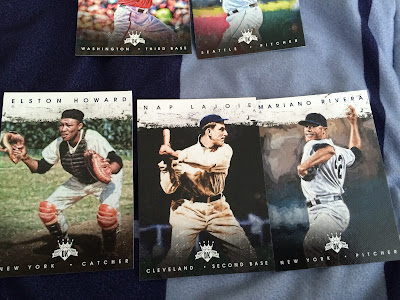 LEGENDS.
1. You never see any Ellie Howard cards, and that's a damned shame. Ellie was an All-Star catcher and MVP, as well as being the first black New York Yankee, and one of the greatest non-HOF Yankee legends.
2. No Nap Lajoie in many products either, and since he was so legendary that a team was basically named after him, it's kinda deserving. True, he was a horse's ass, but back in that era of baseball it was alright to be a dick in baseball.
3. Mariano Rivera. I'm lucky to have seen him work the ninth, man. 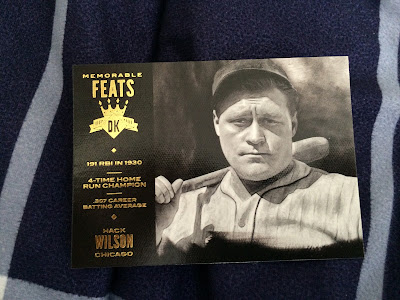 Finally, ANOTHER GUY you don't see in products a lot, and that's Cubs slugger Hack Wilson. Legendary hitter, even if his career was short for the time period. Glad to see an Honorable Feats insert dedicated to him. 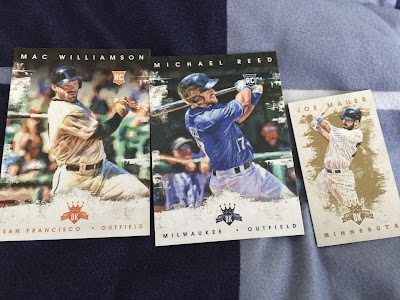 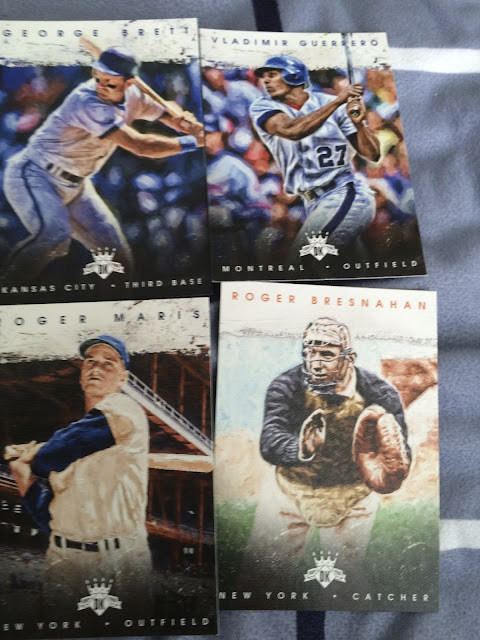 Retire Legends- Half are in the Hall of Fame, and that's Brett and Bresnahan (another guy I'm happy to nab a card of). Vlad will be a Hall of Famer very soon. Maris...if the Veterans Committee is kind, will probably be there someday. 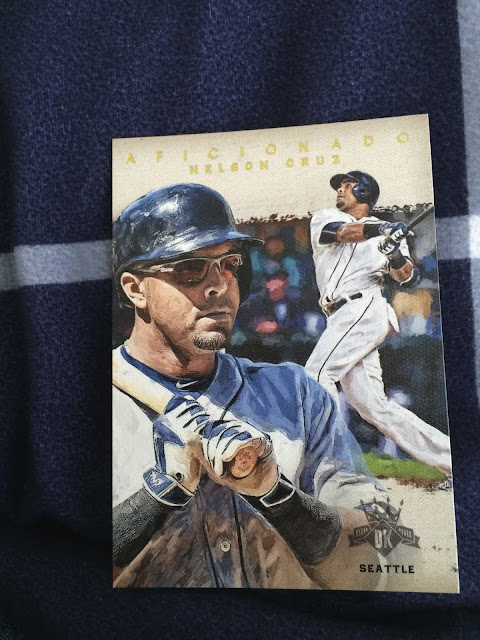 Our Aficionado insert is of Nelson Cruz, whose spree of home runs has stopped short, suddenly, as he's having some trouble at the bat so far this season. Still, great to nab a card of him. 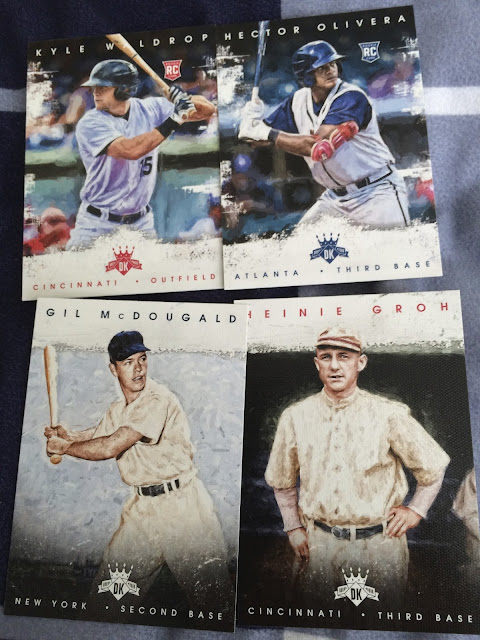 Pack 9-
Two kinda weak rookies, and two kinda-weak legends. Groh I only know from a Dan Gutman book. Gil McDougald was the Yankee 2nd Baseman in the 1950's. 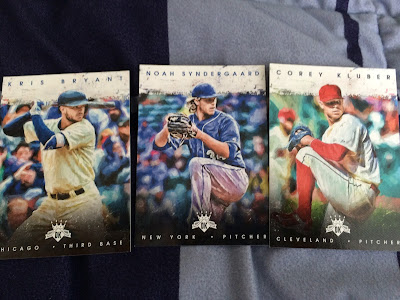 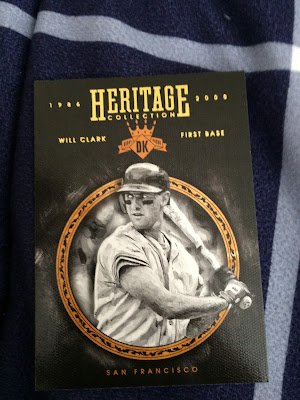 My Heritage insert for this pack is of a guy I don't collect, Will Clark. Lovely. 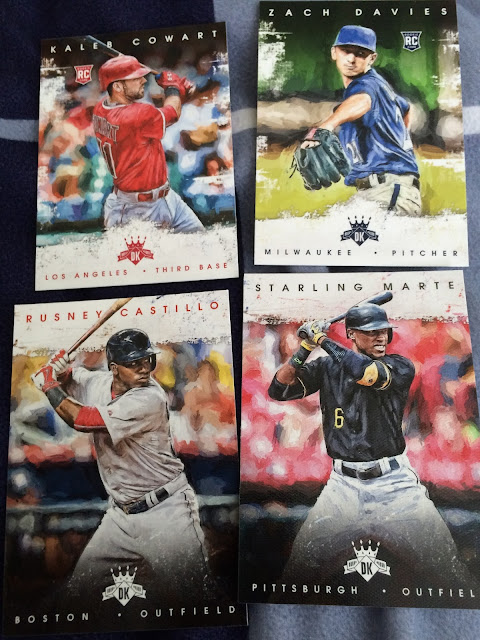 Pack 10-
One interesting rookie there in Davies. Two kinda failed rookies. And a guy who took steroids. 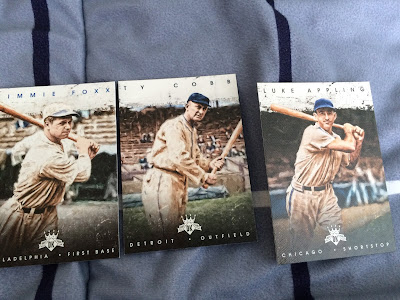 There are your regulars for HOF legends- Foxx and Cobb at least have new photos, and Appling is a welcome addition. 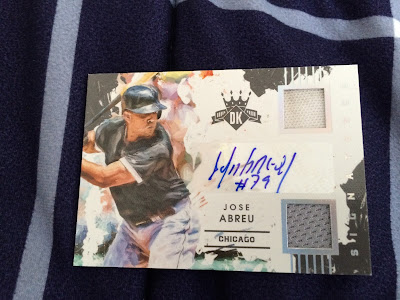 Here's my second hit, and I can't say I'm disappointed- despite recent slumpage, Jose Abreu is still the defacto leader in Chicago, and still a pretty great overall hitter, a few years after his insane Rookie Year. Yeah, it's a sticker auto, but those swatches are less suspect than Hodges'. I'm pretty happy with the hits, as they're two players I'd heard of, and were legitimately good at the game, other than some rookie that wasn't gonna pan out. 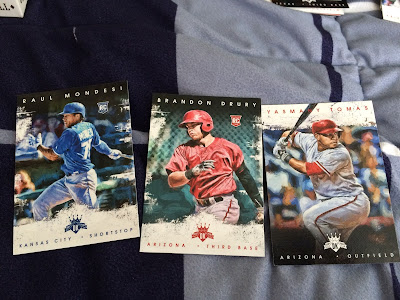 Pack 11-
Mondesi's having a tough sophomore season, while Drury and Tomas are doing pretty well this season. 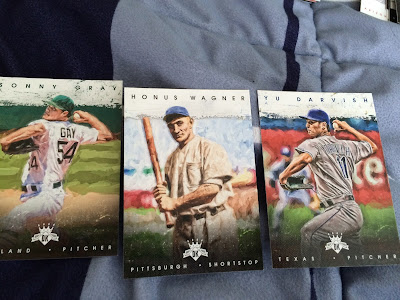 Honus Wagner is so awesome that he has an entourage of two oft-injured AL West pitchers. I feel like the way the uniform bended is a bit unfortunate for the lettering on Gray's card. 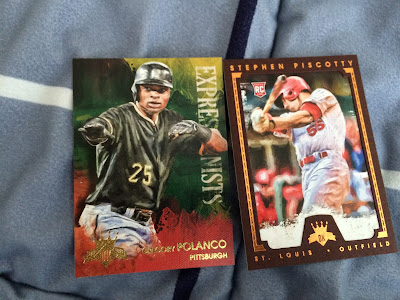 Gregory Polanco is my Expressionists insert...I foolishly picked up that card at a card show last year. Also, the Piscotty is a non-numbered brown bordered parallel. 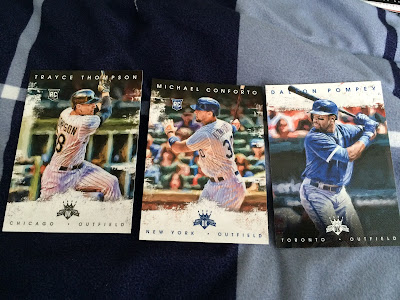 Pack 12- Three rookies that haven't done as well as people would have thought, though Michael Conforto is having a promising start. 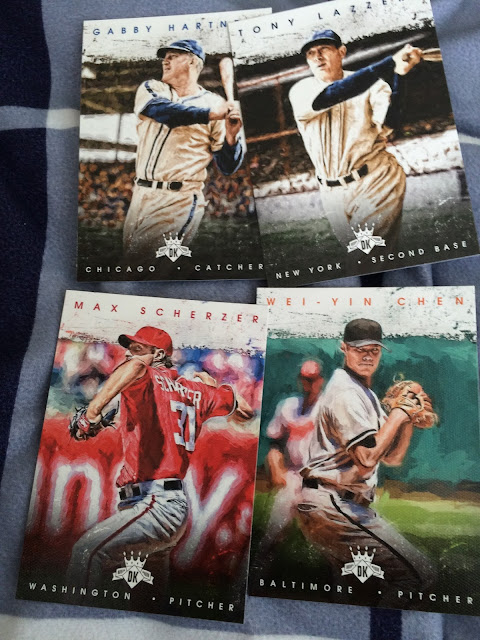 Two HOF stars including Gabby Hartnett, another guy you rarely see in these types of products, and Tony Lazzeri, the most underrated member of Murderer's Row. Here, we also have Max Scherzer, two-time Cy Young winner, and Wei-Yin Chen, incorrectly painted in an O's uniform (he'd already been signed as a Marlin by that point). 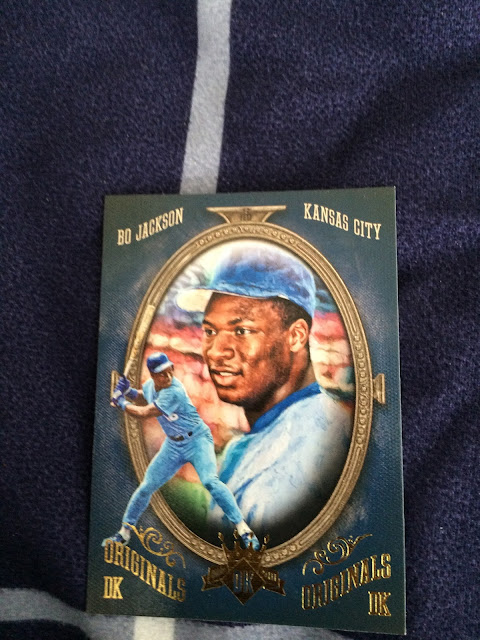 My last insert is a DK Originals of Bo Jackson, which I can't NOT be pleased with- it's Bo Jackson, one of the better true athletes to play the game, and a guy that would have been a Hall of Famer had it not been for an unfortunate football injury. Can't help but respect the guy.

That was 2016 Diamond Kings. It's an imperfect set, but damn if I didn't enjoy this break. The base set, inserts and hits had enough charming things about them that I couldn't help but leave the break happy.

Also, in the next few days I'm gonna post a rip of, well, the opposite. It's a nice enough set, that yields some pretty nice stuff, but...I did not enjoy ripping this particular box. You'll see why when I post it.
Posted by Jordan at 3:42 PM