The Stars are Out: Postseason Edition 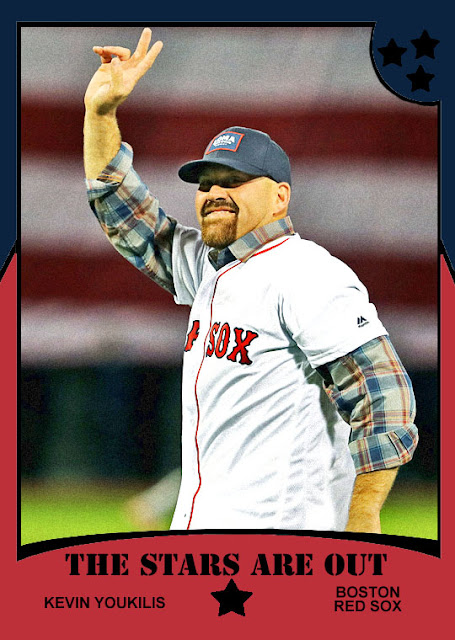 These aren't the last Stars Are Out customs of the year...as there are a few stragglers that are going to hit soon, but all of these occurred during the postseason, which means like 90% of these are gonna be MLB personnel. Which isn't bad. Just...don't expect a renegade rock singer or rodeo rider or anything.

I'm starting with Youk so I can get him over with first. Kevin Youkilis is obviously beloved in Boston for tormenting the Yankees for like 8 years or so, and hitting home runs like hell. So he was a natural choice for a first pitch, though...a bit less natural than the other 2 Red Sox first pitches coming later.

Onto teams taken out in Championship Series': 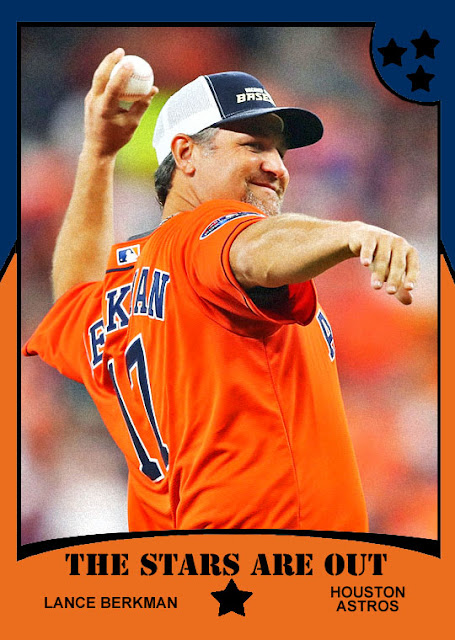 The Astros had a few, mostly commemorating their 2005 WS gig, instead of past teams (though Mike Scott appeared, even if I didn't customize him). Lance Berkman is, of course, a hero over there, even after he went and joined not only the Yankees, but the state rival Rangers. His mid-2000s years are still remembered fondly there, even if he looks odd in the new orange. 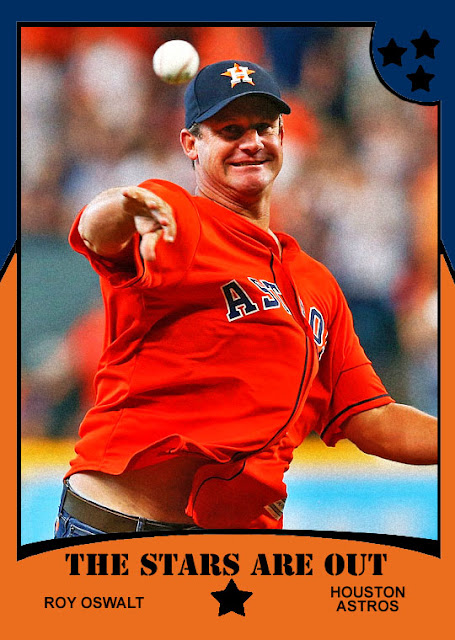 As does Roy Oswalt. Another guy who's a legend there thanks to his sharp work in the 2000s, Oswalt was a perennial Cy Young finalist, a strikeout artist, and an NL Central horror figure. Even though his career was a bit less graceful than Berkman's, he still gets to come back and throw out a first pitch, which is nice.

Meanwhile, in the losing NLCS city: 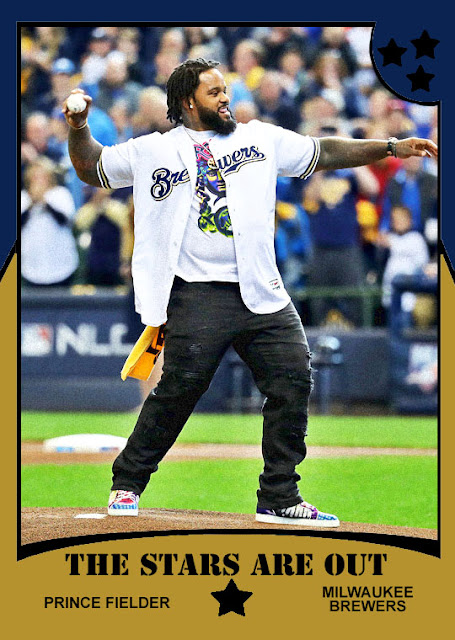 A few legends showed up in Milwaukee. One was Prince Fielder, because...of course he's a legend there by now. He and Ryan Braun even hugged it out. Prince, in a t-shirt and everything, came off like the Jack Black of baseball, and I mean that as a compliment. Plus, he's still young enough to have some velocity in that pitch, I imagine. 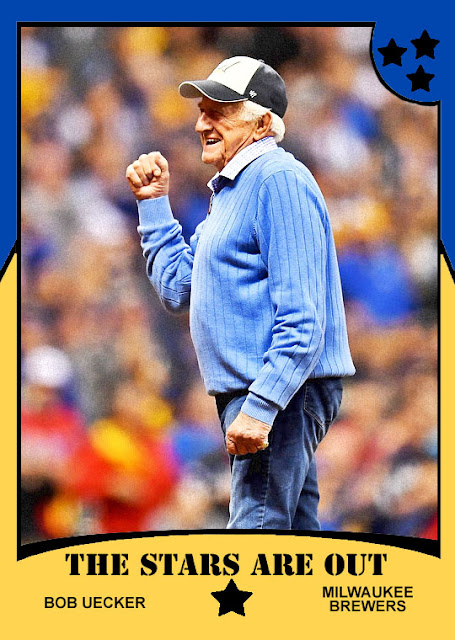 Bob Uecker needs no introduction in Milwaukee. He is their beloved voice, and the face, and vocal chords, of Milwaukee sports for several decades. The standing O must have lasted hours. Good for him. 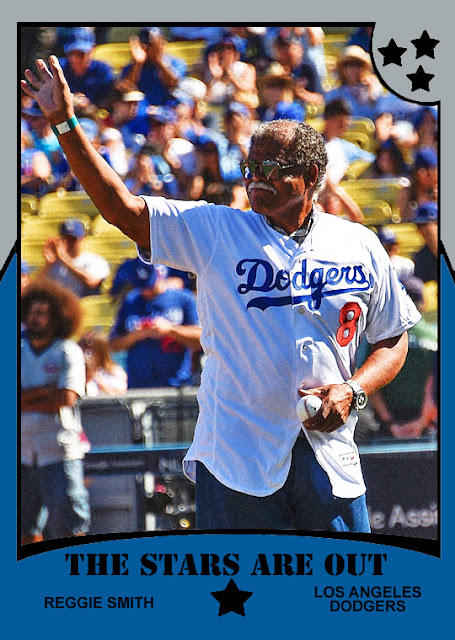 Next, some World Series players. Reggie Smith, having been a part of a World Series team in 1981, was a nice stroke of good luck for the Dodgers, as well as a treat for older fans. 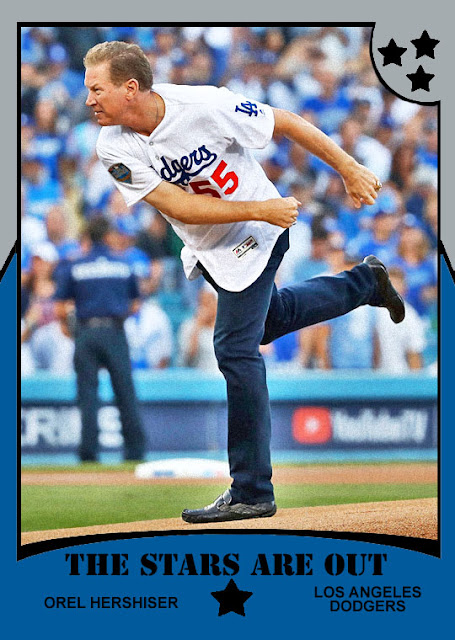 And then there's Orel, who's a treat for just about everybody. A guy who won a Cy Young, an MVP of a World Series, an ALCS and an NLCS, and tons of respect from Dodgers fans, Orel was one of the catalysts behind the 1988 team, and a strikeout killer. Also, fun fact, Orel went to my high school. And so I collect him. It's that simple. 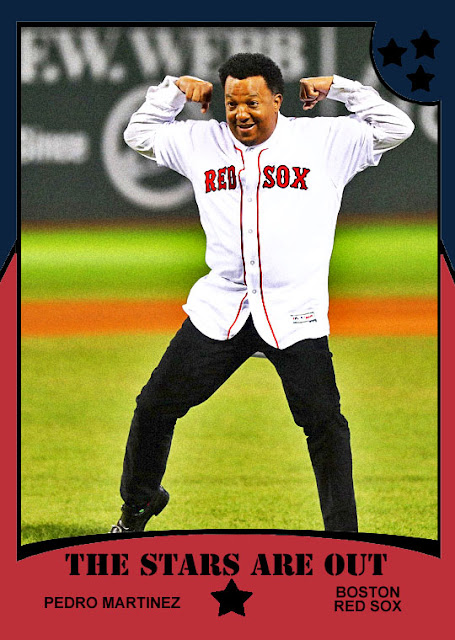 And yes, the team that won the damned thing gets some as well. Especially Pedro. The last time he was anywhere near a World Series, he was saying the Yankees were his daddy, so this was kinda nice. Of course, Pedro's a legend anywhere he pitched, but especially Boston, where his Cy Youngs, strikeouts, and ferocity were beloved. Yeah, he also made serious playoff runs with the Mets, Expos and Phils, but he doesn't get a welcome there like he does at Fenway. 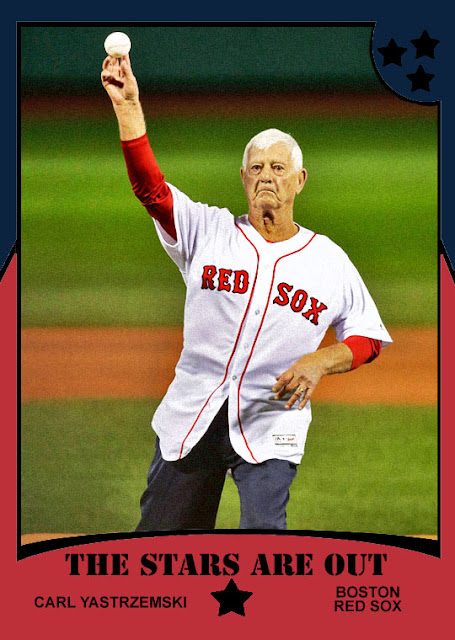 ...Still, I've gotta end on Yaz. Carl Yastrzemski is Boston baseball, and was more than just Ted Williams' replacement. He was legendary, and he was an extraordinary hitter. And I can only imagine the respectful applause he got when he threw out a first pitch that night, in the World Series. He deserved it, too.