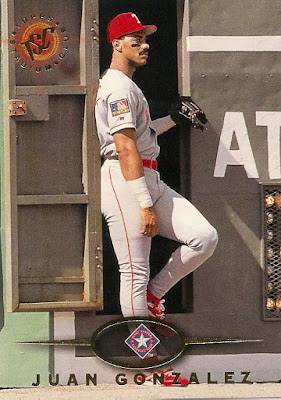 It was something out of fantasy.

Something out of a science fiction dream of yore.

Something that I'd heard legends of but never witnessed myself.

And yet...there they were...sitting next to the stacks of sleeved dime box cards I'd just skimmed.

Now, to fully explain what made these specific nickel bins so great.

Which is why I am happy to report that these nickel bins were made up of several sets that you rarely find in DIME bins. A guy next to me was thumbing through a glut of 1978 Topps commons. You don't usually get those for a dime. A lot of these boxes had a ton of products from the mid-2000s, which is a RARE feat for any card show vendor. I feel like the guy must have broken some 2005-era product before the show.

And there was also some well-curated 90s stuff, like this 1995 Stadium Club Juan-Gone, which goes right into my 95SC set. 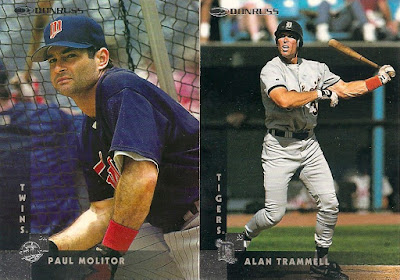 90s stuff is usually a fair sight in dime or nickel boxes, but 1997 Donruss is a rarity. Both these vets look great here, and this was one of Trammell's final releases. 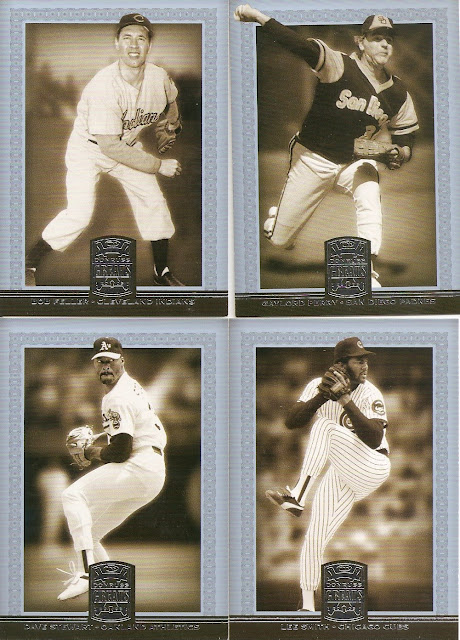 Here's one I hadn't encountered at all- 2005 Donruss Greats, a very cleanly-designed set that honestly could have improved with subsequent releases. The greats weren't limited to HOFers like Perry and Feller, but soon-to-be HOFers like Smith and...greats like Dave Stewart.

2005 Diamond Kings I've seen hundreds of times, and yet these three were new to me.

2001 Fleer Ultra I'd seen, but didn't have a ton of. The photography in this set is pretty awesome, and very well-zoomed. Berkman's is probably my favorite here.

And it works in the horizontals, too. I have no idea how I hadn't seen that Pedro. 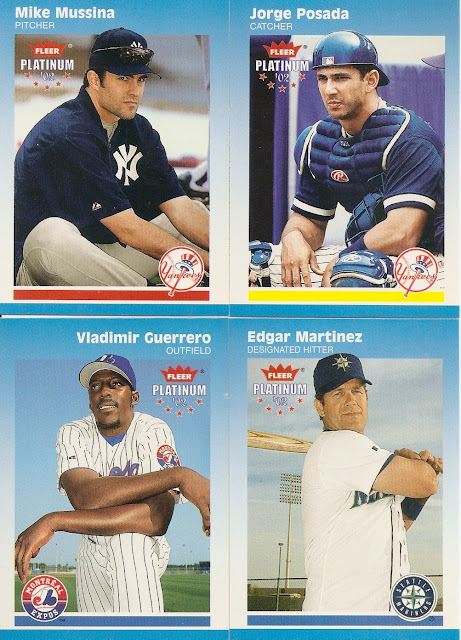 2002 Fleer Platinum, aka the 87 Fleer Heritage set. Not a bad likeness, and some pretty wise choices for photography. Glad I picked some up. 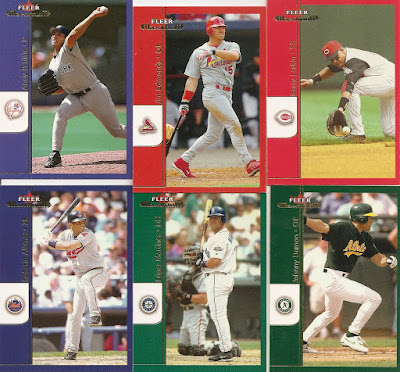 Another unusual Fleer set I found in here was 2002 Fleer Maximum, which I hadn't really heard of, though the simple, color-coordinated base set rang a bell. 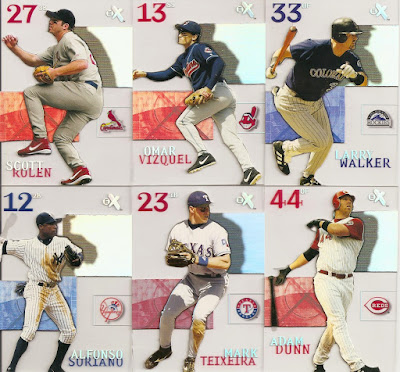 I'd actually found some 2003 Fleer e-X at a previous show, but I hadn't picked up these yet. An early Tex always works for me. And plus, this design is pretty damn cool. 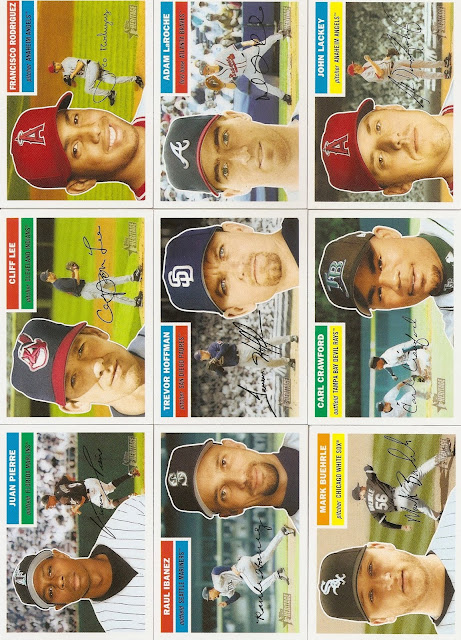 After a while, it started to get ridiculous. There was a ton of 2005 Topps Heritage in there. You're lucky if you find this set every once in a few years, and it's always evaded me, as it was the last Heritage set before A.) I started collecting, and B.) Heritage became, more or less, the set it is now.  So nabbing all of these was therapeutic. Hell, a Juan Pierre card found its way into my card show posts after all. 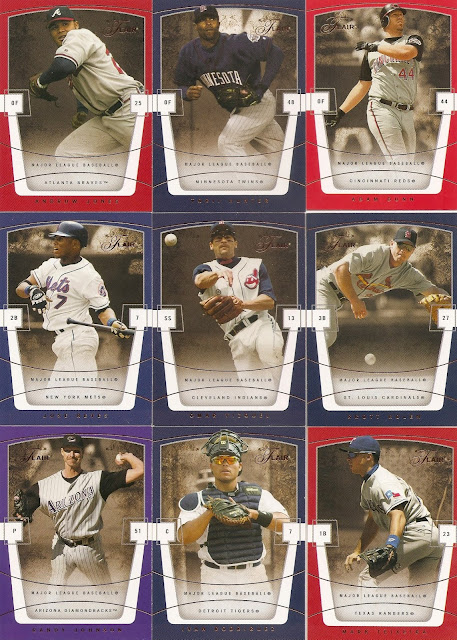 Of course, here's where I began to double-take. 2004 Flair is a set that's very close to my heart, as it was tied together with some other 2004 Fleer sets to cement my beginnings of the hobby. So to get so many I'd yet to have (although the Rolen and Hunter I may have already) was pretty satisfying. 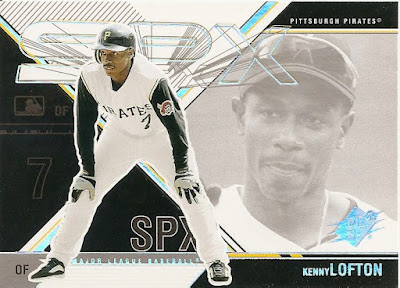 This was the one that deserved a double-take though.

I'd been looking for this card for a while. Solely because it's one of the few depictions we have of Kenny Lofton's very brief stint in Pittsburgh. How it ended up on an SPx card i have no idea, but it ended up in that nickel box. 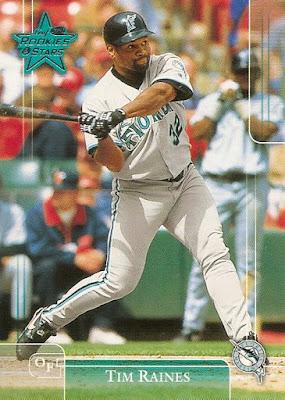 This is ANOTHER card I've been looking for since I learned of its existence. Because...COME ON. Tim Raines on a team that didn't even exist when he came into the league? I gotta have that. He actually looks pretty strong on this one, too. For one of the man's final releases, I'm glad it does him justice.

But to talk about this vendor for a moment- good conversationalist. I don't talk much when I browse dime boxes. I'll say the occasional 'nice selection', or whatever, but I'm a very awkward person, and I usually focus. But this guy engaged in conversation with me a few times, and he was incredibly nice, and good to talk to. You don't get personalities behind card show tables. At least not good ones.

This guy had a few different themes to his dime boxes. One was all Philadelphia Phillies, and while I browsed there a bit, you find that in Philadelphia, there's gonna be more people in front of you that pick the starrier players. Lots of Desi Relafords, Mike Lieberthals, Brandon Duckworths. So I could only snag a few 2005 Total base cards, which are all welcome, but...I wasn't gonna do the Phillies boxes for long.

But the main boxes of his were marked 'Hall of Famers & Stars, 10 cents each'. So...away I went. Least it ruled out commons.

A lot of the same demographic as the last guy, too. mid-2000s stuff, which is welcome, with some late 90s as well. I hadn't seen much of 2005 Flair, so getting a new Thome from there was a good sign. 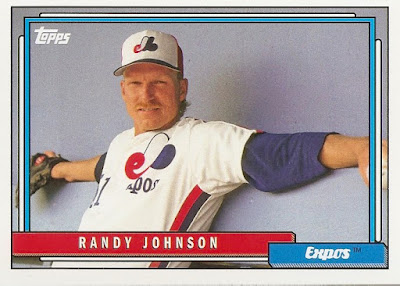 This...is a beautiful card. It's from 2017 Archives. I didn't know if I needed it for my set or not, so I got two. One for the collection as well. Because DAMN. 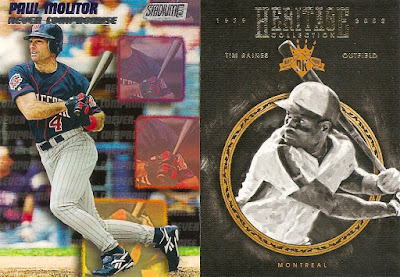 The inserts ranged from 90s, like this Molitor Never Compromise, to modern, like this Tim Raines insert from recent Diamond Kings 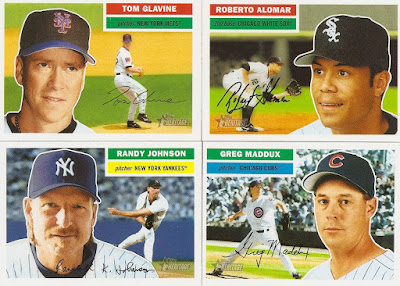 Heck, this guy even had some more 2005 Heritage. WHY DID EVERYBODY HAVE 2005 HERITAGE RANDOMLY AT THIS SHOW? IT'S GREAT, BUT ALSO ALARMING CONSIDERING NOBODY'D HAD ANY PRIOR TO THIS. 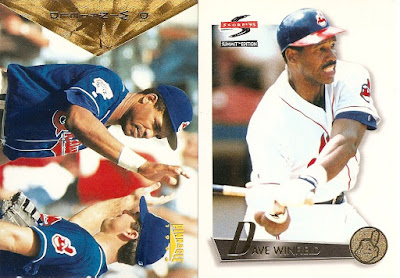 I also stocked up on rare sights in terms of retired players, like shots of Dave Winfield's last season in Cleveland. 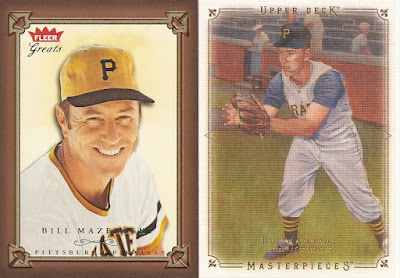 I noticed by the range of the dealer's bobbleheads (lots of Pittsburgh, Milwaukee, Cleveland) that he was probably based in the mid-north, which is refreshing amidst the sea of Philly dealers. Meant I could find a ton of Mazeroski cards in there, which is always nice. 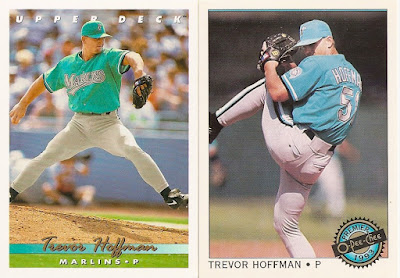 Trevor Hoffman on the Marlins is such a rare sight that I couldn't help myself here. 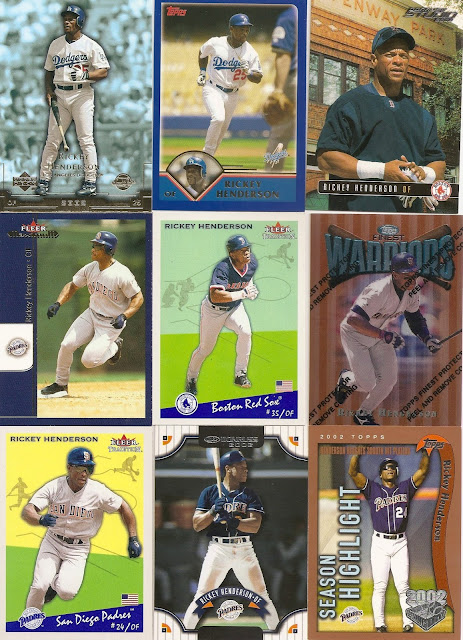 And...he had a mess of Rickey. 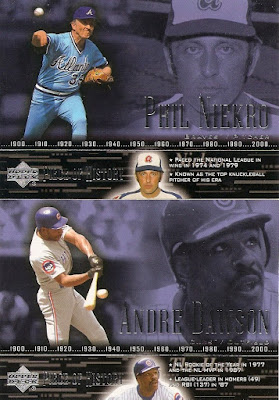 The highlight of these boxes were the inclusion of several sets that felt completely based around retired players. So you got sets like 2002 A Piece of History, which is a cool one, as it does some fun things with design. 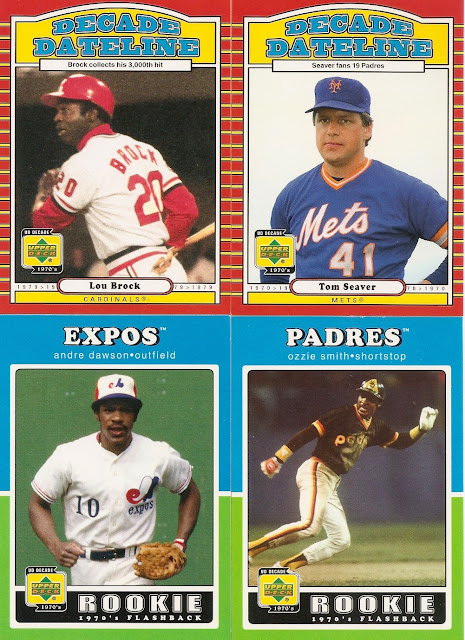 And of course this means there was some 2002 UD Decades-70s in there, because why wouldn't there be? Some inserts, some rookie flashbacks, but all welcome. Those white Expos uniforms were great, and Ozzie in SD is always fun. 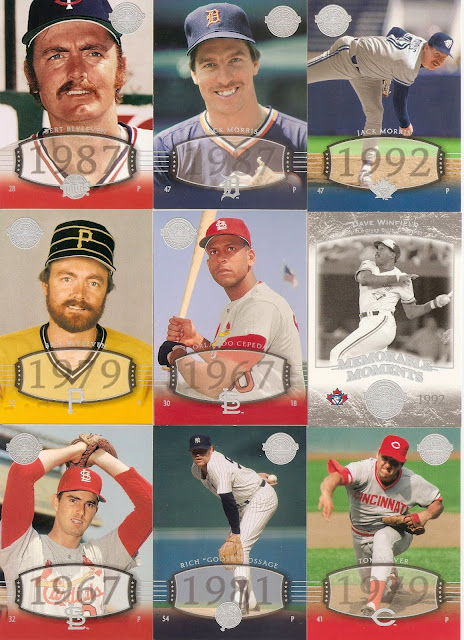 2004 UD Timeless Teams is one of those sets where the well of cool cards from it never seems to run dry, and I keep finding great cards, like the Bucs Blyleven or the Baby Bull, even if I thought I'd charted a lot of the set's territory. Heck, I even sneaked a Winfield insert out of it. 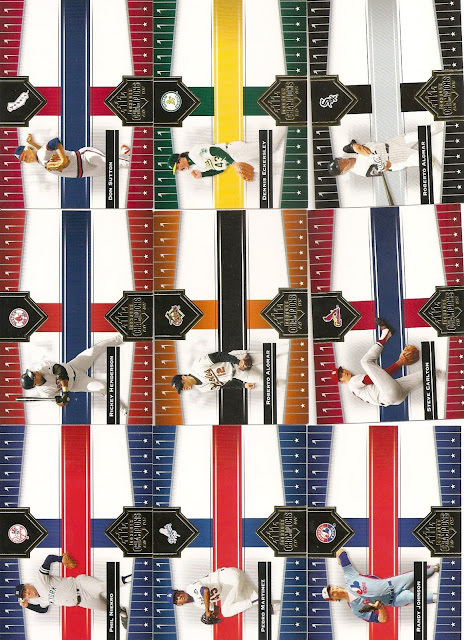 Yes, 2005 Donruss Champions is a very oddly-designed set (lots of open space), but where else can you find modern-era cards of Niekro as a Yankee, Sutton as an Angel or Pedro as a Dodger. And yes, that Randy is my second Expos issue of his of the show. 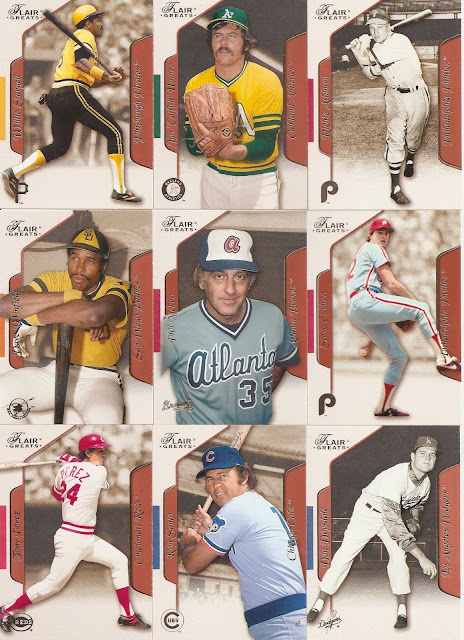 The biggest set turnout from these boxes was EASILY 2003 Flair Greats. I'm not gonna scan everything I got from this set, but there was a ton, and it all reminded me how great this set was. Just well-put-together, well-designed, and well-curated. Ron Santo, pre HOF boom, is in here, and that says a lot.

We'll end on these three.

These three are guys I never pull cards of. Larry Doby maybe a little more than the other 2, but...Dizzy Dean's rarely in modern products, and most younger collectors have never heard of Gabby Hartnett. And yet here they are, representing their storied careers in 10-cent bins. That just makes sense.

I had a blast at the Philly Show this year, and I'm very happy with my haul. A show of this magnitude means I'll be looking forward to the next one in March. Hopefully some of these same dealers will be back, and hopefully they'll be prepared.
Posted by Jordan at 8:11 AM
Labels: Card Show