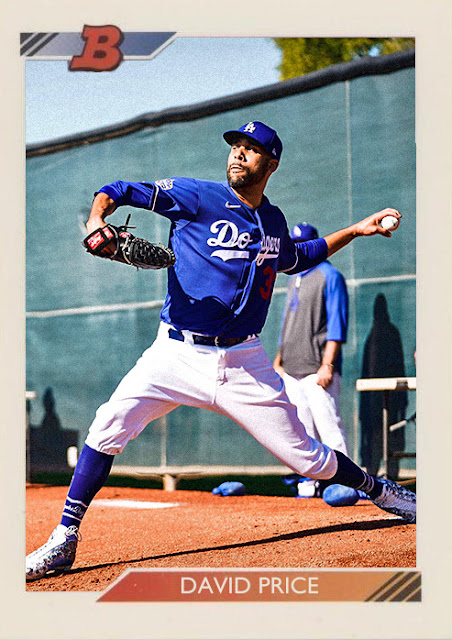 Yeah, this is probably my favorite one I've done so far this year.

I'm honestly really intrigued by Price's inclusion in the Betts deal. I mean, yes, Mookie to LA itself is pretty great, and makes that outfield a near-classic one. But...Price to LA has some very weird inclinations.

Heck, it reminds me a little of Josh Beckett landing in LA back in 2012. By that point, Beckett had pitched some great seasons, some Championship seasons, and some weak ones. And seeing him play for the Dodgers was equally weird, because here's this guy that used to be leading rotations in Boston and Miami, and now he's like a 4th or 5th man behind Clayton Kershaw, Zack Greinke and Hyun-Jin Ryu. How is this supposed to make sense?

And that's kinda where I'm at with David Price. This guy was unstoppable with Tampa, he pitched into the playoffs with Detroit and Toronto, had a great year with the Red Sox despite injury and controversy, and all of the sudden he's dropped into an already-stacked Dodger rotation, and will be asked to pitch behind Kershaw and Walker Buehler.

It's honestly a matter of whether or not Price's heftier numbers show up. Because he's one of the best pitchers of the last 10 years, a major strikeout artist, and an asset for any team that has him. I can't imagine that he's done ruling the mound after a few seasons in a stadium that's bad for lefties. Dude still had a 46-24 record in Boston, which isn't bad, though the cumulative 3.84 ERA is his highest out of the four teams he's played for.

So maybe he gets back to his old tricks, supplants Clayton Kershaw in the rotation, exceeds expectations and safely pitches into the playoffs again, continuing his streak of having generally alright postseason luck. Or...maybe he pitches 10 games this year and spends the rest either benched or on the DL. I'm hoping it's the former, but I'm prepared for either outcome.

Coming Tomorrow (?): Speaking of worrying Boston pitchers, this guy was so close to being a Cy Young contender a few years ago, and is now struggling to stay consistent and healthy.
Posted by Jordan at 9:49 PM
Labels: Custom Cards, David Price, Dodgers, Josh Beckett, Red Sox