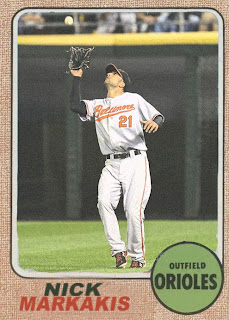 I made this one last week, just before the whole race to the playoffs began. Sadly, while the race is well underway, Nick and his lovable team of Orioles won't make it to October glory.

Still, they did have a pretty okay season- they started off slow, and they had a huge resurgence under Buck Showalter. But they still lost 90 games. But they weren't that bad, anyway. Hell, I think they were better than Boston in the end there. And I can think of so many other teams (The Cubs, Dodgers and Rockies, for instance) that did worse than the Orioles.

And the truth is, with players like Markakis above, Adam Jones, Matt Wieters, Nolan Reimold, Brian Roberts, Luke Scott, Felix Pie and Koji Uheara, it's questionable why they lost. I mean, whenever I go up to Camden Yards (a friend of my dad's gets tickets), I never boo the Orioles. They're just a fun team to watch, similar to the Giants. You get so relaxed watching these teams to the point where you figure that the game isn't about competitiveness, it's about fun.

So that's what the Orioles have going for them. Their fanbase may not be the largest, and they may be tucked away in a minor city in Maryland, but gosh darn is they're so darned fun to watch.

Coming Tomorrow- He fields! He hits! He's got a sweet beard! Your Philadelphia Phillies Wacky Outfielder is tomorrow's custom.
Posted by Jordan at 7:21 AM