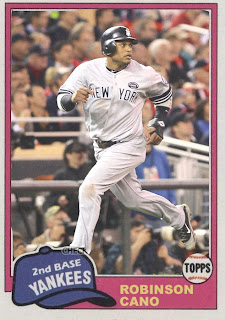 Today was a bit of a dark one for me. My classmates in school are all diehard Philly fans (Mainly because I live about 20 minutes away from Philly), and they all want a Phillies Rangers series. And I had to piece my mind around the fact that that could be it. That the Yankees might not make the Series this year, and there's always next year.

Tonight...I threw all of that away as I watched CC "You can all go home, the CY Young is mine" Sabathia fan down the starstruck Rangers (Nelson Cruz deserved it. An eye for an eye, an ex-Ranger for a current Ranger). Granderson wowed with a homer. Swisher and Cano swatted homers backfield. All in all, it was a great game.

Friday night we play Texas again back on their turf. Phil Hughes is pitching, and frankly, that's all you need to know.

And look...if the Yankees don't end up getting to, let alone winning, the World Series, I'll be fine. I'll just be smiling as the boys from Arlington get stunned by Werth and the gang.

And Nolan Ryan will sit there in the stands, with his "Pissed off Science Teacher spotting you talking during a lecture" face (While Dubya smiles beside him).

And Schmidt, Carlton, Kruk, Schilling, Bunning and all the other great Phillies in the room will stand up and cheer. Cause it's Philadelphia's year.