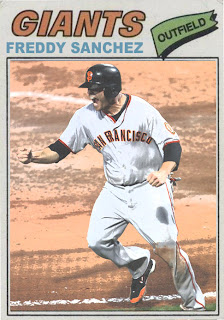 I was on a busride home from a school marching band competition, listening to the Phillies game on ESPN radio. Myself and the 15 other rabid Philly fans/drummers were listening is awe as Uribe hit the 8th inning home run, and as Wilson battered down Howard for the last out of the 9th. The entire bus stooped into a depression, with obsenities and annoyed hand signals thrown about. For the first time since 07, the Phillies had failed to clinch the NL.

And everyone was still trying to piece their minds around the fact that the Giants and the Rangers, two usually unspectacular teams fueled only by pitching aces and little star power, would be facing each other for the world series.

This was the outcome that nobody saw coming. Sure, the Giants are awesome this season, but who would have guessed that they would defeat the Phillies? Not me.

This may be the first year since 2007 that none of my favorite teams have made it to the series (And I really don't want to talk about the 2007 series. I really, really, really don't). And while I'm probably going to root for the Giants (Sorry, Night Owl, but they seemed great in July when I saw them), I really don't know how I'll enjoy this series.

Good news is I'll be churning out more customs tomorrow.
Posted by Jordan at 11:58 AM