This contest, that was first spoken of when I was in New Hampshire, has been still rolling even as I ready myself for school. But who cares about school. Captain Canuck's Braves are leading with 80, and the closest team is the playattheplate's Rangers with 61, and the defunct Brewers with 60. But still, anything can happen. 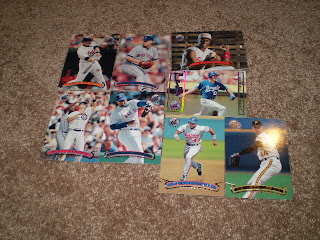 Chris Hoiles of the Orioles. A decent swing. 3 points

Mike Stanton of the Red Sox. Sadly not the power hitting outfielder for Florida. 3 points.

Ron Gant of the Reds. Now that is a great card. Just the look on his face alone says it all. 5 points.

Mo Vaughn of the Red Sox. A shame what happened to this dude. 4 points for the shot.

Tony Tarasco of the Expos. A nice basepaths shot. 3 points

Estaban Loiaza of the Pirates. An average pitcher shot. 2 points 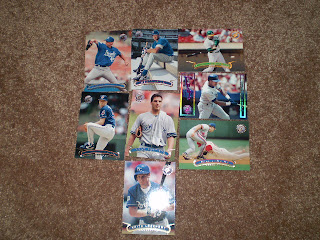 Scott Leuis of the Twins. Simple yet effective. 4 points

Danny Tartabull of the Athletics. Whenever I think of him, 2 things come to mind. 1- how his foul ball off the finger led to his retirement, and 2- That Seinfeld Episode. 4 points

Brian Hunter of the Astros Team TSC. Never made it. 3 points

Orel Hershiser of the Indians. Fun Fact: Orel graduated my High School. Seriously, there are articles on the wall of his playing time. Also, he was a great pitcher. 5 points

Mike Lansing of the Expos. A nice play. 4 points

Keith Lockhart of the Royals. Got it. 1 point 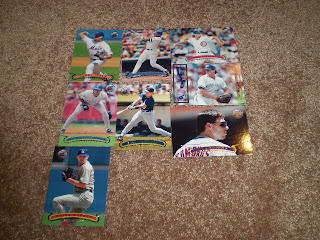 Bobby Jones of the Mets. Memories of Counting Crows over the Shea Loudspeakers come to mind. 3 points

Ruben Sierra of the Yankees. He had such potential...4 points

Turk Wendell of the Cubs. (Not actually Turkish). 3 points

Al Lieter of the Blue Jays Team TSC. Got it. 1 point

Michael Tucker of the Royals. Waiting to steal. 4 points

BJ Surhoff of the Brewers. Got it. 1 point

Brian Barber of the Cardinals. A nice tight shot. 3 points

Jim Edmonds of the Angels. What a cool photo. 5 points 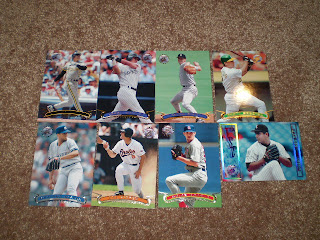 Orlando Merced of the Pirates. A nice swing. 3 points

Larry Walker of the Rockies. A nicer swing. Is he a Hall of Famer? 4 points

Kevin Ritz of the Rockies. A good pitcher shot. 3 points

Mariano Rivera of the Yankees. Greatest. Closer. Ever. 5 points

Cal Ripken of the Orioles. When I grow older, and have children, I can tell my kids I saw this guy play. 5 points.

Wilson Alvarez of the White Sox Team TSC. Never made it. 3 points

Not a single Braves card was pulled tonight, but they are still in the lead with 80. Somehow, of all teams, the Yankees caught up tonight, and are the closest with 63, while the Rangers and Brewers have 61, and the Royals have caught up to them with 56. So it's still anyone's game, and the contest will continue tomorrow night.