Well folks, we've reached the end. There are three packs left out of the 1996 box. I know a lot of people haven't been mentioned, but the Braves did most of the card hogging in this contest. So I apologize to all who chose the Angels, Astros, A's, Cardinals, Dodgers, Expos, Giants, Indians, Mariners, Mets, Orioles, Padres, Phillies, Pirates, Reds, Red Sox, Tigers, Twins and White Sox. As for everyone else, the game is still winnable. 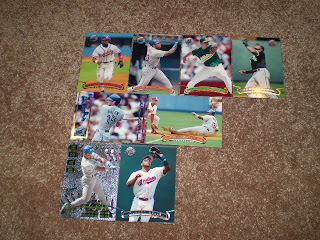 Marquis Grissom of the Braves. A decent running shot. 3 points.
Ryan Thompson of the Mets. A nice swing. 3 points
Don Wengert of the A's. Got it. 1 point
Frank Thomas of the White Sox. Any doubt in anyone's mind that this guy's the greatest White Sock ever? Didn't think so. 5 points.
Shawn Green of the Blue Jays Team TSC. One of the Greatest Jewish Ballplayers, only fourthed to Koufax, Greenberg and someone else that's better than Shawn Green. 4 points. Mazel Tov!
Tony Gwynn of the Padres. The regular version. So...I say it's a double. 1 point.
WOW! A Raul Mondesi BASH AND BURN Insert for the Dodgers. That works. He certainly bashed, and afterwards, his career burned. I keed, I keed. This is a 5 pointer, definitely.
Albert Belle of the Indians. Double, 1 point 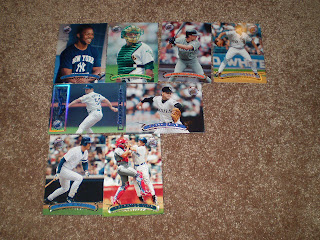 Alex Fernandez of the Yankees. Forgot he played for the Yanks. DH most likely. 4 points cause it's a cool shot.
Terry Steinbach of the A's, Great shot. Nice way to capture a catcher. 4 points.
Kurt Abbott of the Marlins. Nice stance. 3 points
Bobby Thigpen (?) of the White Sox. A decent pithcer shot. 3 points
Joey Lawrence Team TSC of the Padres. Never made it. 3 points
Roger Bailey of the Rockies. Nice horizontal. 3 points
Paul O'Niell of the Yankees. The Warrior. 4 points
Fernando Vina of the Brewers. Have it, 1 point 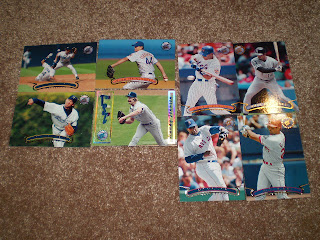 Alright. The ripping is over. After 48 packs of cards, the winner of all his team's loot, plus some extras from me...is...
CAPTAIN CANUCK!!!
The Braves ended up with 96 points. Before any of you ask, no I was not bribed by the Captain. It just turned out that way. The Braves had a lot of stars in the 90's. The closest team to the Braves was Ryan LaMonica's Yankees, who has 77. (It's hysterical, how both teams ended up in a score that was a year they were in the world series. Heh).

Alright. Captain, send me an email with your info, and I'll get your prizes sent out this week. As for everyone else, thanks for playing. Who knows, I might pull another contest sometime soon. And hopefully, it'll be shorter, and less complicated.
Posted by Jordan at 9:36 PM