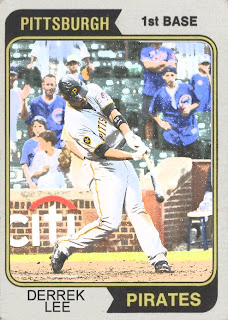 When people who were traded during the offseason get traded again during the regular season, it's a bit tedious. For one thing, just as you're getting used to someone in one uniform, he winds up going somewhere else. This must be especially hard for Topps. Last year when Miguel Tejada was traded to San Diego, they were probably smacking their heads with blocks of wood, because they had a card of him in Baltimore prepared.

But then, there's Derrek Lee. Derrek Lee hasn't been gotten right on a base card since 2009. In 2010, Topps made a Cubs card of him, but then toward the end of the season, he was traded to the Braves, via a waiver deal. And Topps had no Braves card of him. If I'm right, they made up the Derrek Lee Braves card earlier, in the 2011 set. By this point, Lee was already in Baltimore. So now that Topps was already working on an Orioles card, Derrek Lee was traded yet again to Pittsburgh. I know. So now, Topps might finally put out a Pirates card of him. Keyword- might.

Coming Tomorrow- His career's on the decline, his hitting has diminished and he can't run like he used to, but he's still RAAAAUUUUUUULLLL.
Posted by Jordan at 6:48 AM