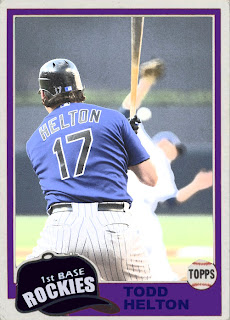 Is Todd Helton one of the most underrated players in baseball today? Possibly. Sure, it's a known fact that the early 2000's are over for him, but his power hitting days are not. He can still hit pretty well, mixed with the occasional injury. Still, the Rockies aren't doing the greatest this season, but players like Helton are helping them rise above mediocrity (read: The Padres), and stay out of last. And while Todd isn't having the greatest season, he's still a borderline Hall of Famer.

Also, I'm beginning to like these "New teams on Old Designs" customs more and more.

Coming Tomorrow- One of today's best knuckleballers (And before you all ask, I am NOT making an RA Dickey custom), who just achieved a huge milestone.
Posted by Jordan at 6:52 AM