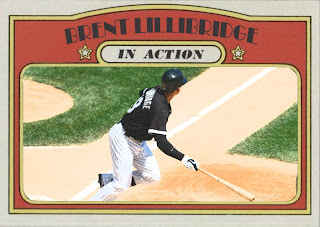 Alright, folks. This is a story I'll never forget, because of many huge points that I'm about to get to. Part of it eminated from this post. So I'll just share the original post, before I get into the mind-blowing stuff.

I have already mentioned the fan of mine, who occasionally sends me suggestions for customs, which I gladly create. Before this one, he was requesting a lot of Dodgers, mainly because he's a Dodger fan. But he came to me, about a week before I left for New Hampshire, and he said he wanted to see a card of Brent Lillibridge. And the reason behind this, is not only the fact that he's been getting a bunch of plate appearances this year, but because of the fact that Mr. Lillibridge knows this fan- they spend some time together during the offseason. And he has also helped the world, helping the Dominican Republic and South Africa. The first thing that popped into my head was "Isn't this the greatest idea?"

Then another thought popped into my head. And this one was more important. You see, if the fan knew Brent so well, he could show Brent the card. And if he likes it, and he shows it to his team, I could have an entire ballclub asking me for customs. And it's be equal parts rewarding and chaotic. I'd have to fend off weekly offers from players I've never heard of, like Dayan Vicedio, and I'd get swarmed by requests from everyone else. I'd have to explain to some people that they're on the DL and I can't make it, or I can't find any photos of them, or "Ozzie, I'm not making any manager cards."

It was just a thought. But I still thought it'd be awesome for a MLB player to see one of my customs of him. And I got an email back later from the fan, asking permission to show Brent. And I agreed. I haven't heard back from him, but I'm guessing things went well.

Before you ask, no I did not make this up. This story is just too good to make up. And I hope that encourages people, that I do not deny custom requests. If anyone has any players they wanna see on a card (Nyjer Morgan and Derrek Lee are on the way), just ask in the comments. And I hope that Brent likes this card as much as this blogosphere does.

I posted that at 10 to 7 this morning, because I had to leave for school 30 minutes later. Actually, I was a bit nervous sharing a lot of this, but I figured it's be fine. So I post the custom, and the anecdote, I go to school, get bored out of my mind for most of the day, and come home.

Already sitting in my email inbox are two emails. One is from Captain Canuck, about the contest he just won. The other is from, you guessed it, the fan. And he brings good news. I will recount the awesome parts of his email word for word. Seriously, for a guy who makes custom cards on his spare time, this is epic:

So sorry I never followed up with Brent's reaction to your custom card of him! He really liked it. In fact, quoting him, he emailed me and said, "Wow, he's got some mad skills.""

So that's awesome on its own. Brent Lillibridge loved the card I made of him. And at first, I didn't know what to think. I thought it was crazy that someone I made a card of loves my work. Then of course, he said this:

Now my jaw was on the floor. Because Brent Lillibridge loved my card, and now it's his Twitter Picture, and now other people around the world can see my work. And the whole "White Sox badgering me for customs" thing I joked about? That might actually happen.

So let me reinforce this once again. Requests are golden. If I never accepted that request from the fan, I would have never had a guy who I made a card of post it as the picture on his Twitter account.

So, uh...thanks Brent, if you're reading this. And I hope the White Sox do MUCH better next season. Seriously, I'm not just saying that. I hope their 2012 season outdoes everyone's expectations. And again...thanks for liking the custom.