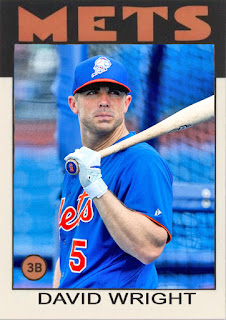 (For those of you counting, yes, I have made an Indians custom, a Mets custom and a Rangers custom before a Yankees, Phillies or Orioles custom has even surfaced. I blame Zimbio)

Poor, poor Mets. You really can't help but feel sorry for them. Even if they have a strong resurgence, they'll still have to contend with three really strong teams for the helm of the division.

And I say this with all the respect in the world for the Mets. Being a Phillies fan and tolerating the Mets is very rare, especially 20 minutes outside of Philly, but I don't hate the Mets. I think David Wright is a fun player, and I think the team will have some potential in maybe 5 or so years. But as of right now, they're kinda screwed.

The Phillies, Braves and Nationals will all most likely be stronger than the Mets, because all three have had some time to compose themselves, and form a strong teams. Maybe with less emphasis on Philadelphia, but either way.

I could be wrong. The Mets could have a fantastic season, surging under people like Lucas Duda, John Buck and Dillon Gee. Wright could stay healthy the whole time. So could Ike! The Braves and Nats might fail miserably. The Phils might end in third, like we're all thinking. It could go any way this year, even in favor of the Mets.

Still, I hope for the best, and I hope they don't finish in last.

Coming Tomorrow- One of the two D-Backs outfielders to split for a stronger team. This one stayed on the west coast, and added another outfield arm to a eternally-underdoggish team.
Posted by Jordan at 6:58 PM