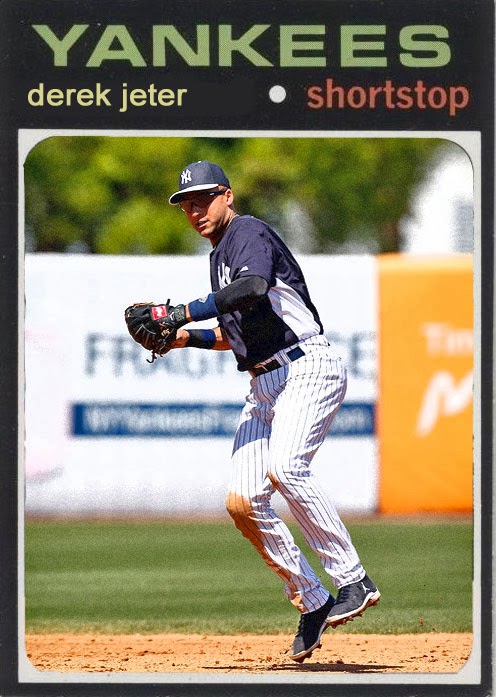 Last year, four players that I had been following and collecting since I got into the hobby all announced their retirements. And they were four big ones. Todd Helton, Andy Pettitte, Roy Halladay. And all of those three were bad.

But the worst part was losing Mariano Rivera. Every year of my life thus far, Mariano Rivera has been the Yankees' closer. As an eighteen year old, I cannot remember a time when Mariano Rivera was not our closer, and 2012 does not count. So to have somebody that valuable, somebody that you can't survive without cheering for, team notwithstanding, just leave after that long, hurts.

Today, I heard the official news that 2014 will be Derek Jeter's last season. And boy, if I thought I'd be lost without Rivera, I'm gonna feel really lost now.

Jeter's always been my favorite player. Even when I rooted for A-Rod, there was still Jeter primarily. Jeter was never NOT good at his job. No steroids, no serious injuries, no slumps ever took away his abilities, especially in his prime. The man has five World Series rings. Five Gold Gloves. Thirteen All Star Game appearances. Only sad part is that he never got an MVP award, though he came very close in 2006. You can blame Justin Morneau on that one.

I don't think there will ever be another player as beloved as Jeter in New York. People are going to come close, but they will never surpass. Him and Rivera, really.

It's going to suck in 2015. No Jeter, No Rivera, A-Rod'll be depleted further, Tex'll be gone. The team's likely headed for another decade-long drought, and I don't know if they'll be able to stop it.