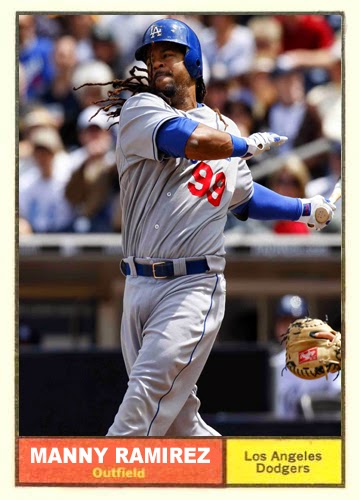 Now...think about what you're doing for a second, Mr. Ramirez. I mean, the fact that you're bringing me out of my self-imposed hiatus to talk you off the ledge is mind-shattering enough.

Please...this makes your, what, second return from retirement? So, two different times, you've said 'enough of this', only to come back? And both times, you were leaving some pretty meaningless teams. Like the 2011 Rays. And...okay, the 2012 Athletics turned out to be pretty awesome, but they would have sucked if you were DHing.

So after all of that...you decide that your best move is signing with the Chicago Cubs.

I'm sorry, Manny, but that is not your best move. That is the move you go with when the other 29 do not work. You could have gone to ANY of the other 29 teams, and they would be happy to have you. Go back to Boston for all I care. Go to Houston, or Seattle, or San Diego. But no, you had to go to the butt of every joke this season. Chicago. A city where their best pitcher can't even win a single game.

And yeah, you're saying that there's no chance of you coming back, because you're coming into the minors as a 'mentor', and 'player/coach'. Yeah, you know what is one half of player/coach? 'Player'. As in, 'YOU WILL BE PLAYING A LITTLE BIT OF BASEBALL'. I mean, mentor is kinda like a joke. They tried having mentors on Big Brother one season. You know how that ended? They ended up PLAYING the game. Not just watching and sitting on the sidelines the whole time. They played. Sure, they got their asses kicked by 20-year-olds named after planets, but they PLAYED.

So honestly, what you're really trying to say, Manny, in saying 'I'm joining the Cubs so I can be a mentor to their minor league teams', is 'Manny wants to play again, and Manny is really, really desperate for a job'.