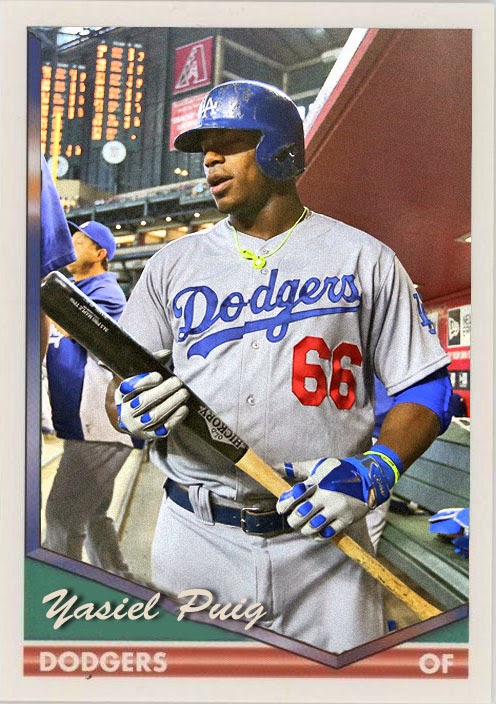 Being a baseball fan and talking about Yasiel Puig is like being a Star Wars fan and not talking about J.J. Abrams. Sooner or later, you just kinda have to. Which is why I'm going to.

I get it, too. Yasiel Puig is the ultimate baseball story, because he defied great odds to get out of Cuba, and get to the MLB, and then basically become Lindsay Lohan for a month in LA. You don't talk about him, you're dodging a huge bullet.

Which is why I'm gonna talk about the weirdest Yasiel Puig story I heard this week.

You see, Yasiel Puig's escape-from-Cuba story has become a pretty big deal among sportswriters. It has become so big that the rights to Puig's story have been sold to Hollywood. Yes, sports fans, you may end up seeing the true story of Yasiel Puig play out in theatres all over the world.

And yes, I am that guy who spells theatre the artsy way. Come at me.

It seems pretty odd, the prospect of a movie about a ballplayer  coming out while the ballplayer is still active in the sport. Like, maybe if the movie's awful, the Giants fans could use it to taunt Puig. They would just chant the title of the movie every time he'd go up to bat. I mean, it worked the last time, too; for a good year the Yankee fans called Johnny Damon 'Fever Bitch'.

The funnier part of this potential 'Puig's escape from Cuba' movie is that a potential director is already being rumored, and said director is none other than Brett Ratner.

Anyone who paid money opening weekend to see X-Men: The Last Stand just cringed at the mention of Ratner's name.

Brett Ratner makes movies that are sort of good, but have one huge flaw preventing them from being taken seriously. And you're asking Brett Ratner to direct a movie, a SERIOUS MOVIE, about a Cuban ballplayer escaping from his homeland by stowing away with a drug cartel? Brett Ratner. The director of ALL THREE RUSH HOUR MOVIES. The guy who said 'you know what, the world IS ready for one more Rush Hour movie.'

So yeah. I personally want Yasiel Puig to keep playing really well, so that if this movie is as awful as it sounds, he can outlive it.

Coming Tomorrow (?)- He got suspended. He came back. He's Milwaukee's only hope. He's not Ryan Braun. And he fights dirty.
Posted by Jordan at 9:22 PM
Labels: a brief tangent about absolutely nothing, Brett Freaking Ratner, Custom Cards, Dodgers, movies, Yasiel Puig