So, who can the Phillies afford to KEEP? 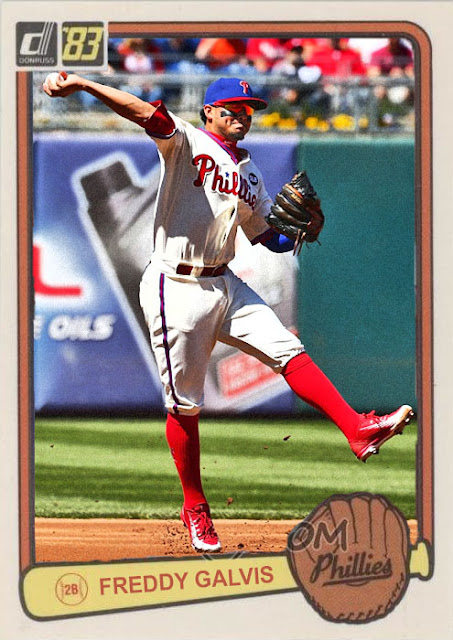 We've got about a month left until the trade deadline. The Phillies are practically DOA at this point, which means they've got to decide who to keep and who to let go. Right now, they have to think of the team that's gonna win championships in the future, and not the squad they've currently got. So, technically, they can get rid of anybody they want if it'll mean getting more prospects.

So...if nobody's safe, then who...is safe? I don't think I worded that properly.

Anyway, here are the guys that, in my opinion, are not in danger of being traded away this postseason.

-Freddy Galvis, the man above the header. He did go down a few notches in my book because he took steroids during his big breakout season. However, this season he's much more important, because he's taken over at shortstop full time, and he's actually hitting pretty well...or at least well enough to stick around. I don't think he's hot enough to be traded.

-Carlos Ruiz. He's not doing too well this season, and he's coming upon on his tenth season as a Phillie, as their starting catcher. He's not hitting well enough for people to want him.

-Maikel Franco, Odubel Herrera and Ken Giles- these three are going to be HUGE in five years. Giles will be the future closer, and by the future, I probably mean 'by August'. Herrera and Franco are already hitting well enough to be noticed. Wouldn't be surprised if Franco gets some semblance of an AS nod.

-Aaron Harang. Because the Phils need at least one competent starter when Cole leaves. The word competent being a huge embellishment in this point.

-Darin Ruf. Currently in the minors, but unless for some reason the Phillies run out of room...he's sticking around.

-Cody Asche. Hasn't been as indispensable as usual, and isn't the starting third baseman, but he's useful enough organization-wise to stay around. This one could change, and he could end up being a throw-in for any huge deals.

-Ben Revere. Went back and forth on this one. Ben Revere has the capacity to be the face of this franchise. Only problem is he's hitting so well that he's put a huge target on his back for the trade deadline. This isn't 100%, but in my opinion, he'll stick around.

-Chase Utley. Biggest shock. I think he's sticking around because he's not had a very nice season. Therefore, nobody wants to take him, if he's not in top shape. If he had 2014 numbers, this would be easier. Utley will stay around for a little while longer.

This means that Hamels, Howard, Papelbon and possibly Francoeur, will be dealt at the deadline. I think Howard will have enough allure for other teams. The other two are sure things.

Coming Tomorrow- The Twins are still red hot. Here's the guy who's been in charge of fueling the comeback.
Posted by Jordan at 10:22 PM
Labels: Custom Cards, Freddy Galvis, Phillies