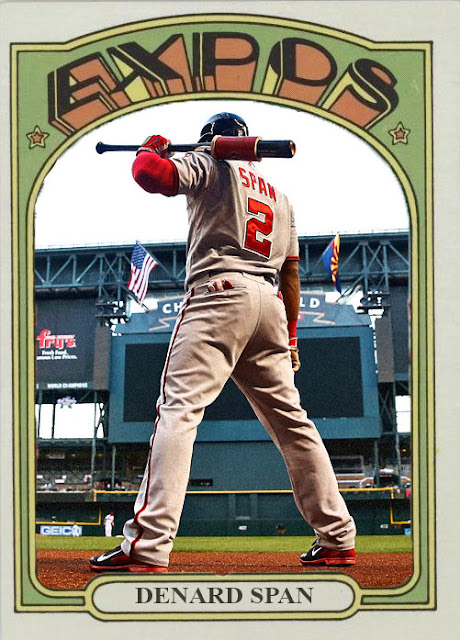 First of all, this is one of my favorite customs I've made in a while. It looks cinematic. Like it should be on a movie poster.

Over the past few years, the Nationals have accumulated the strongest lineup in baseball. Their infield is exemplary, their pitching staff is overflowing with talent, and their outfield is even strong without Jayson Werth, as Michael Taylor is an even stronger choice to contend with Harper and Span.

This is a team that consistently wins the division, and consistently makes headlines...and yet they've not been successful in the postseason yet, which blows my mind. If anybody's an October talent, it has to be Bryce Harper, especially this season.

Either way, people like Denard Span, Danny Espinoza and even Ryan Zimmerman, who a lot of people have counted out, are playing really well this season. Especially Span, who's still hitting, and playing the outfield, like an absolute pro.

Unless something instantaneously sparks in Queens, the Nats are likely going to end up on top, and hopefully will have better results in the postseason.

Coming Tomorrow- One of the most fearsome home run hitters in the game, now in his new location in Detroit.
Posted by Jordan at 11:18 PM
Labels: Custom Cards, Denard Span, Nationals