Missouri, you should be very ashamed of yourselves (An ASG Voting Update/Rant) 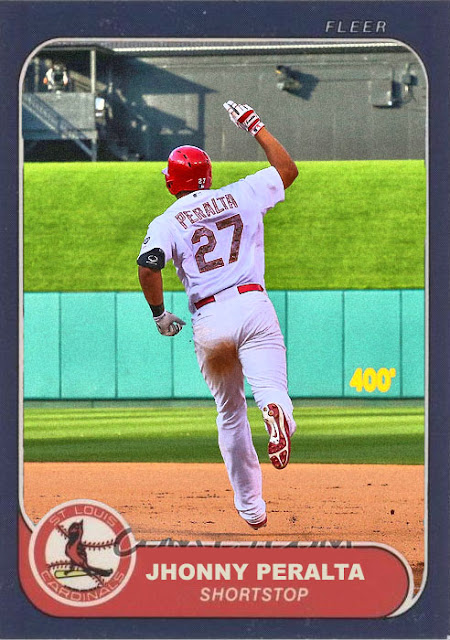 This post is not going to be a rant about the Royals' fans jamming the votes and successfully making the AL All Star roster a potential 'the Royals plus Mike Trout and Miguel Cabrera' roster. I mean, yeah, roster stuffing is bad, and the Royals fans are the main culprits, but they are not the only culprits.

The NL ASG vote leaders came out recently, and, most surprisingly, they revealed Jhonny Peralta as the vote-leader for shortstops. And no, it wasn't a typo.

To me, Peralta's not the top pick. I'd give it to Tulowitzki again. Or Brandon Crawford. Not because Peralta's not having a good season, but because Crawford is having a more impressive season. It's more astounding that somebody like Brandon Crawford is doing well, because he's been a lower-tier member of those Giants teams, and now he's finally stepped up...only for the guy who always has a good season to beat him in the voting.

Peralta's not the only culprit here. Matt Carpenter and Matt Holliday have damn near cliched spots in the roster. And while Carpenter...yeah, he deserves it, I voted for Todd Frazier. I thought that Frazier slightly edged out Carpenter when it came to 'best third baseman in the league' status. Apparently I'm in the minority.

Holliday...yeah, he's good, but I don't think he's starting-ASG worthy. I would have put Joc Pederson in there. Nori Aoki is somehow next in line after Holliday, but I think that's from the plethora of pinatas Royals voters who somehow don't realize that Aoki's not on the team anymore.

The bottom line in all of this is that not only have the Royals fans hijacked the All Star voting. ALL OF MISSOURI HAS HIJACKED THE ALL STAR VOTING!

I'm not gonna act like this is the first time this has happened. Back in the day Giants fans would try to rig the voting towards Pablo Sandoval by sending dozens of votes his way, robbing David Wright of a deserved start. So it's not new ground. But it's at a wider scale. The Cardinals takeover isn't as high-scale as the Royals one, but it's still pretty damn evident. In addition to the three guys who are first in voting, there are still two more who've been bumped to a mere second in the voting in their respective categories.

So, something needs to be done in terms of making this process less riggable. I mean, step one would probably include handing ballots out at ballparks again, rather than letting fans have 100% of the online vote, and the capacity to rig. No, ballpark voting makes it safe, evens it out.

I swear, I've already ranted against the actual telecast of the All Star Game. AND I've ranted about the way the rosters are announced. Now you have me ranting about the way people vote!

Remember how the All Star Game isn't supposed to be taken seriously?

Coming Tomorrow- Speaking of teams that hijack the ASG voting, here's the one they call Moose.
Posted by Jordan at 9:42 PM
Labels: All Star Game, allow me to explain why this pisses me off, Cardinals, Custom Cards, Jhonny Peralta, Ranting, Royals