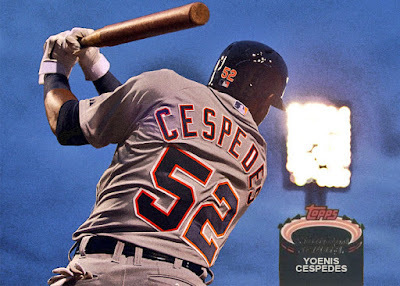 (Really proud of this one).

It takes a lot of skill to go up at the Home Run Derby and win, and then go up the next year and win it again. But, Yoenis Cespedes has definitely done that. He's a pretty strong hitter, and he can go for distance like nobody else in the league.

I did get worried last year when he was traded to Boston...and then promptly didn't make that much of an impact. Like, they signed him to hit home runs, and didn't really do a ton. But, he signed with Detroit this year, and promptly got right back to hitting, and making fans pretty proud, especially the ones who had gotten worried when Torii Hunter left.

Coming Tonight: The Dodgers are flirting with returning to their hot-hitting ways from earlier this season. It helps that their new starting third baseman is doing pretty well himself.
Posted by Jordan at 11:12 AM
Labels: Custom Cards, Tigers, Yoenis Cespedes