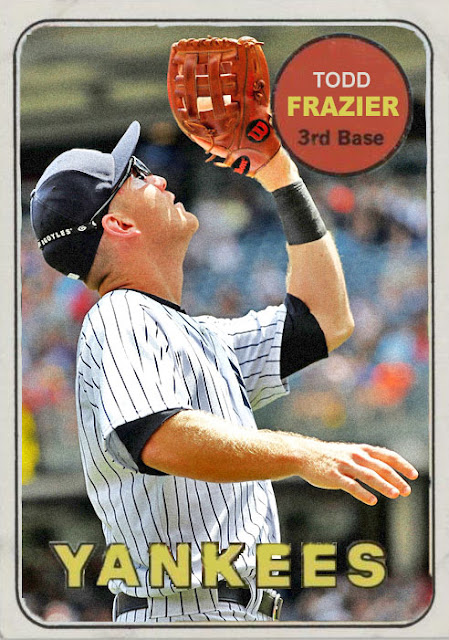 I'm sad for selfish reasons. I was getting used to Todd Frazier playing in New York. Unfortunately, I should have been more specific.

Todd Frazier, who I had assumed the Yankees would resign to a deal because A.) fans love him and B.) he's a cheap free agent, signed a two-year deal with the Mets, who are trying to rebuild and move on from David Wright.

I'm a bit confused as to where it leaves the Yankee infield, but I don't think we're completely lost. It just means we're either going to have to call-up Gleyber Torres immediately and plug him into third or second, or we'll have to use Darwin Barney or somebody until Torres is ready. For a team that's so huge heading into 2018, I didn't especially think there'd be an under abundance question mark, but here we are. So it's a fixable problem, but one I wish we didn't have to solve.

In terms of where it leaves the Mets...they're in a place where Flores and Reyes can play from the bench, Amed Rosario and Asdrubal Cabrera will have to start, and Dominic Smith will probably alternate with Adrian Gonzalez, while the outfield will remain Bruce-Conforto-Cespedes. It's not pristine, and it's not what the Mets had 3 years ago, but coming back from a down season, it's surprisingly impressive, and if everyone stays healthy, they could make a run at a division title.

So...this move puts both teams in a good place, but one I doubt either thought they'd need to be in. The team that needs to keep good players on the bench is not the one who'll be indefinitely making a run for the top of the division this year.
Posted by Jordan at 10:31 PM