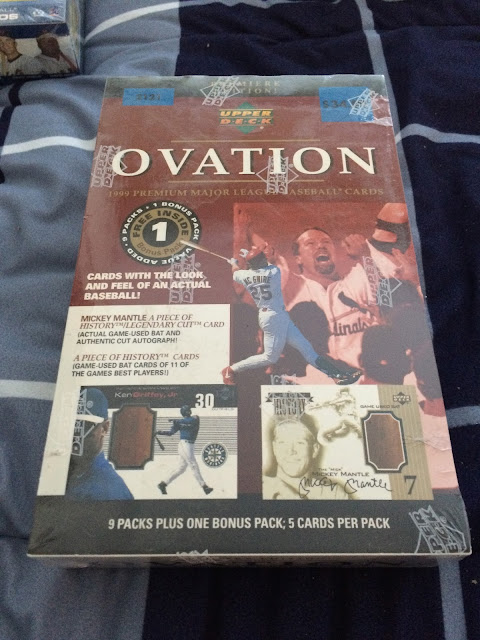 Alright. You guys deserved a better box break after I finished off 1999 UD Choice. How about this one?

Not exactly premium, but, as you'll see, effort was put in. Plus, the hook was that you could find a game-used bat card of somebody good, which was kind of new in 1999, after SP Authentic made it a thing you could do regularly. 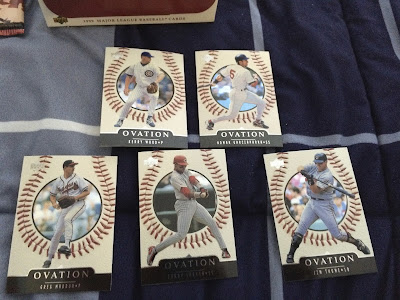 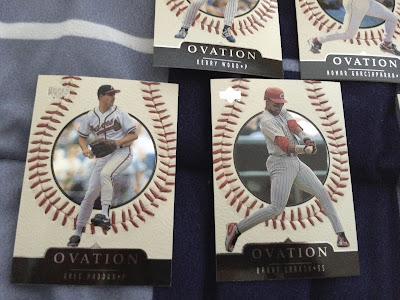 I shot this before Thome's election, but these two Hall of Famers can show the general base design, and it's pretty cool. Player cutout with circle of background, with ridged stitching pattern and, again, ACTUAL EFFORT PUT IN. This has been constructed to look good. Where was that with 1999 UD Choice? 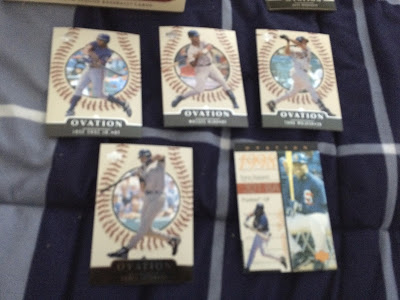 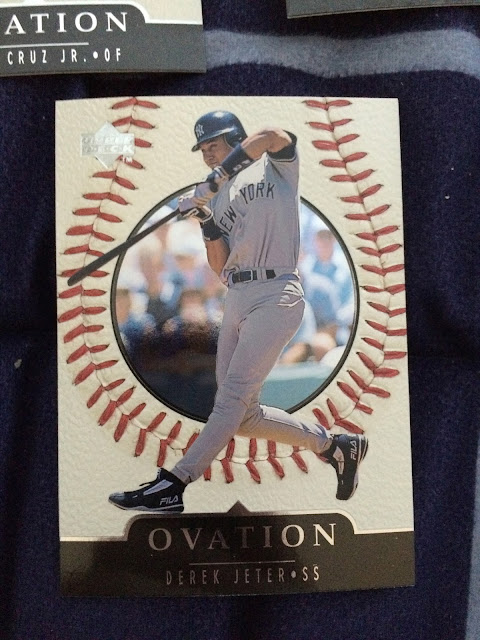 THERE HE IS! THE GREATEST! Even if his cards are overexposed and he's tanking the Marlins, Derek Jeter is still one of my favorites, and I will never not enjoy pulling his cards. This is a pretty nice one, too. 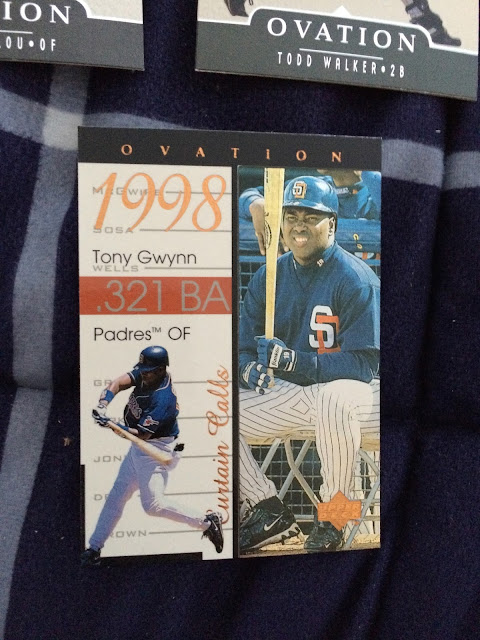 Hey, an insert that actually looks cool and isn't contrived. Plus, there are several Tony Gwynns on this card and none of them look bored. Plus, this one's pretty well designed, too. 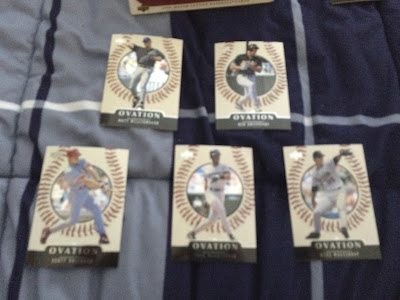 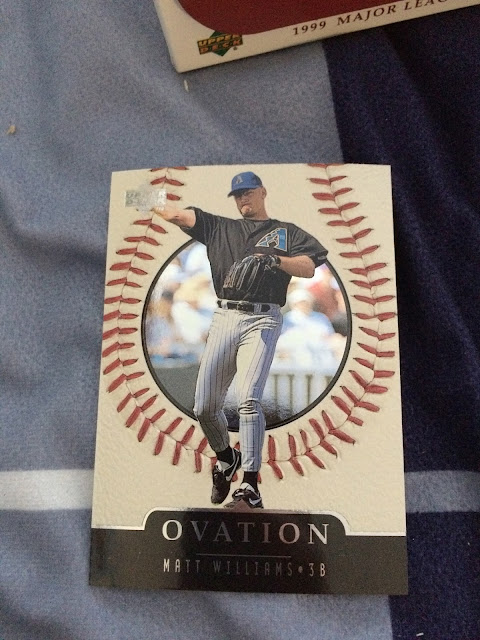 The 98 D-Backs uniforms just look hella cool. Even if someone like Matt Williams is wearing it. 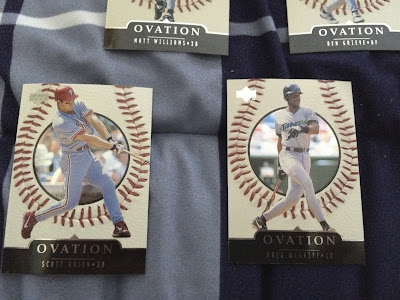 Scott Rolen and Fred McGriff, two guys who'll be in my collection until the end of time probably. 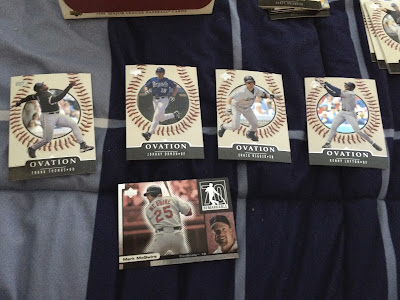 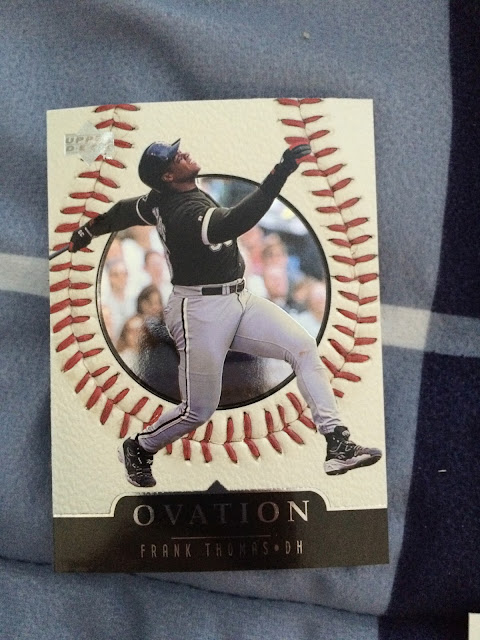 Frank Thomas just looks cool on this card. The whole swing is even cooler cut out of the circle. 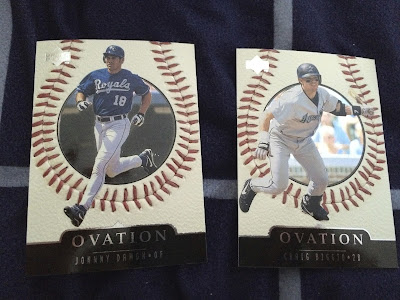 Johnny Damon as a Royal, still a cool thing to pull. And I do like the pop-out quality of the Biggio shot, too. 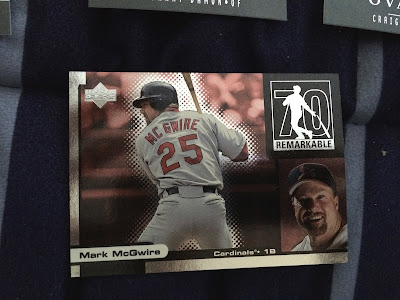 AH, YES, REMEMBER 1999, WHEN LITERALLY EVERYONE WAS GOING APESHIT OVER MARK MCGWIRE???
This is a multi-product insert set of Big Mac, commemorating the 70-HR season in 1998. It hasn't aged well, mostly thanks to the steroids thing. 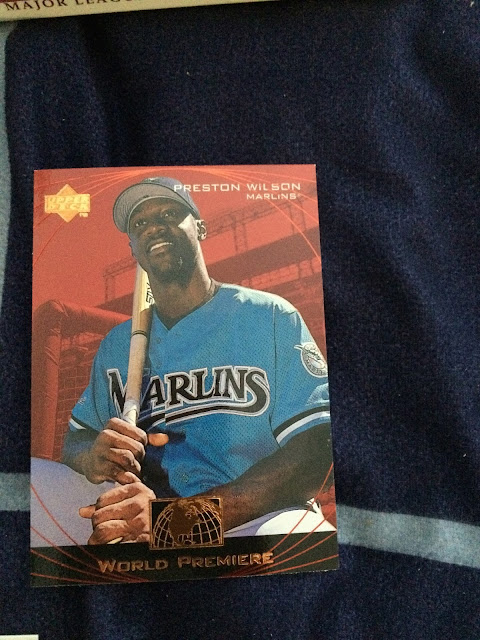 This is what the WORLD PREMIERE subset looks like, with Preston Wilson's rookie being showcased here. Well enough designed, with the colored-background standing out. 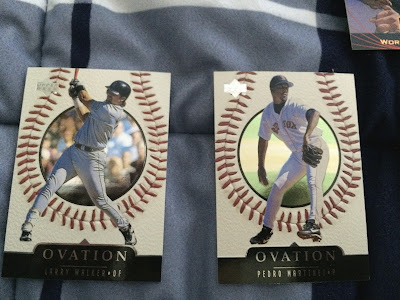 Larry Walker, another swing that looks great cut out, and Pedro Martinez, whose card is made better by the green-foil in back of him. 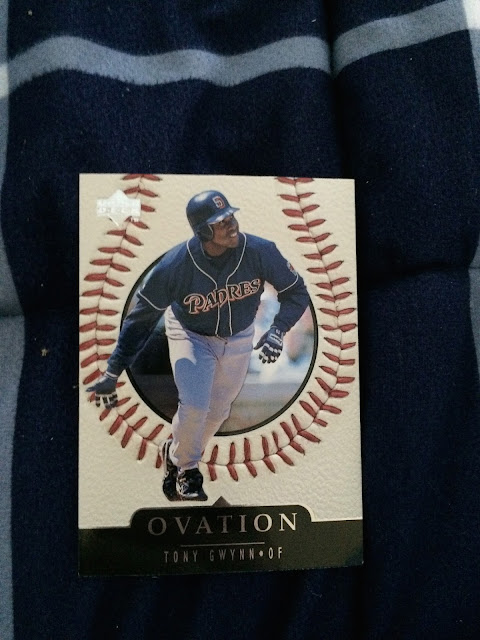 Oh, yeah, and another nice Tony Gwynn card. Glad to see he was still putting out quality cardboard into the last legs of his career. 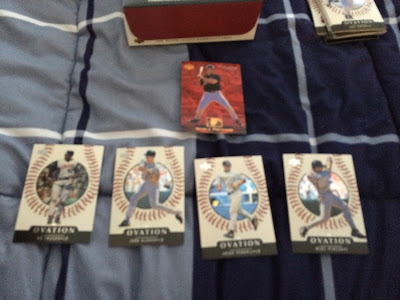 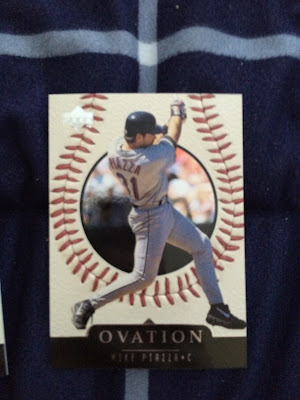 Nice card of Mike Piazza, but it was at the point in his career where you had to double-check which team he was playing for. 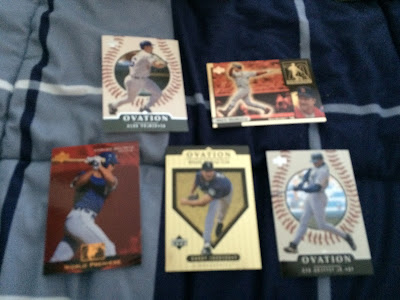 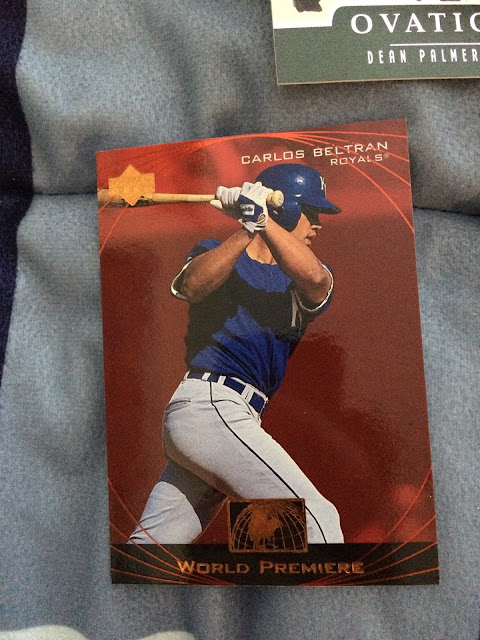 This isn't EXACTLY a Beltran rookie, but it's a nice early card of the guy, and a great red-flavored insert of him. 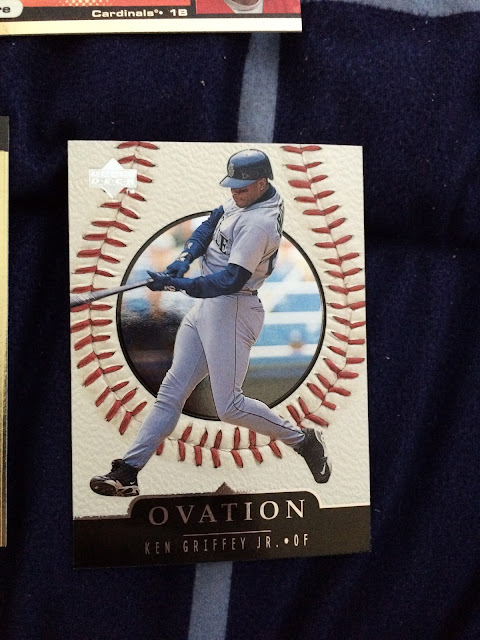 A base card of Ken Griffey Jr., which I will never say no to pulling cards of. 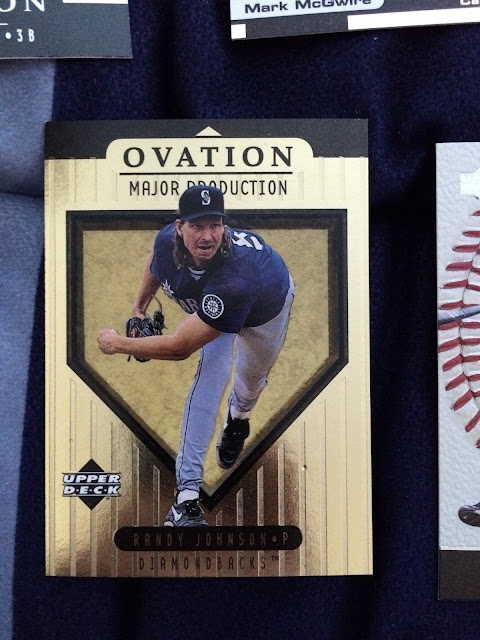 Let's see, what's wrong here:
-Pictured in a Mariners uniform
-He's pictured in an Astros uniform on his base card (trust me, you'll see it)
-He's listed as a Diamondback

That's 3 flavors of not right, and takes the sting out of a nice-looking foil-based insert. 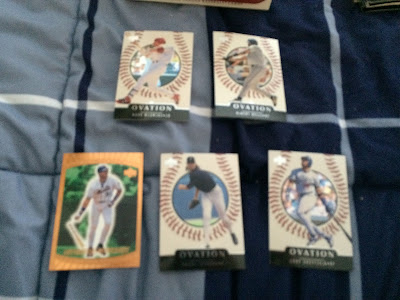 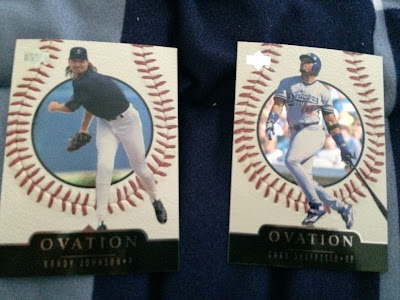 THERE'S RANDY JOHNSON'S BASE CARD! And he's an Astro. So there.
Gary Sheffield as a Dodger was a thing for a little while. 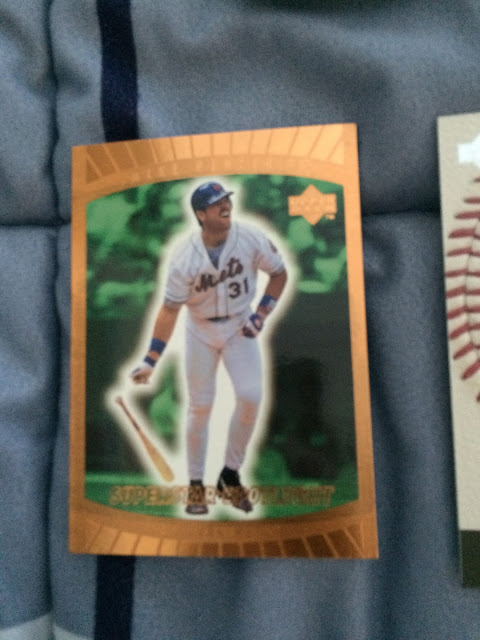 This is a Superstar Spolight insert of Mike Piazza, and...yeah, it looks pretty damn cool. 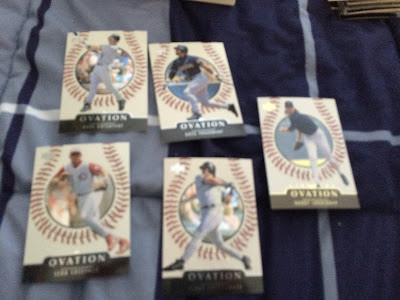 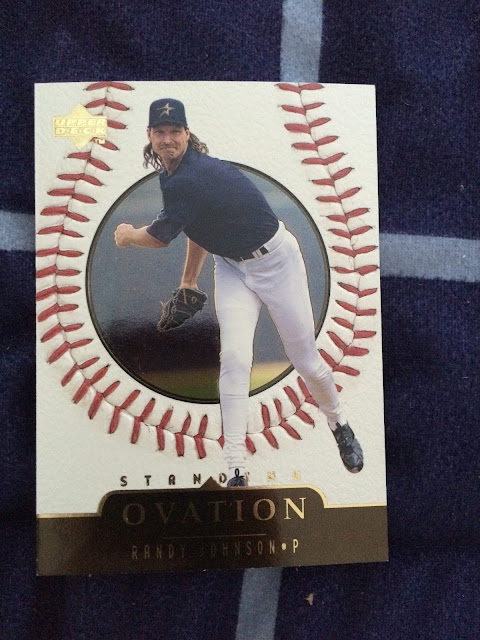 This may look familiar, but the gold plating is more pronounced, and the listing says something cool that I can't particularly read. And when you turn it over... 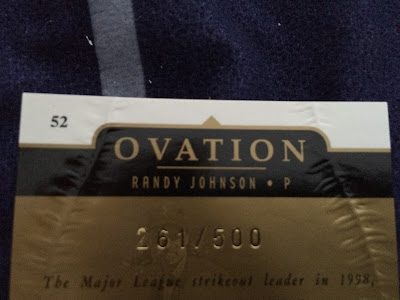 You find that you've pulled a parallel of a Hall of Famer numbered to 500.

Which is pretty damn nice. 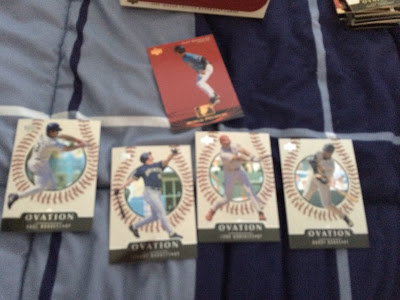 Pack 10-
Nothing really to call home about here, but I still proved my point.

This is a nice enough set, and it gives you enough eye-candy and semi-premium base cards to keep you satisfied, regardless of the 1999-ness and the UD-ness of it all. Still enjoyed it more than UD Choice.
Posted by Jordan at 10:08 AM