A Show of Hand 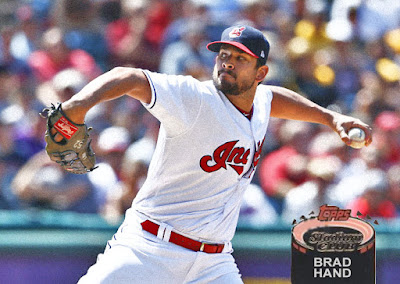 Well, not only are the Cleveland Indians headed to the playoffs for the third straight year, but they're doing so with more than one viable bullpen option. Because along with Oliver Perez's scarily consistent work, they also have the return of Andrew Miller, and Brad Hand as their new closer. Yes, Dan Otero can occasionally relieve a game without giving up 20 runs, but as long as they have that solid core, they're better off than they were in June.

Oh yeah, and they also still have one of the toughest pitching rotations in baseball. All four of the Kluber-Bauer-Clevinger-Carrasco combo have been churning out amazing numbers this year (with Clevinger the only one under 200 strikeouts, though he'll rectify that in his next start). And even if the fifth man has to be Shane Bieber or Adam Plutko, it's not likely they'll need to start them in the playoffs.

And yes, the lineup is still pretty great. The Indians have surprised me in that even if most of their outfield options have gotten injured, they've still gotten by on using Greg Allen, Rajai Davis and Melky Cabrera. To that end, this team has a pseudo-2016 feel to it- guys you wouldn't expect to help a playoff team being integral parts. And still, there's a 40-home run DP combo, an MVP on the bench, and some genuine talent pulling walk-offs. There's some under-the-radar dominant qualities to this team that may bring them a lot of good luck in their eventual series with the Astros.

Coming Tomorrow- It's looking like he may get the last Wild Card spot, which may or not spell doom for the rest of the league.
Posted by Jordan at 8:23 PM
Labels: Brad Hand, Custom Cards, Indians