That Which I Desire 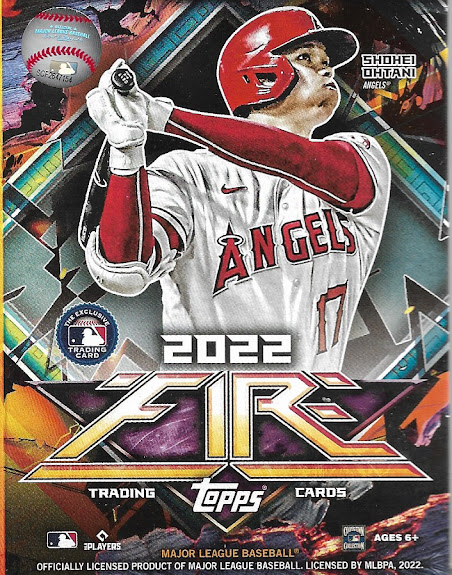 Not sure if y'all have noticed, but I haven't been buying a ton of cards this year.
There's a few reasons for that, if I can be candid:
1. Cards are still hella scarce at retail stores, and I've only gotten lucky a couple of times at Target or so. But then again,
2. I'm not really hitting Target or any other retail stores much often at all lately. Kinda staying in unless I really need to, working remotely does that. On that note,
3. Work. Lots of little jobs rather than one big one, and I haven't had as much of a card budget as I used to. So I just...haven't splurged as much. Which is at least good for my stability.
4. I'm also trying to figure out how to sell cards on eBay. I am...still incredibly scared of this because I've never done it before, and I don't want to do it 'incorrectly'. So there's stuff I have graded that I'm sitting on because I don't wanna put it out at the 'wrong time'. This shit is so difficult sometimes if you're like me and don't know the nuances and unwrittens of the hobby.
So I haven't gotten many cards at all in the last few months. Haven't reorganized my binders in longer. Been focusing mostly on making customs for the next two months. And then after that...I dunno.
But I had some gift card money burning a hole today, so I stopped at Target and figured that at this point they must have something. And they did. My choices were:
-Allen & Ginter, newly released.
-2022 Chronicles, relatively newly released.
-Topps Fire, which came out in, like...August?
No Archives or Update, two of the sets I hadn't found any of and was still looking for. Which kinda blue. But they did have baseball cards. And...a ton of hockey cards. But baseball cards.
So I went with the Fire because it'd at least be interesting. I'm gonna ask you at the end of this if I made the right choice.
7 packs here. 6 cards per pack, but some come with 7 cards because consistency apparently doesn't mean anything anymore. 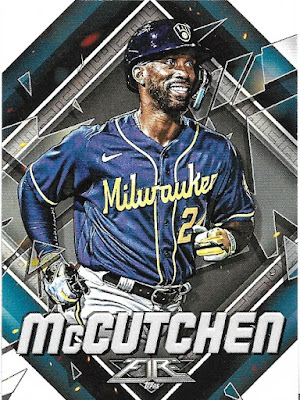 Pack 1- Seeing this guy right at the top made me feel somewhat alright with my choice.

So, like usual, Fire's base set is separated into 3 subsets, denoted by difference in design.This is the most striking of the three, using those reds and yellows to catch the eye. It's never not gonna be odd seeing legends like Hank Aaron on these designs. 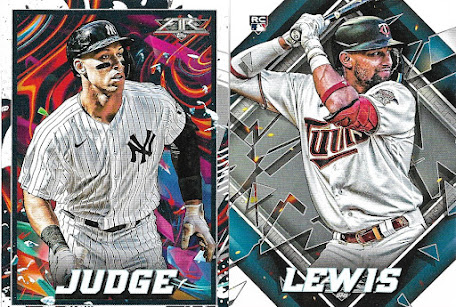 The other two. Like Judge's. Lewis's is similar to previous Fire designs.
Also, hey, what if this is the last time I pull a Judge card in a Yankee uniform while he's still a Yankee?

Pack 2- The good thing about this set is that it went to print as a little bit of the season had elapsed, meaning they could have updated uniforms like Jesse Winker's and Matt Olson's. 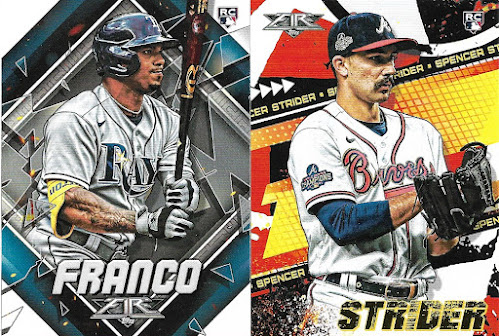 The other good thing about this printing in May or whatever is they knew Spencer Strider would be a thing this year, so they could make him one of the prominent rookies of the set. Alongside yet another Wander Franco rookie, which...if they're in every set, are they really that special, Topps? 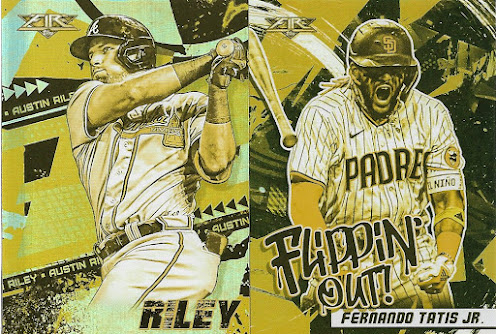 The big thing to look for in Fire blasters are these yellow, 'minted in gold' or whichever parallels. Unnumbered, but they look hella cool. Similar to the blue fire ones the set began with. Tatis's Flippin Out insert is seeded 1:20 packs, so those are pretty rare. 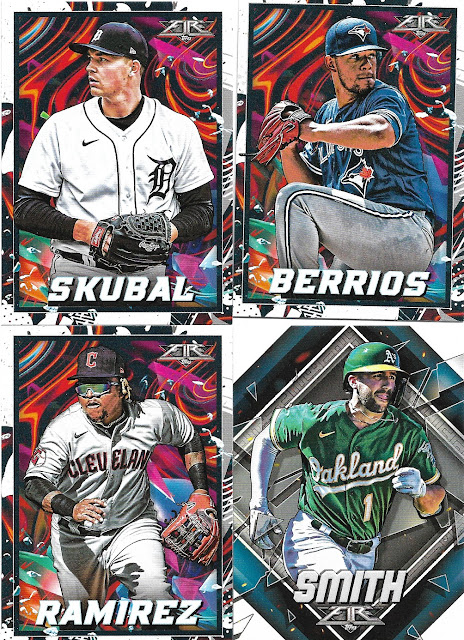 Pack 3- Here you find one of the downsides of this printing in May. When Fire went to print, Kevin Smith was still looking like a promising replacement for Matt Chapman. He petered off.

And while I see why Topps needed some Torkelson rookies ready, his season didn't amount to the exclamation points his promotion promised. Aaron Ashby's is a red base card parallel, unnumbered. Bichette's Fired Up insert just looks cool. This set does inserts really well. 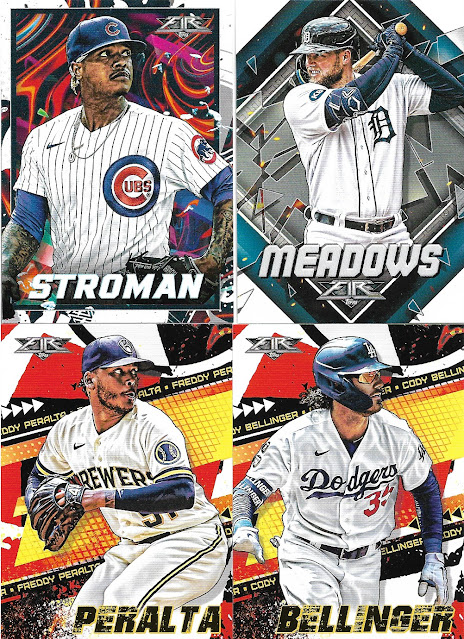 Pack 4- Meadows and Stroman look great in new uniforms. Bellinger's already looking for a new one himself. 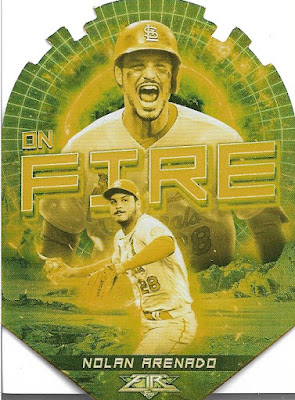 This insert...is frigging incredible, and it's the kind of wild idea I wish Topps did more. Reminds me of 90s Stadium Club inserts. I'll forgive the Cardinal, it's Arenado so I get it. Frigging awesome. 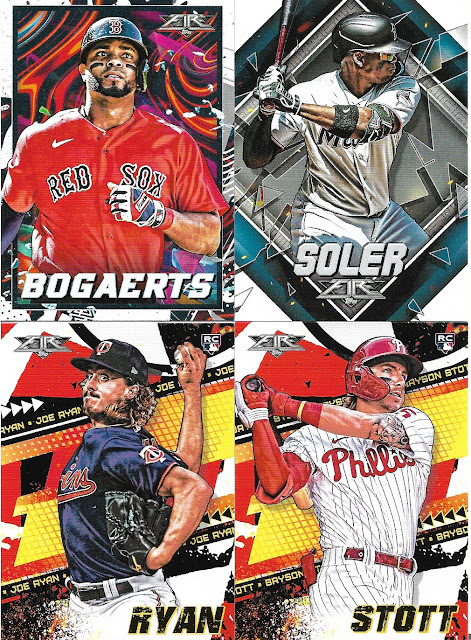 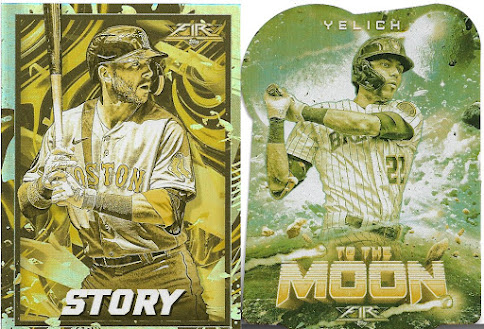 Story's is proof that the gold minting just lifts this set so much. And Yelich's die-cut To the Moon is, yes, another incredible insert from this set. I love it so much and want more. 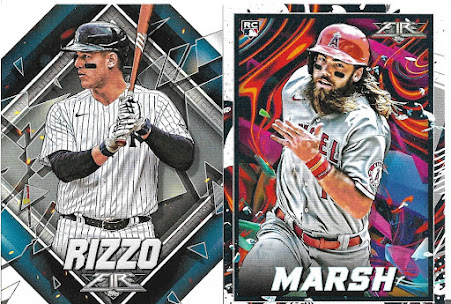 Two I was excited to find- Rizzo is becoming a Yankee favorite, and Marsh, though in the wrong uniform, is gonna be a fan favorite in Philly.
and then... 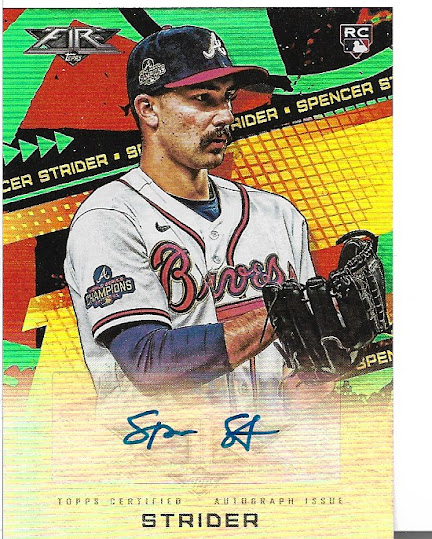 I...I mean...
That is an autographed card of the guy who placed 2nd in NL Rookie of the Year voting this year, and who got a 200 strikeout year for the Braves alongside Charlie Morton. This is...I'm dumbfounded. Spencer Strider is an insanely good auto pull in 2022, even if it is a sticker auto. It's both Topps picking correctly and me picking the correct blaster. I'm honestly impressed.
This is a green parallel auto, numbered to 75, and seeded 1 in 604 packs. I don't know if I've just had better retail luck in the last few years, but I never used to pull this many great hits out of retail product. This is definitely worth the [ballooned] blaster price. And now I have to figure out how to properly sell this on eBay. Lovely. 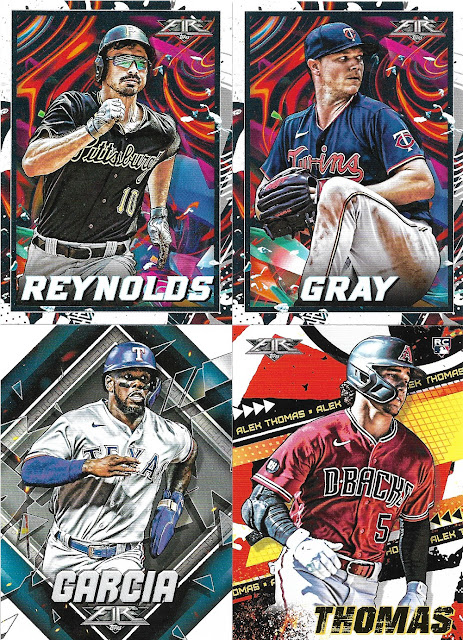 Pack 7- I forgot how early this year Alek Thomas debuted. 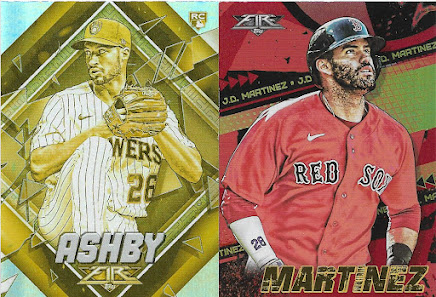 We end on two base parallels we've already seen in this blaster.
So uh...do you think I made the right decision here? Cause I sure did. Yes, Fire is a crazy set with odd logic, but the inserts are beautiful, I got great stars and rookies, and I pulled an autograph of one of the best young pitchers in the league. If I'm only gonna get cards every so often, this is an insanely good outcome to have.
Maybe things will increase eventually. Maybe I'll figure things out. But this definitely whetted my appetite for new product, and I'm alright with that.