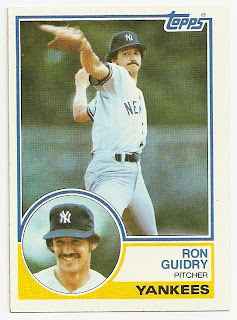 A few days ago I went to a Card Show down at the somewhat-local mall. I was stunned. Being that this was my first in a while, I simply looked first, THEN gorged! There were a lot of hot products- 2009 Topps, all the inserts, Numbered, Turkey Red, you name it- and a lot of products that were hot back in the day- tons of random Early 00's packs-.
In fact, my dad (Who came with me) answered a Trivia Question about Ron "Louisana Lightning" Guidry (He went to Guidry's first game. Talk about a Yankee fan) and we won a free Guidry card! I chose one of the only ones we didn't have:1983 Topps #440 (Above)
If that wasn't enough, I got a few packs of older stuff. 1995 Topps was a dead end, no need to show it (Dave Henderson and Ruben Sierra were the only ones I knew). But I ended up getting 2 packs of 2003 Topps, which I started back in the day but couldn't finish.
Pack One-
Lance Berkman- #230 Awesome! Still no Yankees though...
Frank Thomas #109 Great player, close to retirement, but cool. Where are my Bronx Boys
Hideo Nomo #93 Boooo! Former Red Sock! Get him out of here!
Hobby Masters Kazuhisa Ishii HM2 Who? Never heard of him! And how is he a Hobby Master then?
Tony Armas Jr. #149
Ruben Quevedo #111
This pack is beginning to smell- wait!
Greg Maddux- #105 NICE! Retiree! That is getting better
Jason Giambi #356 DINGDINGDINGDINGDING! Yankee in the house!
Not the best Yankee, but a Yankee nonetheless
Mike Mussina #190 Wow, another Retired Yankee. Now let's end it strong!
Brent Butler #241 The exact opposite of strong
Pack 2-
Geronimo Gil #131
Carlos Baerga #45
John Halama #280
Art Howe Manager #282
Fernando Vina #223
All except Baerga- who? I HAVE NEVER HEARD OF THESE PEOPLE!
Add the fact that I already have a Vina in my basement from 6 years ago.
League Leaders NL HR #345
Sosa, Green, and ANOTHER BERK! This pack wants me to move to Houston.
Future Stars Philly Marlon Byrd/ Jorge Padilla #322
Huh? A rookie of a kid who'll never get anywhere? Nah!
Future Stars Twins Michael Cuddyer/ Michael Restovich #329
Huh? A rookie of Michael Cuddyer? Things are looking up!
Future Stars Rangers Hank Blalock/ Mark Texiera #324
Huh? A ROOKIE OF A CURRENT YANKEE? This is bound to be my hit, right?
Future Stars Devil Rays Josh Hamilton/ Carl Crawford #325
(Jaw slowly drops)
Oh my god, this is the best pack EVER!!!! Aside from all those nameless people at the beginning, this ROCKS!
End with a checklist, something 09 Topps doesn't have!!

Wow, that pack blew my mind back then. That means that there are plenty more Card Shows to come!!!