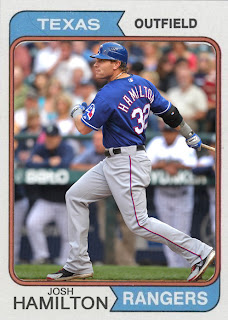 Josh Hamilton was long overdue for a custom. So I gave him one. Here he is, in all his division leading glory.

I don't know if any of you heard, but I was in Williamsport a few days ago for the Little League World Series. I was there for something a little more than baseball, something I'd rather not get into, but if you really want to know, check the 6:30 news with Diane Sawyer tonight. I think it's on there somewhere, although I might not be there by face.

It was a cool experience. I witnessed a close game between Taiwan (Former home of my dentist, Chien Ming Wang and Chin Lung Hu) and Japan (Former home of about 1/10th of the Major Leagues). It was tied by 2 and going into extra innings when an error by Taiwan sealed the deal for Japan, and yesterday they ended up winning the whole thing.

I also was pushed headfirst into the world of pin collecting. At these games, every team has little pins that they get, each from their own District, like District 13 is here in New Jersey, and there are other ones in Massechussets, Newark, New York and more. I ended up trading a few of my own pins for some from around the country, and I even got one of last year's Europe pins (Cause of my former German resident grandma). It's amazing, because the same way we trade cards, they trade pins. These guys have whol books of pins, and they take ours and we're allowed to pick from theirs. It seems like an awesome hobby, but not as awesome as the one I blog about.

Still it was an amazing experience. Just going as a spectator has been a dream of so many (My dad said he could now cross that off his bucket list), and only so few get to witness it in person.
Posted by Jordan at 9:00 AM
Labels: Custom Cards, Josh Hamilton, Little League World Series, pins, Rangers