Another Season bites the dust 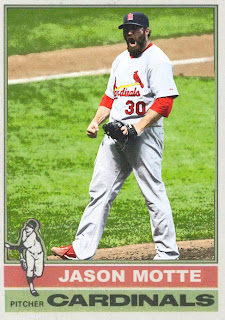 Figures that I have the closer to close the 2011 season out. Fitting too- I'm not too happy that the Cards won, but I'll deal. As long as it doesn't create a whole 70's A's kinda thing. But it was a great series, and I'm glad they won.

So what does this mean for me in November? Well, a few things. For one thing, I'll be posting about numerous trades that occur during the offseason. I'll be busting packs, mostly Topps Update, and some of the new football stuff. I'll be making some more longer posts whenever a controversial topic comes along (like the Buckner one from a few days ago). And, best of all, I'll be working on Year By Year Customs for December, and a new layout for customs in my room, which'll be next year's Blog Photo. And, in the midst of all this, I'll be turning 16 in November. So, busy month for me.

Another thing I'll be doing, from now until the start of the season? Checking this
Posted by Jordan at 10:55 AM
Labels: Cardinals, Custom Cards, Jason Motte