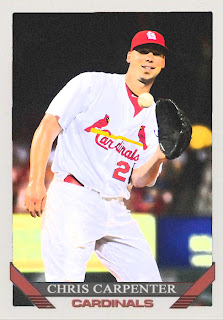 The ball cracked off the back toward lower right field. Howard ran to first and hurts himself 1/4 of the way there. Punto recieved the ball, and tossed it to Pujols. Howard collapsed in a heap on the first baseline. Pujols, Punto and Carpenter collided for a bearhug, and the rest of the team followed.

I sighed, sadly, as I looked for a rule calling that would render the ball foul, of that Howard's injury would incite a do-over. But as the Cardinals began dousing each other with champagne, and as the angry members of the crowd sauntered out of the stadium, depressed that they had come this far only to lose, I realized that wouldn't happen. I flipped off the TV, and, because as a teenager this is my first instinct, ran to Facebook. Everybody I knew was saying the exact same thing "It was Howard's fault, and he should be traded". Okay, maybe people didn't say it in all Caps, and with the right spellings and punctuation, but they all spoke loud enough to irk this proud baseball fan. I had no choice but to post something true: "There's always next season". Despite the fact that it was the truth, it got less likes than the guy saying "Howard did this because he wanted to stay true to his hometown".

Still, as I sighed heavily, I realized for the first time since the terrible postseason of 2007, both of my teams had been knocked out in the first round of the playoffs. We all remember 2007, where the Phillies fell victim to the Rockies, who would later lose the series, and the Yankees fell victim to the Indians, as well as the Flies. And the sad thing is that nobody expected the other teams to win then either. The Yanks and Phils should have kept going on, but they were defeated.

This also incites something I hadn't even thought about until last night: Who do I root for? The four teams still remaining in the playoffs are all not favorites of mine. Three of them have defeated my teams in the playoffs. The Brewers...they're just the Brewers.

Still, it's gonna be hard to watch this postseason, now that both my teams are gone, and there's no one good to root for. Bring on the offseason...let's get the Yankees some more pitching.
Posted by Jordan at 11:19 AM

Labels: Phillies, Playoffs? They can't even play a game, woe is me, Yankees